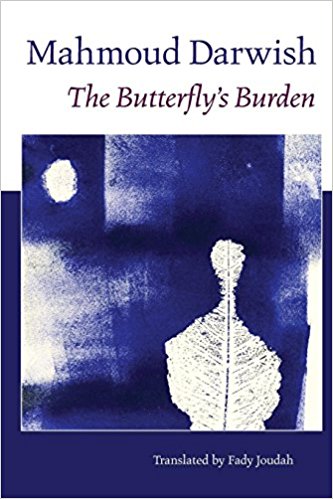 Do not interpret my words / with a teaspoon or a bird snare…
—Mahmoud Darwish, ‘State of Siege’

Mahmoud Darwish’s writings are aimed less at impressing scholars and reviewers than at sustaining the longing for justice of what western commentators sometimes patronisingly refer to as the ‘Arab street.’ He sees himself as a medium through which the traumatised historical experience of the contemporary Middle East gathers itself up and reflects upon itself. His poetry is not for capturing, dissection, and labelling, but for participating in. Darwish’s audience, built up over four decades of writing and engagement, praises his work through their continuous reading and sharing of it.

Darwish’s return to Ramallah in 1996 after decades of the enforced wanderings common to many an écriture engagée of the 20th century prompted the desirous outpourings of The Stranger’s Bed, the first in the trilogy of books excellently translated here by Fady Joudah, himself an award-winning poet, under the overall title of The Butterfly’s Burden.

There is no limit to me
if I want.
I widen my field with a grain of wheat and
widen this space with a Turtledove. Let my
body be my country
—’Drought’

A bit of night near you is enough for me to get out of Babylon
and into my essence—my other. No garden for me within me
and all of you is you. And what overflows from you is I the free
and the kind.
—’Sonnet III’

Love is presented as a state of endless openness and dissolution in which things are in a continuous flow of mutual penetration and redefinition. Meaning and identity, self and other, life and death, fathers and daughters, soldiers and victims, all give way and swap places before Darwish’s synergising vision. Nothing stays within its own bounds. Everything flows.

when you walk barefoot rhyme abandons
copulating speech, and meter breaks in the climax of experience
—’Sonnet III’

and I move into you as astronomers move
from one planet to another.
My soul looks upon my body through your ten fingers…

Darwish shares this visionary elucidation of an undetermined world in ceaseless flux with another great work of the anti-imperialist canon, Pablo Neruda’s Residence on Earth. As Neruda does in his classic work, Darwish transforms the experience of exile into a visonary condition. Permanent homelessness, rootlessness and instability afford the poet an affinity with and insight into the quantum indeterminacy and flux which is at once the reality and the mystery of existence.

But Darwish does not write merely in order to proclaim the undoubtedly superior powers of his own personal perception. Indeed, ‘the personal is political’ in the Middle East in a way which may be incomprehensible to those who have not directly experienced war. There is no academic reverie of pure intellect, no Kavanaghesque parish idyll into which the middle-eastern poet can dreamily wander in order to evade the impact of world politics. In the Middle East the personal becomes political in the form of an electrode attached to your extremities or a bomb bursting through the roof of the local hospital.

Darwish’s figuring of a borderless and boundlessly eroticised imaginary universe stands in defiant contradiction to the armed imposition of unnatural borders and the continual repartition of the Middle East according to the priorities of Western Imperialism. His foregrounding of mutability and the transforming powers of desire and the poet’s language is aimed at provoking a consciousness of and a hope for a political metamorphoses, at fuelling the desire for a future free of waterboarding and cluster bombs, and yes, needlessly and deliberately massacred infants:

another day will come, a womanly day diaphonous in metaphor,
diamond and processional in visitation, sunny, flexible, with a light shadow…
—’Another Day Will Come’

The daily reality of Israeli state terror in Palestine makes itself felt in State of Siege, a series of poems written out of and reflecting on the carnage and encirclement that followed on the Palestinian uprising of the year 2000. These short, aphoristic lyrics effectively communicate the alternate moods of frustration, resignation, anger, vengeance and despair which are the lot of the besieged. They offer us a vivid psycho-geography of what it is like to live, among thousands of others, literally at death’s door: ‘The soldiers measure the distance / between being and non-being / with a tank’s scope.’

In State of Siege Darwish shows how the poet’s art leans heavily under historical duress but continues to fly as a sign of hope to his besieged community. This is the butterfly’s burden of the title: ‘To resist means to be certain of the well-being / of heart and testicles and of your chronic illness, / the illness of hope.’

In the last of the three books, Don’t apologise for what you’ve done, Darwish continues and expands his lyric meditations on the ménage à trois between the poet, hope and history. In the effusive opening lyric ‘Cadence chooses me’ Darwish informs us that:

Cadence chooses me, it chokes on me.
I am the violins regurgitant flow and not its player I am
the prescence of memory.
the echo of things pronounces through me
then I pronounce

What different people see as the function and aim of poetry is always rooted in material contexts. In Ireland poetry answers no urgent social need. Darwish, on the other hand, is responding to the overpowering need for someone who is definitively not a paid liar or lackey, and who shares in the general antagonism to the temporal powers, to articulate the howling rages and sorrows just about everyone in the Middle East must feel. No wonder Darwish feels that powerful forces beyond his control are flowing through him. This experience, of a poet being actually necessary to the moral and spiritual sustenance of a people, has long been either unavailable to or unwanted by Irish poets, though its absence was the subject of a great longing in Michael Hartnett’s luminous Inchicore Haiku.

In the end I would not like to try to describe the experience of reading Darwish as much as recommend it for those whose minds—and bodies—are open to exploring a poetry that, in its form and subject matter, its politics and its artfulness, its intentions and effects, is genuinely different and thrillingly superior to what we have become accustomed to over here in our most serene republic of peace and prosperity.

A Prayer for Nikos Kazantzakis