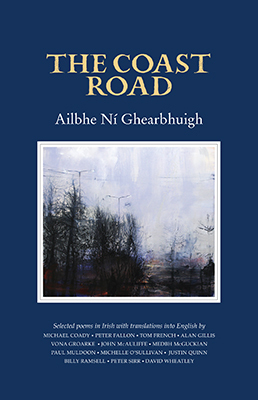 What do we expect from our poets? Maybe originality would be a start, or even the unmistakable clear clip of a new voice. Ailbhe Ní Ghearbhuigh is not entirely a new voice, although her poems ring as if they have been often welcomed by the dawn. She has already published two significant collections, Péacadh (2008), and Allagar just last year. Many of those poems feature here and have been ably, or wonderfully, or fascinatingly, or intriguingly, or brilliantly, or otherly translated by many of our best poets.

One is torn between talking about the poems themselves or their translations. Irish speakers, because they are too lazy or crass to buy the original collections will at least see what they have missed, and lovers of Irish poetry in English will be able, thanks to the never-ending dedication of The Gallery Press, to delve into that other realm of ours, which often remains a mystery.

But this is not a zero-sum game. There are goodies on every side. Despite her two sharp and lyrical collections, it is too early to say which way Ailbhe Ní Ghearbhuigh is going to go. I am not sure that she knows herself, which can only be a good thing. These poems are crafted with a precision which reminds you of one of those stone walls on the Dingle peninsula which might crumble and fall if one precious piece was removed. But they never do. This is what makes them solid, with a centre of wonder beckoning to whatever is beyond.

Apart from ‘Ceathrúintí na nÉan/Bird Quatrains’, which is a sequence, only two poems in the collection sneak onto the second page. This implies a compact mind and an incisive vision, which is exactly what we get. They are always epiphanies, grabbings of what is out there, even when they cannot be entirely grasped. Ní Ghearbhuigh’s world is one of precise moments, measured and watched with a sympathetic sensibility – especially towards the little creatures; birds and bees and ladybirds – a sympathy which is never twee or sloppy, always aligned with what has been seen and felt. And then there are the bigger personal poems of occasion; some of memory, or of love, or the music that never happened.

But you will want to know how the translations match the originals. Given that there are thirteen translators it wouldn’t be surprising if they were a mixed bag with different bridges across the languages. How translations work is always a matter of feeling. Although Ní Ghearbhuigh’s Irish is always accessible, she feels words with all of her senses. Her words can dig in beyond the books and call up acoustic meaning beyond the dull and literal, which is always the same.

Therefore a poem such as ‘Conriocht’ with its carefully-hewn vocabulary had to be matched with similar guts and style. ‘A Wereing’ is as smart as you can get for the title. Beyond this the terrain gets rough. The original clobbers you with words you feel – ‘screablach, ag glámadh, ar shiolpa’ – and while the English does not match these it introduces others that are left unanswered in the Irish – curs, and blorts and caterwauls. This is ultimately what poetry is about, smelling the wind with the nose of the unsniffable.

There are a few double translations which seem to imply an uncertainty in the first breath: Justin Quinn does ‘Bóín Dé’ twice, one kind of literal, the other off on an understandable skite. These doubloons point up the contingency of translation, and yet it need not always be so.

There ain’t nothing perfect, of course, but there is integrity and cohesion. You feel that Alan Gillis’s ‘Grand Matinée’ is bang on the button, while Billy Ramsell’s ‘Return from Antarctica’ / ‘Filleadh ón Antartach’ is as cool and cold as its subject matter, freezing us into acceptance.

And yet there are those that evade the original. There is no getting away from this. In the Irish there is an assumption that we are familiar with many cultural echoes. Seán Ó Ríordáin appears in ‘Tuairisc ón nGealt-teach Iargúlta Laistiar den Ré’ / ‘Report from the Madhouse Behind the Moon’ and other echoes reverberate down back throughout the lines. But then again ‘Tuathal’/’Anticlockwise’ is probably untranslatable in its word-play and punnish penning.
Paul Muldoon as ever gives us a classy rendering of ‘Foláireamh’ / ‘Warning’, much of it as loyal as a lodge, but with a great twist just to make it his own.

But then again, this collection is not about the appropriateness (the most ugly word in the English language) of the translations, it is about what you get as a reader of poetry. You get a new voice – one that is attentive to nature, to the world, to those moments in which we find ourselves, and one which is sprightly with a hint of devilment. In fact, this light touch behind the sharp observation is often matched by a springly tread in the metre, a tread which is largely borne out in the translations. The cadences in Ní Ghearbhuigh’s poetry are always her own, and these can be brought across the bridge of language without much loss, while the echoes of the language are the ghosts which never can appear.

The great thing about Ailbhe Ní Ghearbhuigh’s work is that she is not there yet. This is meant as a compliment. In other words, each poem is still a unique thing, a piece of itself, it hasn’t been completely Gearbhuighed. While absolutely recognisable, they are not, just yet, entirely characteristic of her. There are poems here that cohere down to the last syllable. There are lyrical jewels. But the internal voice is waiting publicly to be heard louder and clearer.

Alan Titley has written novels, stories, plays, poetry, essays and literary scholarship. His latest book 'An Bhean Feasa' which is based on the life and hanging of Goody Glover executed as a witch in New England is the longest poem in modern Irish. He is Emeritus Professor of Modern Irish in UCC and a member of the Royal Irish Academy.

Philosophy of a Fly