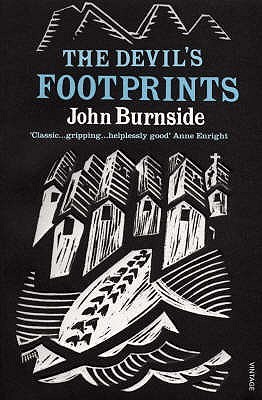 Coldhaven, the setting for John Burnside’s new book, is also the setting for a curious myth. Many years ago, while the town slumbered in the midst of a heavy snowfall, the devil passed through, leaving dark hoofprints in the snow for the town to find in the morning. The marks emerged from the sea and continued in a straight line through the town, up over the roof of a church and back down, finally disappearing into the fields beyond.

Years later, Moira Birnie locks herself and her two sons in their car, killing them in a blaze of fire because she believes her husband to be the devil. Mike Gardiner is externally linked to these events having killed Moira’s brother, Malcolm Kennedy, as a child and perversely having a romantic relationship with Moira sometime after.

As the story unfolds, Mike finds himself dealing with a failed marriage. He turns to Hazel who happens to be Moira’s surviving daughter, and as mathematics would have it, possibly his daughter as well. Declaring himself to be ‘electively insane’, Mike leaves everything behind and risks kidnapping charges to go on the run with Hazel. He never finds out if she is his daughter, but while suspecting as much he allows a significant amount of sexual tension to build between them.

No one can accuse Burnside of lacking a perverse and entertaining imagination, but perhaps more intriguing than the plot of The Devil’s Footprints is its style. The novel opens with a dizzying sentence, spanning an ambitious eleven lines, threatening to tear apart at its seams. That it holds together is nothing short of miraculous. While the sentence holds up perfectly on its own, it falters in the greater context of the work. The appearance of such sentences is sporadic and out of place amid their smaller counterparts, exposing a lack of consistency in the prose.

Yet this apparent lack of consistency can be forgiven in Burnside’s case. He is first and foremost a poet. His poetic prowess allows him to manipulate sentences with a skill matched by few, resulting in descriptions of vivid clarity, like his image of domestic ‘hell’, confronting the reader with:

Big Alec sitting with his paper, licking his dry little piggy lips and muttering to himself; the dog coiled and twisted like a contortionist, licking its balls in front of the coal-effect fire; the wee ones squatting around the television set, covered in dirt and spaghetti hoops, like Japanese game show contestants.

Burnside has a flair for taking a hideous vision and presenting it in a horribly beautiful way. The unpleasantness of the scene is obvious, but the beauty of the style is not lost either.

This style matches thematically with the book, which deals with the dichotomous existence of man. Nothing is ever black and white. Instead, there is ‘shadow and light, compliments rather than opposites.’ The nature of sin is called into question, as good and evil walk hand in hand. No action ever seems to be entirely one or the other. Moira’s murder-suicide was an evil act prompted by the desire to rid herself of that very evil; Malcolm’s death was an attempt by Mike to do the same.

The novel ends with Mike explaining that there are two stories describing where the devil’s prints led. One story has the devil’s path leading somewhere else—to another realm not of this world. In this version, God lives in the world of man, so He and the devil are kept apart. Man is made in God’s image, so man is good. But there is a second ending, where the devil has only hidden and remains to give ‘fleeting hints of a terrible beauty and a terrifying wildness. The devil they knew and the devil they didn’t know.’ Throughout the novel Mike catches glimpses of something in his peripheral, always unidentifiable and just out of reach. These are glimpses of that terrifying wildness. Evil is forever lurking where there is good, not opposing it, but existing with it, complimenting it.

Multi-layered, and written with an elegant, folkloric feel, The Devil’s Footprints is John Burnside’s strongest prose effort to date. It is a story that will remain imprinted in your mind long after impact, like hoofprints in freshly fallen snow.

Anthony Donnelly is an English student in Ontario, Canada. This is his first publication and he thanks The Stinging Fly for the opportunity. He is currently working on his first novel.

The Glorious Heresies (An extract)

They Judged Her Tears As Milky, For There Was Something Them Extra to the Tear