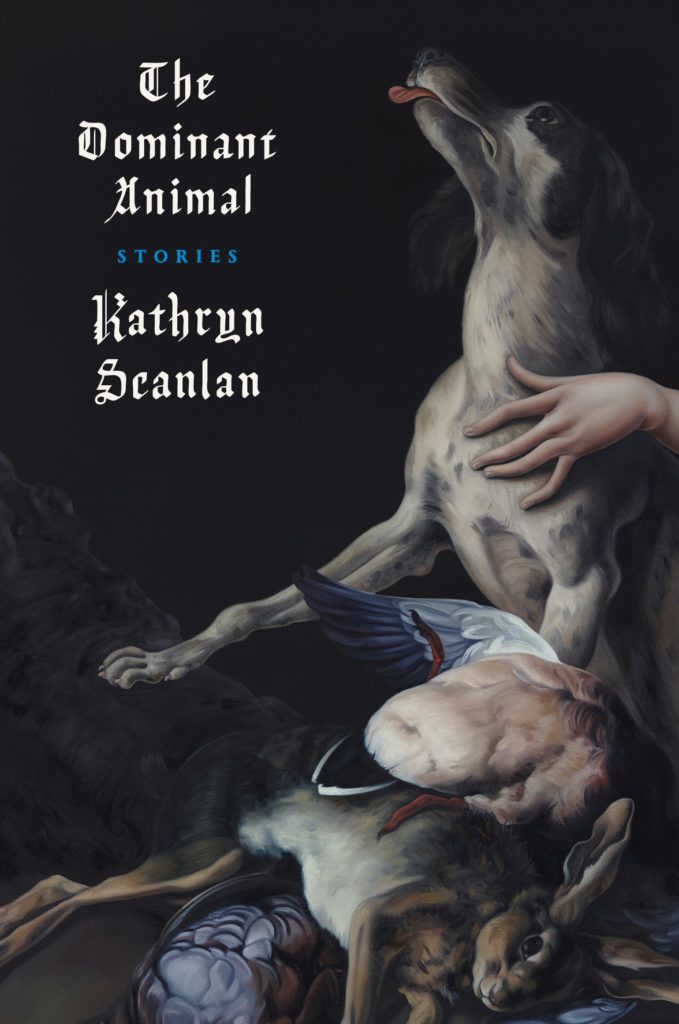 The Dominant Animal, Kathryn Scanlan’s debut collection of short stories, is an incredible work of world-building despite its deceptively slim size. Its forty stories work together to ‘deepen and darken’ (a phrase by Christine Schutt that is quoted in Scanlan’s ‘Notes on Craft’ published in Granta) the world in which they are set. The stories rarely go over four pages and are often a single page. They fit the mould of flash fiction, but ‘flash’ suggests a momentary experience; this collection builds a complicated world, one that exposes itself piece by piece. Individually, the stories function as poetry does; the sentences are used as vessels for meaning, filled precisely to the top without ever spilling over. Their brevity belies the vast network of insinuations that these stories create as a collective; an interrogation of the book’s world, and as a reflection, our own. The most prominent investigation being: who or what is the dominant animal?

On the first page we are presented with an anthropomorphised cow and invited to question: “why do they want that cow to look like a human woman?” This is something to consider as we discover that animals feature throughout: dogs, cats, deer, horses, mice. They are subject to cruelty and objects of great pride and affection. Through them, the reader is encouraged to understand the characters. The animals form the lower layers of hierarchies that are constantly presented, always shifting in their formation and logic. In ‘Men of the Woods’, The Father

… watched the ducks and deer and squirrels and songbirds. He wanted to touch them all – so he brought his rifle. Afterward, he kneeled and laid a hand on the warm body until it cooled. The bodies taught him the important things of life.

This kind of behaviour is standard for the men in the book; their violence and cruelty is enacted without care or awareness. Their actions are driven by an apparently innate need for power and control, a need that resists self-reflection. Following a description of a surgeon’s unintentional maiming of a mouse, the last line of Shh describes the reflexes of these behaviours for us:

You’ve seen this move before – some man, overcome with shame, unable, for selfish reasons, to look at what he’s done.

Scanlan’s detached, un-moralising depiction of these acts serves not as a sermon on the evils of men, but as a blunt presentation of reality. Naoise Dolan was recently quoted in the Guardian as saying, “I aim to observe, not empathise”. Scanlan also steps back from her characters in this manner. There is a sense of amused detachment from their actions. We watch from outside and above; though at times we gain proximity, the characters are never quite inhabitable. This is not their purpose, we are not supposed to confuse them for ourselves.

The women of the book are often too preoccupied with their own personal struggles and situations to dwell long on the incessant clumsy destructions of the men. They live lives that are marked by dissociation, fulfilling familial roles in a manner that highlights disconnection rather than connection. Like the reader, they are observers rather than participants in their own lives, relationships, existences. This speaks to an idea of disengagement that goes hand in hand with the increasingly individualistic society created by late capitalism. I found myself considering what this disconnection could mean, why this feeling of dissociation seems so prevalent in literature written by contemporary women? From Nicole Flattery to Ottessa Moshfegh to Lucy Sweeney Byrne, there are many female protagonists being written who struggle with connection and belonging. Perhaps it is something to do with the way in which women have been expected to be passive contributors but not necessarily active participants in society. This conflict between passive and active is nothing new, though it seems to me that the recent upsurge in protagonists for whom connection is a concept rather than a given speaks to how young women are still struggling to find their place. Identities have become more disparate and those of mother, spouse and lover – categories into which women had until now been invariably placed – are no longer definitive.

The women frequently find themselves in danger. Two of the stories in the last section feature mothers and daughters who are being targeted by men around them. In ‘Fable’ the daughter is abandoned to her fate with a butcher who, on his first encounter with her, considered swinging a large iron skillet against her head. She is powerless to the butcher’s machinations and dies suddenly, without explanation or description, as if her young death was something commonplace and to be expected. Her father befriends the butcher upon meeting him at the funeral. They compare stone skimming techniques: ‘… the men understood it, the trick was to hold the thing lightly – tenderly – and then, with a swift jerk send it spinning.’ In ‘The Poker’ a mother finds herself forced to defend her daughters from sexual predators and herself against incompetent doctors. (The line spoken by an old doctor about to retire really struck a chord: ‘I’m so sick of all you women he said.’ A sentiment often encountered but very rarely uttered.) This mother strikes back, however, arming herself with a poker in an act of defiance that startles the order of what has come before. The woman’s desperate need to protect her daughters from male violence disrupts the slowly layered understanding we have of the familial detachment and hierarchies in the book. It is no coincidence that the mother arms herself with a blunt instrument, whereas on the previous page she slices herself to the bone with a knife. She is not as equipped for battle as she is for self-mutilation, but still she is fighting back.

All of the characters are engaged in consumption. Food features constantly, from egg plates to a bowl of potatoes; dishes are a stand-in for emotional expression. Even the way people eat is scrutinised:

Here was a group of individuals who took their time with food and did not appear to derive any particular pleasure from consuming it. In a corner, the dog daintily took its kibble, coin by coin, and never approached the table to beg.

Food defines the relationships in these stories. Characters often overeat; a couple in ‘Beef Hearts Trimmed Of Fat, Braised’ frequent all-you-can-eat buffets where “you made your selection, and it gave you a sense of yourself.” Another couple in ‘Please’ struggle with the male partner’s constipation, he tries to “force it out” by eating baguettes and salami, eventually leaving “a clump – oily and black” on the floor, and afterwards suggests soft yellow cheese for dinner. The inevitable circularity of consumption and defecation is re-established, another feedback loop maintained, keeping the characters held in place by their base and repetitive needs.  For this is truly the driving force of the collection – time and patterns. Each story is a cog in motion to contribute to the machine of the collection. As individuals the characters’ actions are predetermined by their environments and their environments are driven by the collective actions of its participants. Relationships, generations and networks are formed through necessity to feed the machine. The fuel (food, sex and sensation) is continuously supplied so a balance can be achieved between the characters and their surroundings. Their disorder creates order when we scale up; the patterns of mindless consumption and cruelty are part of the machine and its movements. Through these small snapshots we are provided with the greater narrative. Like a magic eye painting, we’re required to step back and relax our eyes to see the full effect.

In between the visceral acts in The Dominant Animal, Scanlan provides us with moments of slant beauty; in ‘Please’, the protagonist observes:

Later, at the entrance to a park, I stood before a pair of pillars topped with a pair of heads – a man’s and a woman’s whose noses had been chipped to snubs – and on the woman’s crown of cold braid was a pigeon, releasing from its undercarriage a loose white drib that slid down the woman’s cheek like a teardrop.

Extract this passage and it’s a stand-alone poem – metrical, with its own poem-sense – but within the larger story, it functions on many levels, a reflection on the couple’s lives. This serves as an example of just how careful Scanlan is with her writing; nothing is loose or extraneous, everything must serve its own purpose, if not many. The harmony and sparseness of her writing accentuates the complexity of the world it builds. There is a quiet beauty in this. So much of this book is about over-consuming, but with the work itself, Scanlan is careful to use language sparingly.

And what of the eponymous animal? Its identity is unclear; it is more that the idea of dominance itself is investigated thoroughly in its moral frailty and pettiness. Scanlan’s world draws to a close with a direct line:

All of this is just to say I have seen mine enemy upon the earth – and I smote him.

This line encapsulates what Scanlan’s mission is in the book. She wants us to see the world and our enemies clearly. The nuances of their badnesses, their motivations or lack thereof. She gives us an opportunity to see the base elements of humanity that are so often obscured or softened by the veneer of ‘civility’. In The Dominant Animal this veil is lifted in order for us to see the brutality of what is underneath. As a reflection of our current epoch, this is justifiably a strange, and at times, unsettling book. Scanlan’s approach to writing – her dedication and attention to craft – is apparent in what she has produced: a small book that is deep and dark.

Emily S. Cooper’s work has been published in Banshee, Hotel and Poetry Ireland Review, among others. She was a recipient of the 2019 Next Generation Award by the Arts Council of Ireland and her debut pamphlet comes out with Makina Books this year.