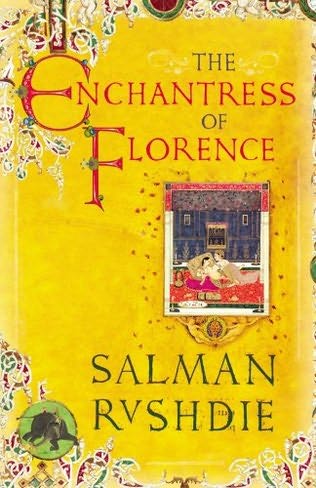 The Enchantress of Florence

On page 140 of Salman Rushdie’s new novel, a man calling himself Mogor dell’Amore (‘the Mughal of Love’) declares, ‘I am attracted towards the great polytheist pantheons because the stories are better, more numerous, more dramatic, more humorous, more marvellous; and because the gods do not set us good examples, they are interfering, vain, petulant and badly behaved, which is, I confess, quite appealing.’ It’s difficult not to see in this a paradigm for all of Rushdie’s art. He clearly intends his novels to embody a pagan fruitfulness of vision. The tenets of his work, from Midnight’s Children onwards, have been the dramatic, the humorous, and the marvellous. He writes children’s fables for adults in which badly-behaved gods fight and fornicate, deceive and desire. In the words of newspaper lit-crit, he is a Magic Realist—one of those labels whose use betrays a shallowness of understanding, for in fact Rushdie is at once more pragmatic and more dreamily poetic than most of the fiction that gets itself described as Magic Realism. Perhaps understandably, Rushdie is deeply concerned with the strictures and stresses of realpolitik. His latest work, like all of his fiction, is concerned with storytelling and power—the sacred power of story versus the profane exercises of worldly authority.

The Enchantress of Florence borrows its founding conceit from the Thousand and One Nights. Like Scheherazade, the Mughal of Love must tell a story to save his life. He arrives in the fifteenth-century court of Akbar the Great, the Mughal Emperor, dressed in a leather cloak of parti-coloured lozenges from which hidden items may be removed as if by magic. The Mughal solemnly claims to be the uncle of Akbar—and hence a part of the Mughal Court. But this is a novel in which names change, for reasons political and emotional: the Mughal’s real name is Niccolo Vespucci, and if he is to avoid a sentence of death, he must prove to the Emperor that he is not merely a Florentine impostor, and that his claim of imperial consanguinity is valid.

Rushdie’s prose, in this work, depends on the careful deployment of cliché: not the clichés of genre fiction, nor the mass-media clichés he has on occasion (in Fury, for example) been guilty of perpetuating, but rather the tropes and formulae of fairytales and myths. In The Enchantress of Florence, a woman is not simply beautiful; she is ‘the most beautiful woman in the world.’ Characters ‘clutch at their brow’ or leap up ‘like a moonstruck youth.’ There are wicked stepmothers and a palace pool whose surface—stormy or calm—reflects the state of the Mughal empire. The experience of reading the novel is, somehow, comfortably familiar. Rushdie’s prose is hospitable to miracles expressed in homely terms—like a children’s story, which The Enchantress in many ways resembles.

Like The Satanic Verses, this is a novel about the collision of East and West. The story begins at a moment when both worlds are experiencing rebirth, and much of Rushdie’s narrative involves the subtle construction of parallels between Akbar’s court and the Florence of Machiavelli and Botticelli. There are several sly rebukes to Western arrogance. When the Mughal of Love tells Akbar about ‘the new, heliocentric model of the universe,’ he speaks ‘in a low voice, because it was a concept which could still get a man burned at the stake for heresy back home.’ Akbar laughs, and replies, ‘This has been known for hundreds of years[…] How backward your reborn Europe seems to be.’ But The Enchantress is chiefly concerned with sameness: the Mughal Court proves just as vulnerable as the Florentine Republic to the charms of the eponymous Enchantress, a daughter of the Mughal Court given as a spoil of war and eventually captured by a warrior of Florence and brought back to Renaissance Italy.

The novel’s picture of Florence comes to us through the eyes of Niccolo, ‘il Machia.’ We first discover the future author of The Prince as a schoolboy, masturbating in a woodland because he wants to make a mandrake grow. Machiavelli is an excellent subject for Rushdie, whose recent novels have expressed a concern with the kinds of strong-willed men and women who bring about world-historical change (Ormus Cama in The Ground Beneath Her Feet, for example, or Maximilian Ophuls in Shalimar the Clown). Even il Machia—depicted here as a bitter civil servant with a gargantuan sex-drive—is not immune to the power of Qara Koz (‘Lady Black-Eyes’), the Enchantress of Florence, whose travels from Mughal India to Florence and onward to the New World form the book’s central action. In Machiavelli’s fascination with an eastern princess, Rushdie finds his most powerful image of the nearness of political power to the power of fable.

Mogor dell’Amore’s tale, recounted to Akbar the Great in such choice locations as the imperial harem, becomes towards its end a narrative of exile, and of the ways in which East and West attempt to rewrite each other’s stories for political and private gain. The Emperor Akbar falls in love with the Mughal’s portrait of the Enchantress of Florence, and Qara Koz supplants in his favours the imaginary queen he created when none of his actual wives pleased him sufficiently. The notion of loving an imaginary woman recurs throughout The Enchantress of Florence. It is an image of our desire for, and incomprehension of, the alien; but it is also an image of human sameness, which is what Mogor dell’Amore’s history does its best to insist upon. Like the Mughal’s parti-coloured cloak, The Enchantress of Florence is full of inventions and surprises, produced for our enlightenment as if—yes—by magic.

Kevin Power is the author of two novels, Bad Day in Blackrock (2008) and White City (2021), as well as a book of criticism, The Written World (2022). He is the winner of the 2009 Rooney Prize for Irish Literature. His writing has appeared in The New Yorker, The Guardian, Irish Times, and many other places. He teaches in the School of English, Trinity College Dublin.

The Feather of Truth