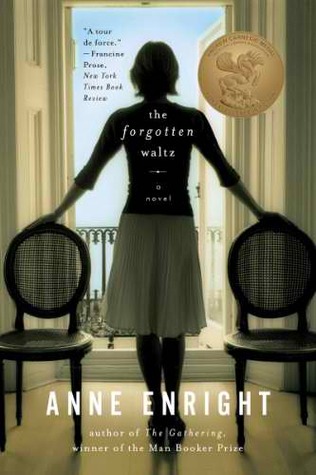 You know Gina Moynihan. She is full of tact and mischief, she keeps perfect score, and you always want her to whisper, close in your ear, what your standing is. If you’re into that sort of thing. To read The Forgotten Waltz is to slip into the ebb and flow of Gina’s consciousness, to watch her shirk the matrimonial quotidian with shuddering lust and frantic laughter, while simultaneously (do not expect a chronology… this all seems to happen at once) finding herself confronted with the Ideal that is caustic enough to erode her indulgence: ‘The fact that a child was involved made everything that much harder to forgive,’ is the opening of the novel. Children are the regulators of lust, and no matter how abhorrent they are to these adulterers, they must be reckoned with.

But why bother wading through the ramblings of a morally ambivalent character whose inconstancy is exceeded only by her vanity? Because of Anne Enright. Or rather, because the author has an uncanny ability to avoid all signs of authorship—at no point does this seem like it is anyone’s story but Gina’s. The observations that Enright channels through Gina are so apt, the prose so consistent, so wry, so merciless, that by the end of the novel you feel as though you’ve gained a close friend, come to hate her, adopted her language and, finally, been rendered empathetic. ‘A man I would cross the street to avoid at nine o’clock—by nine twenty-five I wanted to fuck him until he wept. My legs trembled with it,’ she says of Sean Vallely, the object of her lust.

In public they are work colleagues and social acquaintances. On one occasion, after the start of the affair but before they are found out (don’t worry, as much is said in the first five pages—this novel doesn’t really do suspense), Sean’s wife Aileen invites Gina to a New Year’s Day party. Gina finds herself in the middle of ‘a good snoop’ in the upstairs bathroom, musing:

What words should I write on the mirror, to show up later in the steam of the shower? In what corner might I dribble my spit? The cupboards were flush, the floorboards tight, but there might be a gap or crack somewhere, where a hex of mine might rot, or grow: Sean, where did this thong come from? The one under the bed?

It is not clear whether her mind considers her body a plaything, or vice versa. Nor is it clear if Sean is in love with her. What is clear is that she has agency, and that agency is connected to her nerve endings. During a phone call with Sean, she feels it:

Desire like a kick of blood, that hits low down, then spreads all through me, delicious and alight. It is contained, held by the secret, my skin is the exact shape of it, because I am the secret, I am the money, and this makes me feel like I could do anything.

This business of the money is central. The setting spans 2002 to 2009—the madness that was the property bubble. Sometime in the middle of 2002, on the path to a poorly planned marriage, Gina and Connor buy a house, ‘somewhere to swing our cat, that was not too far out of town.’ And in the quiet of their new home Connor says:

The place was going up by seventy-five euro a day, he said, which was—he did the calculations under flickering eyelids—about five cents a minute […] the toaster would pop out fivers, the wood of the new-laid floors would squeeze out paper money and start to flower.

She describes what followed for the newlyweds as, ‘Mortgage love. Shagging at 5.3 per cent.’ Soon she lights the phosphorous tips of the two marriages, hers and Sean’s, and watches with pleasure as they burn brighter and brighter, until the spectacle is over, and she is on the other side of 2008, reflecting with her sister on the property bubble:

And we listen to it for a moment; the rumour of money withering out of the walls and floors and out of the granite kitchen countertops, turning them back to bricks and rubble and stone.

Gina’s story ought to resonate with the current generation of young professionals in Ireland. As the bubble inflated many felt pressure to buy sooner rather than later. The result was, of course, that so many homeowners found themselves with impossible mortgage payments, living in an unsavoury location, or with an unsavoury character, and with no way out. Money becomes this sort of dark magic, ensnaring so many in the home-equity quicksand, the invisible landscape for Enright’s novel.

Her money-logic seeps into gestures, it bridges the physical and spiritual, it commodifies the most basic qualities we have, qualities that predate currency, but then it reverses that commodification:

Who would have thought love could be so expensive? I should sit down and calculate it out at so much per kiss. The price of this house plus the price of that house, divided by two, plus the price of the house we are in. Thousands. Every time I touch him. Hundreds of thousands […] If we keep going the price will come down—per event, as it were. Twenty years of love can be consummated for tuppence. After a lifetime it is almost free.

It is not a rigid logic. It fluctuates. She often contradicts herself or second guesses her assumptions. But rather than weakening the prose, this uncertainty lends a familiarity to Gina. She is not interested in omniscience.

You wouldn’t say Gina’s narrative is an allegory of the property bubble. Enright is subtler than that, what she achieves is more interesting—it is a narrative lens through which different types of lust (for sex, for property) resemble one another, and at times are indistinguishable. She is the money, she is the market, and while the speculator gets carried away with himself it feels quite good (the one time Sean refers to her as ‘my love’ he says it distractedly while assessing a house for sale). But inevitably these indulgences consume what we might call ‘real’ value, leaving the children nothing, be it a solvent nation or a single home. The end of the novel follows Enright’s nonlinear structure and retells the history of these individuals via Sean’s daughter, Evie, ‘Now, I feel if I can figure out what happened to Evie, I can tell the story properly,’ Gina says at the beginning of the last section. Here, Enright offers an ending that shifts the perspective, imparting a thorough chill to the reader, which resonates well beyond the pages.

Liam Sweeney is a graduate of University of Pittsburgh, and has lately been researching the relationship between the surveillance industry, hacktivism, and the Arab spring for the online publication sampsoniaway.org. He has published a thesis focusing on Flannery O’Connor and Adorno, and has published fiction in Three Rivers Review literary magazine.