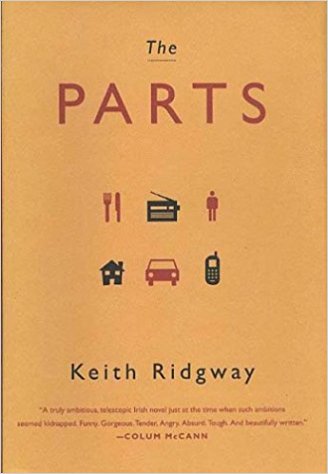 It was a depressing time: reaching the end of the twentieth century, expecting our first child and reading Irish novels. The prospect of being an Irish father was not encouraging. It seemed that most of the literature generated from John Bull’s other island could be summarised as ‘bad Da: sad Ma.’ The countless creative minds forged in the smithy of a good-for-nothing waster of an Irish male progenitor was little consolation as I fretted in the maternity hospital waiting room. Maybe the best thing an Irish father could do for his child was either offer her up for adoption or help her negotiate a reasonable book advance.

44: A Dublin Memoir by Peter Sheridan, Reading in the Dark by Seamus Deane, Angela’s Ashes by Frank McCourt; it was tough going. When would the Celtic Tiger kick in and throw up In My Father’s Footsteps: Making it to the Top by Gavin O’Reilly, or Daddy’s Little Helper by Sean Haughey, or The Miracle of Love by Ian Paisley, Jr.?

It was with not a little anxiety that l approached a new millennium of Irish writing (somewhat haphazardly to boot-living away from Dublin I don’t exactly have my finger on the pulse). Would the Irish father be any better now that he drank wine and went on skiing holidays? What remained of Irish national identity now that we were no longer poor and Catholic? On what common ground would the nation meet without the shepherding hand of Gay Byrne? Would peace, prosperity and longer opening hours make us less interesting, less intense?

The first answers came with Dermot Bolger’s The Valparaiso Voyagee. It proved impossible to get away from the lousy father but perhaps l was hoping for too much; at least a nasty stepmother was a start. It was a very exciting book, portraying an Irish society in the grip of tribunals, development, and immigration. What was intriguing was that the narrative started as a miserable Irish childhood but ended up being a political thriller.

And now comes The Parts by Keith Ridgway. There is still no escaping the underperforming father (Joe Kavanagh) but this is certainly not central to the novel; this is not his daughter’s story (nor is it primarily Joe’s for that matter).

The novel is, among other things, a series of fascinating character portraits. The descriptions and dialogue are funny, beautiful, fast-paced and realistic. It would be a wonderful book even if it were no more than this. This is the portrait of a Dublin landlord, for example:

His voice – McArdle’s voice – was amazing. It was a flat voice. Which meant, in this case, not only that it was droning and low and dead, but also that it was too small, and it was flaky and falling apart and smelly – that smell which hints at a carcass under the floor. Murder and small rooms, these were features of McArdle’s voice. A nostalgia for the tenements and slum violence. He licked his thumb to count the money. Keys took up as much of his trousers as he did. And he was not thin. He was bursting. [… ] His voice was death beds and boiling, rusted locks and cheap paint, chains and plasterboard partitions and second hand cutlery. […] His striped shirt [… ] looked like greaseproof paper spread over turkey.

The time is, I guess, late 1990s or early 2000s (although the warm, balmy summer described made me think of 1995). He’s got the city spot on in its transition years. Joe Kavanagh’s radio career from pirate radio to RTE to independent radio is charted and Ridgway’s light hand pokes fun at many real-life Irish broadcasting careers through independent radio’s various struggles and name changes, its rebranding and time-slot adjustments.

This is changing Dublin; or the new and different Dublins that the characters live in and are helping to create, adding to the existing or replacing the old ones.

Dublin
Plural proper noun.
There’s the Dublin of the rich, of course, and a Dublin of the poor. That’s standard stuff. But there’s more than that. The rich like a multiplicity after all; the poor are wealthy in variation. And then there’s the neither rich nor poor-the getting by, the middle mass, the bulk. Where do they live?
They live in Dublin with the others. A million kittens in a sack, down by the river. […]
How many are there then? Seventeen? Seventy eight?
Two?[… ]
The copper in the cop car waiting by the kerb, dying for a cigarette and missing his wife, he thinks there might be as many as forty. He’s seen some things. Kitty Flood thinks there’s only one, but she’s a complicated woman. Deily Roche doesn’t think about it at all. Dr George Addison-Blake has found sixteen so far, because he knows where to look. Kez thinks there’s thousands.

Kez is a rent boy. His story starts at the fringes of the narrative (his narrative sometimes interrupts the others mid-sentence and is distinguished by a different typeface) but he turns out to be the central character. He is also the lyrical chorus of the novel: the narrator’s voice ( quoted above) seldom intrudes but when it does, it echoes Kez’s voice.

Kitty Flood is a gifted writer unable to write except in internet chat rooms due to, it appears, living the good life supported by Deily Roche’s fortune. Deily Roche is the widow of pharmaceutical entrepreneur, Daniel Gilmore. Her health has deteriorated significantly and she is impatiently waiting for death to end it all. Kitty cares for her along with her adopted son, Dr George Addison-Blake. They live together in a mansion in the Dublin mountains.

Down in the city and its suburbs live Barry, producer, and Joe Kavanagh, broadcaster, both with FMlOl The Real Sound of Dublin. It is not until a thunderclap ending that all the characters are pushed, shoved, or dragged together into one narrative.

All these characters’ stories begin more or less independently and only progressively intertwine. The writing shifts style and includes bare-knuckle realism, dream sequence, comedy and satire-with letters, memos, e-mails and textmessages interspersed throughout the narrative. The novel starts with the sleeping Kitty flying over Dublin and seeing moments in the lives of the other characters. Kitty never gets to meet Kez although she gets close before the end. None of the characters, in fact, get to see the whole story. Neither do we. Even the very end leaves doubts.

Yet the book, even its conclusion, is satisfying. It is entirely appropriate that, containing several narratives of fractured perspective, the conclusion does not attempt to patch things up. The final conversation between Kez and Delly Roche, with both sharing a profound and disturbing experience, is conducted at odds, getting close to a single narrative but not converging.

And here’s the thing: Irish writing in the past has tended to mix brilliant characterisation, comedy and description with a tragic narrative progression. It perhaps was the only possible outcome of such comic excess in the face of Irish reality. The bottom line was that nothing would change. The Irish were doomed to failure, to repeat endlessly and with resignation the same pattern.

Joyce tells us that to remember everything would be a form of madness. He should know – he represents a literature endlessly documenting our past and repeating that past into the future. With the thriller, however, there is very clearly a before and after: something or someone is discovered or uncovered. We learn something, or the characters learn something that they did not know and, with that, everything changes. But at the end of The Parts, there is the implication that a combination of remembering and forgetting allows Delly and Kez to move on and leave the past behind. In a dramatic and suspense-filled conclusion, the narrative moves into thriller mode and in doing so suggests an Ireland that is capable of renewal, of discovery, of happy endings.

The novel contains a narrative thread involving the late Daniel Gilmore and how he developed a drug that makes those who take it forget traumatic events. It is said that the drug was used to make the world forget a Third World War fought in the 1950s that the US won. This seems to be a metaphor about memory as a trap, about liberation from the past and starting afresh. Here (as in The Valparaiso Voyage), a thrilling end allows some of the characters to survive and fight another day, gives some of the bad guys their comeuppance and enables the reader to understand something that was until then concealed.

The characters, like their respective endings, are complex and heterogeneous. Both Kitty and George end up badly; Delly and Joe seem to return to their old lives but with greater understanding; Barry finally establishes contact with the people that surround him. Each is transformed by experiences that have turned their lives upside down and inside out on a roller-coaster Dublin ride that has nothing to do with the paralysis described in Dubliners, for example.

Kez, as he escapes, joins the others in the standard narrative of the text and appears to have forgotten that his ‘real’ name is Kez. Leaving Dublin, he can also leave behind his alter egos and accept ‘Kevin’ as his real identity (we never discover his surname) much as he accepts the fact that – as his fellow passenger comments – here we are, now, and that is good: no more delusions or flights of fancy.

Kevin’s father is absent from both the family and the book. Kevin seems to refind himself and a future by leaving Dublin. These are recognisable elements of an Irish narrative. But something is fundamentally different: Dublin has changed and the private woes of its citizens are personal and do not reflect a society in general. There are people, happy and normal. There is Albert, for example, Joe’s neighbour, a Nigerian doctor working in St. James’s Hospital and, it appears, a good father.

That a writer can so brilliantly and confidently absorbeand move on from the canon and standard tropes of Irish writing while still performing the important role of portraying a changing society to itself and to the literary world is a tribute to the talent of Keith Ridgway. That the thriller should become an important device in the toolbox of Irish writers suggests that Irish reality, though already well known and documented, is still capable of surprise and is no longer limited by its past.

Padraic Bohan lives in Barcelona. His article 'The National Poet and Joyce' will be published this year as part of the collection Back to the Present-Forward to the Past: Irish Writing 1798-1998. He published the So this is Dyoublong? map to Joyce's Dublin in 1997.

All Summer (an extract)