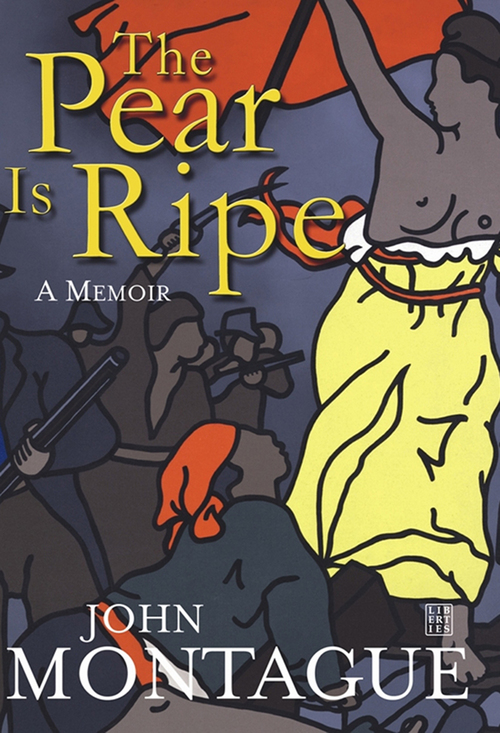 The Pear is Ripe

This sequel to Professor Montague’s Company: A Chosen Life, moves between Berkeley, Paris and Dublin, and is as much a survey of changing sexual mores as sixties memoir. It opens in a Berkeley redolent of acid, revolution and the new promiscuity. Under the influence of poet Gary Snyder, zen fan and advocate of the orgy, Montague loses some of the grey Northern Catholicism of his youth. An admirer, the delightfully named Rose Twirlaleaf woos him with wildflowers as a prelude to the surprising suggestion that he relieve her of her virginity. This excites in him ‘not lust, but a kind of rueful pity.’

At a party with colleague Tom Parkinson and other literati, however, Snyder goes too far, passing around the first Playboy magazine to show the female pubis. Monatague snaps into action rebuking his ‘pals for their adolescent gawking.’ (A scene oddly reminiscent of the story in a Catholic Truth Society pamphlet about boy saint Dominic Savio confiscating an indecent publication from some giggling schoolfellows with a warning of hellfire.) But to return to the professor’s anecdote: ‘It might have been, as they chortled, an advance in sexual freedom, but certainly not for women. Joanne seemed surprised, but relieved. “No one has spoken to them like that in years,” she declared approvingly.’ Attaboy, Professor!

Idyllic as Berkeley was with its wine and pot parties and swinging chicks, Montague decided to call it a day explaining to his Head of Department: ‘It’s as if I had a glimpse of the Garden of Eden, and while I have revelled in it my old fashioned Catholic training tells me that where you have Eden there is bound to a serpent, coiled somewhere among the eucalyptus trees.’

In Paris, reunited with his wife Madeleine, he encounters such luminaries as the sprightly septuagenarian Sylvia Beach, and later Allen Ginsberg, Peter Orlovsky and entourage, engaging in Rimbaud’s systematic déreglement de tous les sens. ‘But I did not feel like joining them; while I was at ease with my homosexual friends, of course I was not of them.’ Nor could the cadaverous William Burroughs tempt him with a needle and spoon.

He was much more taken by the young partner of the English surrealist painter Bill Hayter: ‘I liked Desiree not only for her vitality, but because it struck me that she was the latest in a long line of high spirited Irish girls who had set out to conquer France. La Belle O’Morphee is celebrated in Francois Bouçher’s rosy erotic paintings; Johanna Heffernan, with her abundant auburn hair, was Gustave Courbet’s mistress and muse; Harriet Smithson haunted Berlioz. And now there was Desiree Moorehead, from a Dublin family, cutting a swathe through Paris.’ I shouldn’t have thought that three examples make a particularly long list but then literature, not mathematics, is the professor’s discipline.

Back in Dublin, lecturing at UCD, he encounters and movingly describes the long martyrdom and shameful neglect of Patrick Kavanagh. ‘His achievement was almost all against the grain, a path scythed through the thistles of indifference.’ There is a fine set piece about how the author delicately negotiates the mine-strewn self-imposed task of bringing out Kavanagh’s Collected Poems, and a touching picture of his delight at the launch. Later Montague hires a hall for that other doomed genius John Berryman to celebrate the completion of the Dream Songs. Berryman, whose Herculean drinking made Kavanagh look like Matt Talbot, thanked Liam Miller (of Dolmen Press) before commencing to read, occasioning Kavanagh’s volcanic departure. John Jordan however, almost as drunk as Berryman, approved, interjecting cries of admiration causing Ronnie Drew to rasp ‘Shut up John’ at intervals. The evening proved to be, as Montague elegantly puts it, ‘a nerve-racking success.’

On the American poetry circuit the professor is once again surprised by joy, waking in a faculty guesthouse to find that he has been joined by a slender young girl: ‘I have come to comfort you,’ she says. ‘You said that you were of Ulster Catholic background, and your pope has just died.’ Her name is Aurora: ‘Because I appeared with the dawn.’ Of the wistful charm of such encounters he writes: ‘At best, they were utterly self contained and even tender, neither cynical nor salacious.’ Fun too, one hopes.

Back in Ireland the drink-ravaged genius, composer Seán Ó Riada needs a dig out and the author persuades Garech Browne, his fellow founder of Claddagh Records, to finance an album. Feeling let down by the national orchestra, Ó Riada requests and gets the hundred-strong London Symphony to record Nomos No. One. The account of his death is perhaps the most moving thing in the book.

But no. It is not. That is kept for the coda, the writer’s last meeting with the dying Beckett. He visits the clinic in Paris. They drink whiskey.

‘And now that it’s nearly over Sam can I ask you was there much of the journey you found worthwhile?’
‘Precious little.’

And Beckett sings from a Protestant hymn:

Now the day is over
Night is drawing nigh
Shadows of the evening
Steal across the sky.

That furrowed brow above staring seagull’s eyes; the limber spare body, now slowed by time: I will never see it, or him, again.

There were giants on the earth in those days. Let us give thanks for what Montague has preserved of them here

The View from Under the Table