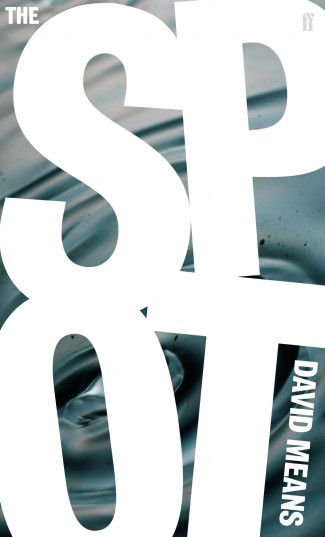 As in ‘This is the spot right here,’ or ‘On this very spot, in such and such a year.’ For David Means, the spot could be a point off the Cleveland shore where water is drawn for the city’s supply, or a patch of land where a teenager is crucified. It could also be some point in future time where, with enough pressure applied, you become desperate, or die. But, in general, the spot is where the most primal human needs, fears and atrocities spring to the surface, and Means conveys stories of this spot at the fringes of human experience.

In collections like A Quick Kiss of Redemption, Assorted Fire Events, The Secret Goldfish, and now The Spot, Means tells modern American folktales, his forensic awareness of character and scene working in tandem with the mythic nature of the stories. Precisely portrayed characters see their world in lucid detail—‘the pebbles in the driveway a buttermilk colour, the old shingles smeared with moss, the clapboards lifting away from their nails, the yard wide and grand all the way down to the water’s edge’—and, like the best yarn-spinners, Means’ narrators are almost entirely unreliable. The vernacular is at once contemporary and mythic. ‘The Botch’ is about a bank robbery gone wrong, with the phrase ‘The idea is…’ recurring throughout, so that the reader never forgets that they are hearing a folktale, at a bar counter, perhaps, under dim light.

Indeed, this collection is populated almost exclusively by characters who tell stories as they gather on beaches, in car parks, around campfires. The stories jump back and forth, often needing to be pieced together like so many overheard fragments. If The Spot is postmodern in its use of time, however, it is not scattered as such, but deliberately fractured, and, because of its oral nature, more organic than conventional beginning-middle-end stuff. In ‘The Gulch,’ the crucifixion of a teenager is recalled through memory, rumour and testimony. The detective in charge of the investigation will return years later, to use the story as one ‘he pulled out of his hat when the conversations were boring, playing gin rummy or bridge.’ In ‘The Junction,’ the pieced-together story of one tramp is literally a way to satiate hunger, as he spins his particular yarn at a family table. In ‘The Blade,’ stories of car crashes lead to stories of knife fights: ‘Two cars, each doing about a hundred on a two-lane outside Tulsa, struck each other head-on, mashing up into a one-foot-by-one-foot block of metal, out of which there crawled an unscratched child. That led to an argument about the likelihood… of such an event, which in turn led to a story about a guy who had been decapitated in a farm accident…’ The anchor story, one of harrowing loss, is never fully revealed by the most enigmatic of the gathered tramps.

In our time, as before, folktales or myths can be set out in terms of violence, love, hardship, obsession. The narrator of ‘The Knocking’ fixates on the rhythmic disturbance coming from an upstairs apartment. Real or not, the knocking is, to the narrator, lucid, constant and deliberate. A disgraceful affront to neighbourly etiquette, the act migrates across the ceiling and as it does becomes the code by which we understand this narrator’s failings, and his desire for mundane order over the chaos of his truths. Across six pages, the knocking shifts from physical act to soul-deep vibration; like a word repeated too many times, it becomes obsolete and then profound, affirming the struggle of being human. In ‘A River in Egypt,’ the perceived affront is not a human act but an as-yet-undetermined illness. A father stands in a sweat chamber with his son while the boy is tested for cystic fibrosis. At different points in this superb, emotionally charged story the boy’s scream and the father’s weeping seem like they will tear open the entire universe.

Conjoined by symbolic and violent imagery, the stories of The Spot are elemental, religious, prophetic. Men are consumed by fire; hanging laundry is juxtaposed with crucifixion; there are crosses, knives, guns, boats and bodies. Nature is often corrupted: the fields are dead fields. The most constant image, however, is that of the river. Whatever human adventure unravels on a certain spot at a certain point in time, Means’ river flows past it, reflecting with a cold eye the psyche’s dark horses, a mark of the void into which desolate people find themselves peering. Linking the disparate histories and memories of all these stories, this mythic river of oblivion (Lethe perhaps) is the spot where frantic visions of love and violence dip their toes in eternal mystery. Nowhere is this more evident than in ‘The Spot,’ at the end of which a boatman (or in mythic lingo, ferryman) considers the floating body of a drowned girl: ‘Maybe she simply couldn’t live up to the expectations that life had, and decided that this was the way to go, majestic and grand, united with the great drive of water that had been coming over this escarpment for a million years.’

All of this culminates in two ideas as to why David Means is such a compelling and resonant writer. Firstly, the stories reveal our tendency towards violence. Much like David Lynch’s Blue Velvet, a grim vision often lies beneath the mundane knockings and hospital appointments, the trips to the bank or shopping mall. Some dark, innate urge for death and violence leads characters to the spot where these things go awry. As with Peter Pan and his lost boys, death is the great adventure here, giving meaning to the lives of the hobos, drug users, seminarians, artistic directors, parents and children alike. The guns and shouting of ‘The Botch,’ for example, become ‘strangely meaningful’ to its protagonist. Cornered by the circumstances of their lives—whether desperate or simply monotonous—Means’ characters have in them an animal force, with screams that frighten gulls and teeth bared in ‘a profound latent rage.’ As he approaches a prostitute in a hotel room, the seed farmer of ‘The Spot’ becomes ‘beneath his facade of neat and upstanding morals a horrible goat-like presence.’

But the second assertion of Means’ style and vision draws these animal-people back from the brink. If violence lies, as one narrator here claims, ‘in the crux of the act,’ then the need to bear witness bursts from the man who acts. The need to mark the spot is at the heart of this book, is what redeems its bleak and touching humanity. Men gather to tell their tales around wasteland campfires, or gesticulate as they drive. These people chronicle their adventures with the same fervour as the first man who realised that he had somehow been created, and searched for grace in ‘the persistence of the deeper mysteries.’

Like all the best tales, the stories gathered in The Spot are bound to seep into the canonical consciousness, and indeed the personal history of each reader. It is easy (and correct) to compare Means favourably with his literary peers and forefathers, but something more fundamental is taking place here: reading David Means we are hearing the story of Job as he rails against an aloof God; we are looking too at the earliest cave paintings, or a carving in an old tree trunk that says ‘I WOZ ‘ERE,’ or ‘FUCK YOU.’ We are witnessing a natural, brilliant storyteller as he penetrates his own land with his own set of folktales.

Danny Denton is a writer from Cork, Ireland. His first novel, The Earlie King & The Kid In Yellow will be published by Granta Books in January 2018.