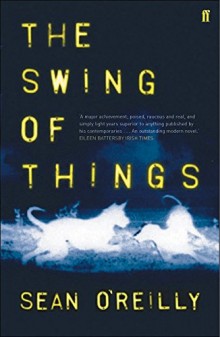 The Swing of Things

IN 1 920s WEIMAR GERMANY, a group of angry young men began to depict the hedonistic post-war society in a nightmarish style they called Neue Sachlichkeit (New Objectivity). Their paintings are peopled by grotesques, by fat priests and corrupt tycoons, lascivious demimondaines and leering, near-naked prostitutes in close proximity to war cripples and other human debris forced to beg for coppers. Sex is little more than a commodity, bestial, perverse and violent. If artists such as George Grosz and Otto Dix have frequently been labelled misogynists, there can be no doubting the power that their disturbing vision of the infernal city, riven apart by ostentatious inequality, continues to exert.

One doesn’t often encounter a vision of Dublin as such a hellish locale, so little wonder that Sean O’Reilly’s second novel, The Swing of Things, has been raising quite a few eyebrows recently. Its protagonist, the ex-republican Noel Boyle, may be a psychological rather than a physical war cripple, but his ineluctable paranoia, together with that of the frenetic street entertainer, Fada, leaves us no point of entry into the city which is not distorted by their respective neuroses. Hence the idea that Boyle cribs from Sartre for a philosophy essay, that perception can never be neutral but is already imbued with the values of the perceiver. To that extent, the perceived city of Dublin is comparable to the Christiana ( Oslo) depicted by the hysteria-prone narrator dreamt up in 1890 by the Norwegian Nobel Laureate, Knut Hamsun, in his remarkably contemporary outsider novel, Hunger. Whether O’Reilly manages to pull off his vision with equal success is, however, open to debate.

O’Reilly’s novel begins very memorably, in a narrative style that is vitiated by uncertainty: ‘Call him Boyle,’ and a little later ‘Say this is Dublin.’ One is bound to recall the opening of that epic of paranoid obsession, Moby Dick: ‘Call me Ishmael. Some years ago – never mind how long precisely –’ and the reader is equally disorientated by the ploy. In an early exchange, when Fada notes that Boyle has given a false name to the Gardaí, the laconic reply is ‘maybe the name I gave you was false.’ Indeed, throughout O’Reilly’s novel, hesitancy continues to differentiate the third-person narrative dealing specifically with Boyle: ‘they both ran, no, skipped back to the van’ or again ‘[he] was shocked, no, dismayed that Boyle couldn’t help.’ The accumulative effect of these syntactical interruptions is to reinforce the deep sense of doubt that attaches to Boyle’s identity, and we are never afforded more than fragmentary glimpses of the paramilitary nightmare of history from which he is trying to awake. In one remarkable sequence, we see him running successively through a series of vignettes from early childhood and on through the Troubles until his run ends abruptly in a charity shop in Phibsboro. There are also occasional, superbly realised filmic details, such as ‘the puddle trembling between her flip-flops a second before the explosion.’

Very early on in the novel, a structural parallel is established between this refugee from his own Derry past, and Fada, the hyperactive, sewer-minded Dublin ‘chanter’. Boyle is inexplicably obsessed by the illicitly made death-mask of a Russian suicide who has drowned herself in the Liffey, while Fada is haunted by an old woman in a tweed coat whose late husband’s poems he has inadvertently misplaced. The parallels are reinforced by occasional details of memory: the smearing of excreta on walls in the mental home where Fada has been institutionalised is bound to recall the dirty protest in Long Kesh (Fada is, of course, the Irish for ‘long’). However, whatever sympathy attaches to Noel Boyle throughout, Fada’s obsessive and monotonous degradation of all matters sexual quickly exhausts the reader’s patience, and indeed interest, and a belated attempt by the author to foster pity by having him whisper ‘help me’ does little to convince. More of this later.

If by day the two are variously seen wandering the labyrinth of a Celtic Tiger cafe society peopled by exchange-students, tourists, and buskers, by night they inhabit an expressionist Dublin streetscape that resembles nothing quite so much as the ‘Nighttown’ of the ‘Circe’ episode in Joyce’s Ulysses. Fada indeed alludes to Joyce, hinting at Leopold Bloom’s voyeuristic climax on Sandymount Strand, and is even permitted to recite the following lines verbatim from Joyce’s satire ‘The Holy Office’: ‘That they may dream their dreamy dreams/I carry off their filthy streams. ‘ There is little of the warmth, titillation, creative energy and scatological humour of Joyce in The Swing of Things, however. The tone throughout is more akin to the jaundiced view of society that prevails in Ferdinand Celine’s controversial debut novel, Voyage au bout de la nuit. Occasionally, O’Reilly demonstrates an enviable ability to capture with immense economy a haunting detail, such as an empty lap-dancing club with its ‘sorrows of the vacant stage, the rolling lashes of the disco light, the naked punishment pole’ or the homeless teenager, Martin, whom Boyle watches ‘pull the sleeping bag down over his hat and head, down as far as his waist, and wander away into the night like a half-hatched insect.’ More often, a dull anger prevails which seems directed at a series of predictable targets: camera-wielding tourists, the upwardly mobile sons of suburban dwellers, and Trinity students who are invariably ‘well-fed’ or ‘well-brought-up’.

Satire by its nature tends towards generalisation and caricature, though one has to say that the reader is equally impelled to resist the idea that only the ‘authentic’ are poorly fed, are dysfunctionally raised, experience problems of social adjustment and are generally incapable of getting into ‘the swing of things.’ What is far more objectionable in the novel, however, is the reduction of all significant females to a patronising binary of temptress/redemptress. After a hundred and fifty odd pages in which sexual games are seldom more than aggressive exchanges of sneers, leers, taunts and saliva, occasionally consummated by even more degenerate exchanges of bodily excreta, the appearance of the reticent Eleanor, enigmatic as a Ballygowan maiden, strikes a particularly leaden note.

This is a great pity, because O’Reilly is a writer of considerable power and subtlety. The denouement, which Noel Boyle ineluctably brings on himself despite every attempt to escape his troubled past, is a striking exercise in menace and restraint. The international callcentre in which Boyle finds nighttime employment is, to my knowledge, an entirely new space in Irish fiction, and is one, moreover, which allows the author to locate Boyle with great economy in the dark heart of a sub-culture of refugees, loners and asylum seekers. Boyle is also introduced, through his Russian acquaintance Victor ( who may be another psychological war cripple), to a clandestine network of semi-legals, and the atmosphere of mutual suspicion that enervates this disparate group prepares us for the sinister coven of republican godfathers from whose web Boyle is destined never to fly.

If one was to single out the most fatal, and indeed obvious flaw that undermines the book’s power, it is that the systematically repulsive figure of Fada is, to be honest about it, immensely tedious. It is also quite impossible to believe that an unwashed, unfunny, skinny, foulmouthed, yellow-eyed, sneering, increasingly frantic sponger, who persists in pouring obscenities into the ears of every girl he leers at, will either enjoy an uninterrupted string of sexual conquests or retain a circle of male acquaintances whose girlfriends he invariably insults. That Boyle is unable to escape him fast becomes a matter of impatience. O’Reilly, perhaps aware of the extent to which the Fada episodes are trying, plays the victim card, and elaborates a series of increasingly humiliating and violent attacks on the unlovely chanter. As a strategy it fails, since the reader is only too aware that the author is belatedly trying to manipulate his/her sympathies.

Occasional demonic scenes, such as that which sees Fada dancing on the roof of a car, and his initial paranoid obsession with an old woman, suggest that he could have been a far more powerful presence if more subtly handled by the author. In the end, he detracts from a novel which is otherwise a powerful and disturbing exploration of the dark underbelly of the New Ireland.

David Butler’s third published novel, 'City of Dis' (New Island), was shortlisted for the Kerry Group Irish Novel of the Year, 2015. His second poetry collection, All the Barbaric Glass, is due out in March 2017 from Doire Press.

The Weirdness of Dead lnfantas