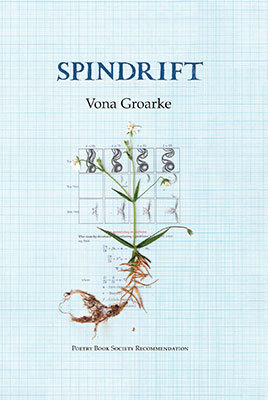 The Thing Is / Spindrift

SOMETIME IN THE LAST COUPLE OF YEARS, I heard Louis de Paor read, and between poems he seemed to make the wild and irresistible claim that every modern Irish poet has written at least one poem about picking blackberries. Picking blackberries is a big deal, he suggested, because it is the moment when even the most suburban of us gets rural (even if, as for me, it’s only down the back of a seminary in Balally), and it’s the moment when even the most West Brit of us gets handed on some bona fide oral lore by an elder: pick the ones furthest from the road, and, if you don’t want to find out what’s worse than a grub in your blackberry, check that the nubbin’s green, not brown. (The elders didn’t tend to use the word ‘nubbin’ of course, but my elders at least hadn’t held on to any exotically Irish word for what is technically called the receptacle; indeed I think they just pointed—though my Dad, from Mallow, did make great hay of having us call the punnet a ponny.) The ur-text might be Heaney’s sexy ‘summer’s blood was in it’, but Peter Sirr gets his oar in with two lines in his latest collection that are their own section in the poem ‘The Different Rains Come Down’:

September breakfast:
a mouthful of blackberries in the lane.

It’s everything that irritates me in contemporary Irish lyric: romanticism about the natural world, brevity masquerading as profundity. If it’s not blackberries, it’s curlews and corncrakes, and sure enough, curlews and corncrakes make an appearance in the same poem. The poem itself is smartly self-conscious—at one point, the poet-speaker leaves his woodland hut to make coffee in a friend’s house; the friend, an office worker in the city, ‘has crept into my hut to drink from my mug / and train my binoculars on the gap between the trees / into his own distant life’—but still.

Maybe poets shouldn’t be allowed to breed. Sirr’s long poem of fatherhood, ‘The Overgrown Path,’ is tender and moving—I thrilled at recognising the child walking ‘the coronation crayon walk / a concentration within a concentration / miraculous…’, a crayon in each fist—but isn’t what’s left of the tradition, after bogs, blackberries, curlews and corncrakes, half-full of poems telling the miracle of sprogs? I couldn’t help reading the poem’s fourth section, ‘Lunar,’ aloud, in a bad imitation of Greg Delanty’s inimitable Cork screech, because ‘Dear pea-head’ can’t help being an impression of Delanty’s ‘little bighead’, and those crayons are just a tad too much Séamus Ó Néill’s ‘Subh Milis’.

A highlight of ‘The Overgrown Path’ is its third section, ‘PPS,’ in which a child is addressed as 3755547K: ‘your small head rests / in the arms of the state.’ The lines are made at once startling and sinister by an earlier poem in the collection, the strange, fantastic ‘Shhh’:

you’ve passed your five-yearly vetting review; your grandparents
haven’t let you down, your teenage son, your childhood friend

haven’t spilled the beans, no one has marched from the grave
to rattle his bones and bloody the carpet, and you are whole again

a re-trusted member of the counter-intelligence community,
your swipe card unlocks the canteen again, knowledge swamps the room

The couplets hint at a withheld rhyming scheme; the language is plain and beautiful: this is a measured strangeness.

Elsewhere, likewise, the moments of most beauty in The Thing Is are its most impersonal. ‘In the Beginning’ is astonishing: the whole history and confidence trick of a city in two dozen lines. ‘Thanksgiving Hymn,’ after Brecht, reminds us of how impersonal the universe feels about us and our offspring, and takes comfort in the fact:

From the bottom of your heart praise heaven’s
terrible memory; it has long forgotten
your name, your face.
No one knows you exist.

Praise the cold, the darkness, the decay.
Have a good look;
nothing depends on you;
relax, you can die with an easy conscience.

For a book so concerned with domesticity, The Thing Is ends crazily—with a coda after Catullus. It’s a jarring change of tone—’fuckers / queuing the length of the alley / to give it to her where she lies / sprawled at leisure’—but to be jarred at this moment seems spot on. A collection that stuttered to an opening moves through revelling to a reckoning we can all, post-boom, recognise: ‘What now / the song is over?’ Its answer? ‘Make it again’:

coming to
in the swaying tram
still at it, still here
thicktongued with want
and rubbing your finger
on the misted window to see
the brutal, lovely
persistence of the city.

Peter Sirr is one of our best poets, in this country, and his collections always contain miracles, even for those of us fed up of doting daddies.

I’m not a complete cynic. A single line in Vona Groarke’s Spindrift—’let the worst I ever do to you be die’—made me choke up like the opening sequence of Pixar’s Up! Groarke bestows contemporaneity on the love poem in ways that make of Spindrift a suitable bed mate for Carol Ann Duffy’s Rapture. Both are fascinated by the modern devices that become love’s trappings and tools. For Duffy, the mobile phone becomes an ‘injured bird’ or a gun; Groarke sends words ‘ahead / like a text to alight on a new lover’s mobile’ or makes of the centre of a love affair ‘a clearing where the response lands, disclosing / in its silver ringtone, one silver disclosure’ (‘Texts’). In Groarke’s ‘Love Songs,’ the ‘flare’ of a mobile phone is ‘an outcrop of sunlight / in which we sit.’ In ‘Away,’ Bebo, Skype and Google Earth each make an earned appearance.

If Sirr is valuable partly as one of the few poets who writes for us from within Ireland (so many others having flown the coop), Groarke, who lives in England, is relevant in part through the ease with which she moves between various homes, evoking both the rootlessness of contemporary lives and the place-attachment we retain. Her telling of place is at once fond and careless: a storm tosses ‘its tinsmith verbs / somewhat to the west’ (‘Some Weather’); a porch across a lake ‘answers, very nicely, to our own’ (‘The Jetty’). There are moments the speaker could be here or there: ‘Yesterday / I answered in a class of Irish / at the checkout of Walgreen’s’ (‘Away’). Appropriately, there are two poems titled ‘Away,’ as if away could be just as easily one place as another. Spindrift means the spray blown from the crests of waves by the wind, but it also means driving snow, and this is a collection that worries repeatedly at what may be whited out—missed or forgotten—through absence, but takes a kind of pleasure in the worry.

These then, are two poets that work hard at being relevant to our real lives, and repeatedly, if not always, succeed. David Wheatley, in a blog entry on Spindrift, has lauded Groarke for being ‘one of the small few making any kind of a difference in poetry from Ireland these days.’ The verdict contains a claim as wild and irresistible as Louis de Paor’s: that poetry, when different, can make a difference. Does poetry make things happen? Is it, itself, the difference? Or is it merely a worthwhile wilderness? I’ll make a leap of faith and submit: if there’s a difference around here to be made, Groarke and Sirr are hard at making it.

A Little Before Seven