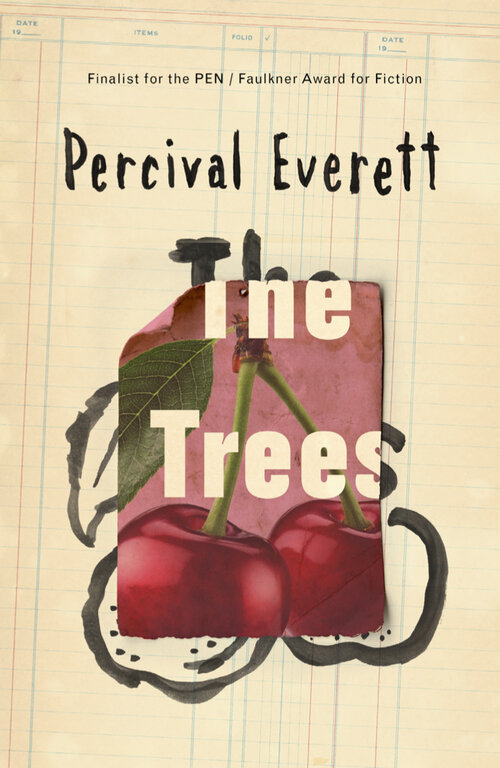 In an oeuvre of funny and, at times, caustically angry books, The Trees might be Percival Everett’s funniest and angriest yet. At 65, Everett is one of the most prolific voices in contemporary American literature. Over the past four decades, he has published twenty-two novels, four story collections, and seven works of poetry. Amongst these are westerns (God’s Country, Half an Inch of Water), detective novels and murder mysteries (The Water Cure, Assumption, Telephone), as well as several playful and formally-daring novels (Glyph, I Am Not Sidney Poitier, Percival Everett by Virgil Russell).

His last novel, the Pulitzer-nominated Telephone (2020), was released in the US with three alternate endings published in three marginally distinct editions—with each cover featuring a compass pointing in a different direction. A year earlier, Everett published a work of prose-poetry, The Book of Training by Colonel Hap Thompson of Roanoke, VA, 1843: Annotated From the Library of John C. Calhoun. Resembling an archaic guidebook, it’s a guide on how to ‘break’ African-American slaves. After I picked up a second-hand copy, I noticed some pages featured racist marginalia. I wondered if some previous owner had missed Everett’s intention. The dissonance between what I knew to be Everett’s ironic writing of a slave-training manual alongside earnestly racist marginalia was jarring. Then it hit me: the word annotated was in the title; the annotations were built into the book.

The Book Of Training, like Telephone, are notable examples of Everett’s playfulness. By undermining the authority of the text through metafictional gambits like alternate endings and marginalia, Everett is reminding us that, ultimately, if there is any meaning to be found, it’s to be found in the act of interpretation. Throughout his writing there’s a distinctive capacity to resist and confound categorisation. Even his characters struggle to escape or subvert the idea of categorisation, of prescribed identities—namely the identities so regularly projected by white Americans onto black Americans. Most of Everett’s protagonists are black, a detail that will usually be revealed after they encounter a white character. In Assumption (2009), the reader discovers the protagonist’s race only when they reflect on what he suspects may have been a microaggression.

This idea of categorisation appears midway through Everett’s latest novel, The Trees. Damon Thruff is an academic who works at the University of Chicago and holds PhDs in molecular biology (Harvard), psychobiology (Yale), and Eastern philosophy (Columbia). And yet, because he’s black and the author of a book on the origins of racial violence, he’s been relegated to the Department of Ethnic Studies “because they didn’t know where to put him”. Like Thruff, Everett has had the misfortune of being pigeon-holed by his race. Although his popularity has increased, particularly in the last few years, one can’t help but thinking that Everett may have been neglected for decades because critics and readers alike weren’t sure how to approach a black American writer who not only eludes easy comparison and regularly upends literary conventions and genres, but also confronts and negates some of America’s most uncomfortable and widely-held assumptions about race.

Many of these ideas are taken to their logical conclusion in Erasure (2001), his most well-known work, and arguably his masterpiece. It revolves around Theolonius ‘Monk’ Ellison, a writer struggling with his agent’s claim that his writing isn’t “black enough”. Irritated by the idea that skin colour correlates with subject matter, he pens a Blaxploitation novel—My Pafology, later renamed Fuck—so dense with racial stereotypes as to be self-evidently satire. Intended to expose the publishing industry’s bias for serving audiences what it thinks they want, Fuck is an immense success. An Oprah-like figure appears in Erasure raving that Fuck captures the “authenticity” of urban, Black America. Erasure is a middle finger to the publishing industry’s kowtowing to trends and its relentless insistence on segregating African-American literature from American literature.

The Trees stems from one of the most harrowing events in American history—the lynching of Emmet Till in 1955. Till was fourteen years-old when he came to Money, Mississippi to visit his uncle. When a white woman named Carolyn Bryant claimed Till had flirted with her, her husband Roy Bryant, and brother-in-law, J.W. Milam, tortured and shot Till before dumping his mutilated body into the Tallahatchie River. Against the authorities’ wishes, Till’s mother, Mamie Till, insisted on an open-casket funeral so that everyone could “see what I’ve seen”. An estimated 250,000 people showed up to the viewings, and the now-infamous photographs of Till’s body were seen by millions more. A few months later, in Montgomery, Alabama, Rosa Parks was asked by a bus driver to give up her front seat and sit in the ‘colored’ section at the back of the bus. She refused, later explaining: “I thought of Emmet Till… and I just couldn’t go back.” Mamie Till’s belief that America needed to “bear witness” to the horrors of racism helped galvanize the nascent Civil Rights Movement. Bryant and Milam were acquitted by an all-white jury and, fifty years later, Carolyn admitted that Till hadn’t flirted with her at all.

Set in present day Money, The Trees opens with Granny C (a stand-in for Carolyn Bryant), sitting in her backyard, reflecting on Biblical karma and on “the lie I told all them years back”. Shortly afterwards, Daisy—married to Granny C’s nephew, Junior Junior Milam—arrives home to find her husband’s mutilated body in the bathroom. Beside him rests the body of an unknown, mutilated black man in a blue suit. The black corpse is clutching what appear to be Milam’s testicles. Dispatched to the scene are two local deputies: white and cartoonishly inept. To make matters worse, the unknown corpse goes missing and shows up some time later next to the identically mutilated and castrated body of Wheat Bryant, Granny C’s son. And so it continues: more murders of white people, each one with a black body beside it. Something supernatural is at work and the white townspeople are on edge.

Most of Everett’s novels feature first- or close-third narrators, many of whom are subdued specialists of some kind (professors, geologists, hydrologists, etc). A muted rage lingers not far below the surface of many of these characters, but it’s rarely betrayed by the lean, unadorned prose. The Trees is written in that same style, but the rage here is magnified, not muted. It also, once more, defies categorisation: it is literary fiction that’s part detective novel, supernatural-thriller, and savage cultural-comedy. Short, punchy chapters constantly shift the novel’s focus between Everett’s unusually expansive cast. Despite the heavy subject matter, Everett mines it for all its humour. Racially-loaded gags appear on almost every page, at everyone’s expense. When local police are mystified by the murders, Ed Morgan and Jim Davis, two black detectives from the MBI (Mississippi Bureau of Investigations) are sent, and the head of local police is incredulous that they want to investigate alone in rural Mississippi:

“You know this here is Money, Mississippi?”

“What are you saying, Sheriff?” Ed asked.

“This ain’t the city. Hell, this ain’t even the twenty-first century. It’s barely the twentieth, if you know what I mean.”

Everett’s keen eye for ironies is often at its sharpest pathologising American racism. With apparently unprovoked murders of white people appearing throughout Money, The Trees inverts America’s history of lynching in order to pose the question: what if it were white people and not black people who were being indiscriminately murdered—would America respond any differently? Wan and wilting white guilt aside, are white Americans actually willing to grant black lives the same humanity they afford white lives? The Trees is not naive, or hopeful, even, about America righting its wrongs. Instead, the novel is part literary retribution, part call-to-arms—an acerbically funny thought experiment and unapologetic revenge fantasy.

As The Trees makes clear, lynching wasn’t just limited to black Americans. There were many different minorities lynched, and Everett reminds us that Asian-Americans suffered badly. One of the largest lynchings ever recorded in the US was the 1871 Los Angeles massacre, when nineteen Chinese immigrants were murdered in a single day. White people, too, were also lynched (by, you guessed it, white people)—often for being involved in abolitionist or anti-lynching movements, and sometimes just as punishment for committing crimes. Lynching, clearly, is a white problem. But there is a reason that almost all of the characters in the novel who have anything meaningful to say about lynching are black. (One of the novel’s only sensible white characters turns out, much to his wife’s horror, to be part-black). The Trees shows us that, more than anyone else, it’s been black people who have had to live with the legacies of lynching.

One of the novel’s more intriguing characters, Mama Z, is a local mystic who maintains an archive of everyone lynched in America since 1913—the year her father was lynched. When Ed and Jim show up to her home to ask if she knows what’s going on, Mama Z—coming from the time and place she does—is understandably skeptical of the detectives’ intentions. Shortly thereafter, Thruff arrives in Money to lend his expertise to the investigation and he is astounded by Mama Z’s archive and her dedication to preserving the memory of those lynched. He takes it upon himself to write out the names of the dead. “When I write the names they become real, not just statistics… It’s almost like they get a few more seconds here.” The most affecting chapter of The Trees is ten pages of the names of lynching victims. By giving us the names, Everett forces the reader to confront—or “bear witness”, to echo Mamie Till’s phrase—the horror at the heart of the book. Scattered throughout the names are several “unidentified black males”, who were also robbed of their identities. When Mama Z asks Thruff why he’s writing the names of all the lynching victims in pencil, he says that he wants to be able to rub the names out afterwards in order to set them free.

As more and more white people are murdered around America, witnesses claim to see black people at the scenes of the crimes. No one knows what’s driving these “racial killings”, but whites talk of forming militias and America seems on the brink of war. Everett is uninterested in representing white Americans here as anything other than repulsive, Klan-cheering yahoos. He describes someone as smelling of “shit, Aqua Velva, and pimento cheese.” Of Obama, one white character remarks: “Well, the country’s done with that experiment. Smart-ass uppity sumbitch.” Trump even appears twice. First, cowering beneath the Resolute Desk after a staffer is murdered, and then, dropping a slur and lying about it in an attempt to drum up hatred against black people in a wonderfully rendered address to the nation:

I wish I could find the leader of the Negroes. I would punch him in the face. You know I would. Such a punch I would give him, and not a sucker punch because he would see it coming. Pow. I know how to handle these people. Thugs.

And yet it would be a mistake to read The Trees as just an attack on Southern whites. When white bodies begin piling up far from the South, Everett reminds us that lynching’s legacy lies not with the South, but with America as a whole.

There’s a moment, midway through the novel, when Mama Z first meets Thruff. She’s read his book on racial violence and is displeased by its dispassionate restraint. She tells him: “Your book is very interesting because you were able to construct three hundred and seven pages on such a topic without an ounce of outrage.” The Trees comes in at around a similar length. Thruff may not have been able to write a book about the horrors of lynching with such anger and intensity, or in such a bitterly funny and gravely moving way but—thankfully for us—Everett has.