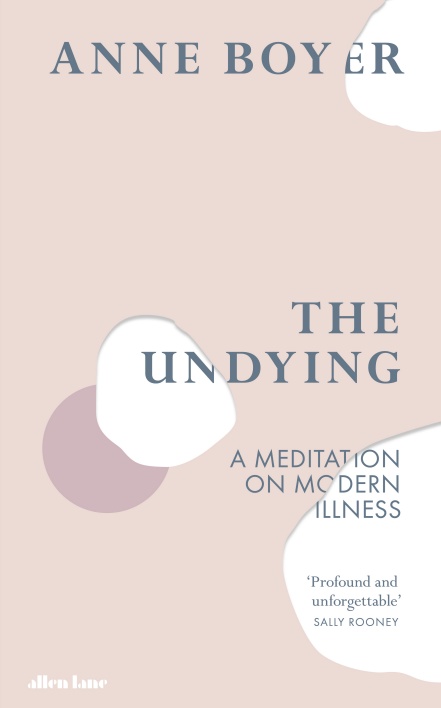 Before any writer begins a project, there is always the interstitial moment between what that the writer thinks they will write about and what actually manifests on the page. They can choose their subject, or their subject can tap on their shoulder, a Morse code suggestion of words. Write about this. There may be resistance, or unease with this sense of summoning. Some topics are too big, too complicated, too obvious. Writers can decide their life’s work and themes, but life, as we know, often has other ideas. Events and experiences orbit the writer’s consciousness, to be cherry picked as components of a story. I will include that anecdote from the bus. I will not include the story of my mother’s death.

In 2014, aged 41, poet and essayist Anne Boyer was diagnosed with triple negative breast cancer. It was aggressive and debilitating. Boyer learns quickly, as all patients do, that illness is an interruption. A decision must be made about this interruption. Does the writer allow it to become a subject, or ignore the intrusion? The illness has to happen, before it is recorded, before it chosen as a subject. “Everything about being sick is written in our bodies first,” writes Boyer, “and sometimes written in notebooks later.”

Boyer’s resistance to addressing what happened may come from a recognisable place of what occurs when one writes of the self. That the focus will be on subject or emotional gravitas, not craft; that it will be “judged by its veracity or its utility or depth of feeling, but rarely by its form, which is its motor and its fury.” Boyer contrasts this with the equivalence of how others document their breast cancer narratives: the words “I” and “cancer” never appear in the same sentence in Susan Sontag’s Illness as Metaphor, after her own diagnosis in 1974, while Audre Lorde’s 1980 Cancer Diaries do not attempt deflection. Any serious diagnosis brings a patient into a new land. They must learn the routines and etiquette; they must become fluent in its language.  Boyer recalls that her journal entry on the day she discovered the lump mentions everything except the hazardous mass in her chest. “I was afraid, on the first day, for my vocabulary.” Virginia Woolf’s “poverty of language” assertion is often quoted by those who take illness or the sick body as their subject. Boyer looks instead to another writer when describing her exhaustion and multifocal pain, borrowing Clarice Lispector’s line: “it’s like taking a photograph of the scent of a perfume.”

Illness invariably brings an initial incomprehension – the existential enquiry of why did I get this? why this disease and not that one? The Undying is partly a response to this questioning – a reckoning with the facts of a body, an inquiry into a situation we spend our lives trying to avoid. Boyer splices her own narrative into one about wealth, capitalism, and the crypto-fallacy of wellness. She watches Youtubers who have the same cancer, documenting their lives as the clock counts down. Boyer is also interested in how art has represented the sick, turning them into an ill Pieta, grey-pallored in their sick bed, declaring she has “never seen a sickbed scene from the point of view of the person in it”. This could be countered with Frida Kahlo, who painted countless self-portraits of herself in bed after spinal surgery and miscarriage, but her illness was not cancer, which is always the apex of any medical pyramid.

Illness is a form of durational art. A horror show of repeated gestures and performative tics. Part of the audience for this charade are those who are not sick. The people who suggest juicing or diet cures. “Those who are not you, and do not have cancer… who suddenly appear in your inbox or by your bedside like a prophet/shaman/medium, providing as much solace as a headsetted worker a taking your order at a drive through.” But there are genuine friends who come and take care of Boyer. She writes of the isolation of illness without a partner or family nearby; of being a single parent trying to support her daughter. A patient will sometimes need things they never thought they required or felt capable of asking for. There are often no answers. No one is more in the dark than the human that is opened, operated on, and stitched up. After one surgery, Boyer upsets a friend by asking her to count her wounds. “I want to know what has happened to it. I was drugged and no one explained what they did to me. I don’t even know how many holes I have.” There is a necessity in affirming your own flesh, even when it’s failing or unrecognisable.

Boyer navigates her experience – as patient, parent, worker – with anti Kübler-Ross model. Instead of denial and bargaining, there is justified fury – “If I live another 41 years to avenge what has happened it still won’t be enough.” The locus of many cancer stories is the linear traipse towards recovery, but this is not a writer who would ever opt for obvious chronology. One huge concern, not just for herself but for anybody who moves through the US healthcare system, is the overwhelming cost and materiality of care. Boyer notes that pharmaceutical companies “charged everyone in the world $107 billion for cancer drugs in 2015”, which is greater the GDP of more than one hundred countries. The medico-ethics are not just confined to cost. One of Boyer’s chemotherapy drugs derives from the Himalayan Yew tree, which has been endangered since 2011. In 2014, a major breast cancer foundation partnered with Baker Hughes, an oil and gas corporation to produce 1,000 pink fracking drills, conveniently ignoring the link between fracking and release of carcinogenic chemicals linked to cancer. Even the globally recognised pink ribbon campaign, originally started by one activist, was soon highjacked by corporations as a way of promoting their own products, not awareness of disease. To Boyer, “every pink ribbon looks like the flag of a conqueror stuck in a woman’s grave.”

Hospitals, although they shouldn’t be, are businesses. In the US, patients vie with profit margins; assimilated as commodities into a capitalistic carcinogenosphere. Boyer comes face to face with this many times, but there is one particularly shocking moment: “In the capitalist medical universe in which all bodies must orbit around profit at all times, even a double mastectomy is considered an outpatient procedure.” It’s hard to absorb the reality of what she’s recounting. After life-changing surgery, the hospital sends Boyer home, and she is back at work in 10 days. She has little choice but to deliver a lecture on Whitman with post-surgical drainage bags still stitched to her chest. “How many books, to pay back the world for my still existing, would I have to write?”

But the cost is not merely economic. The toll taken by chemotherapy and its side effects is immense. The drugs are so toxic that those administering them have to be specially protected. One doctor reveals that the severity of the treatment itself can actually kill patients. If you survive cancer, no one talks about the cost of that recovery. Someone tells Boyer that “choosing chemotherapy is like choosing to jump off a building when someone is holding a gun to your head.”

This is the dichotomy of cancer, and The Undying is very attuned to the antithetical nature of care. You can live or die. Get treatment or refuse (like Kathy Acker, who appears on these pages). Get treatment and die from the effects of it. Afford treatment and live. Not afford it and die. “The same sonogram,” writes Boyer, “that could find a new life in a person’s womb can also find an embryonic death there.” Writing about illness is both singular and manifold. No two diagnoses are the same; no bone break is identical in depth, no two scars take the same time to heal. There is a democratisation in illness, in that anyone can get sick, and the physicality of the cancer patient is destined to stand out: “the same bald head, the same devastated complexion, the same steroid swollen face.” An army of the sick.

Reading this book brought me back to my own experience of illness; of the inexpressibility of pain, of a chest port inserted under the skin to administer chemotherapy, the annihilating exhaustion of the treatment, the oxymoronic news that the medication that saved my life may have damaged my heart permanently. Hair loss. Needles. Loneliness. Many times I wanted to put this book down because it brought me back to rooms and wards that I don’t want to remember. The immersive quality of Boyer’s narrative is intense, but what else could it be?

Patients stand on the precipice of their own life, but they don’t fall into the canyon. You pick your way back, with broken-nerve endings, your own extremities altered forever. Even when well, it is impossible to recognise the post-illness body. It is not the same – it never can be. Boyer knows this, and other people tell her too. “A woman tells me that she, as she had once known herself, has never really returned from the cancer she had 30 years ago.” She is perceptive on the gendering of illness and care. Her encounters in waiting rooms and at hatches and cubicles are with women, and this is the demographic of the people who make you better: the admin staff who locate a bed, the nurses who clean your wounds, the women (and they are always women) who come and take away the plate of crackers you are too sick to eat, and the vacuum-packed cheese because fresh fruit is a possible source of contamination. The costs of getting sick in the US disproportionately affects single women (like Boyer) and women of colour.

With sickness, there is little light and lots of shade. Boyer is receptive to those small moments when that light appears and finds a way to acknowledge the humour in some of them. “When your eyelashes fall out, send them as a reverse wish to every person who has, at your illness, disappeared”. When she and a friend fill out prayer cards in the lobby of the ‘cancer pavilion’, she writes please pray for American poetry.

There is a kinetic sense of push and pull in this work. Of wanting to articulate illness and its environs, its machinations, its boring interruptions – but also of not wanting to be the illness, or be defined by it. Perhaps Boyer is channelling Audre Lorde, who wrote in The Cancer Diaries, “Your silence will not protect you”. Forming thoughts with a brain that still works and lungs that still breathe are the physical parts of articulation, but The Undying is about more than that. It is about the necessity of that act of speaking, and how a single story is really a global narrative. After all, we are all potentially – as Boyer reminds us – “future sick persons”.

In writing The Undying, Boyer states: “I wanted to write about pain without any philosophy”, but there is a philosophical disquisition at work here, and Boyer negates the form of traditional memoir, or linear non-fiction, by working both internally and outside of it. It is defiant and gloriously multiplicitous in its aims, form, and provocations. To write that, “Every person with a body should be given a guide to dying soon as they are born” is both philosophical and palliative. This book accommodates anger but never rants, offers insight but (thankfully) no catharsis. It offers a new, necessary lexicon and unshakeably parses “the gorgeous framework” of mortality.

Sinéad Gleeson's debut collection of essays, 'Constellations' was published in 2019. She also writes fiction and has edited three short story anthologies. A fourth - 'The Art of the Glimpse: 100 Irish Short Stories' - will be published by Head of Zeus in 2020.

A Boat To Bilbao

For Lauren Who Named Her Goldfish after Ted Hughes