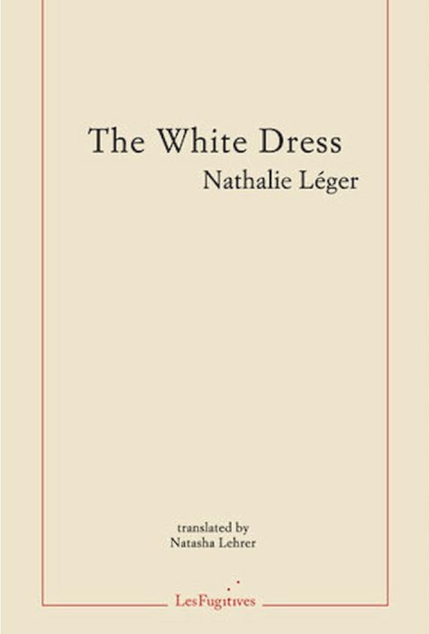 In her 1975 essay on the male gaze in contemporary cinema, Laura Mulvey famously articulated Woman as “bearer … not maker of meaning” in Hollywood’s mainstream output:

Mulvey’s thesis followed from John Berger’s important demonstrations of the way the image has been employed to objectify women. In Ways of Seeing, he writes that a woman:

I thought of these texts while reading The White Dress, the last in the French author Nathalie Léger’s compelling trilogy of what can be loosely described as novels, but which incorporate elements of biography, criticism and memoir. These slim books, which operate as sites of enquiry into the lives of women the author became interested in through her research work as a curator, draw upon the interrogations of Mulvey and Berger to consider if it is ever possible for a woman to take control of the gaze, to reclaim her to-be-looked-at-ness, to become a maker of meaning in her life.

The works are also personal explorations: Léger uses her subjects’ stories to interrogate aspects of her own.  Woven through the books are the author’s memories of her father’s extra-marital affair when she was a child, her parents’ bitter divorce, and her mother’s lifelong yearning for justice, for her side of the story to be told. It’s a yearning that has all but destroyed her mother’s life, made difficult her relationship with her adult daughter. In this respect, it’s interesting to note the complex, often unlikeable nature of Léger’s characters: the author’s own self-interrogations have drawn her to those who, like her mother, like Léger herself, are not strong, straightforward, feminist heroes. Instead, they are women who, resolved as they are to eschew the determining nature of the male gaze, to reject their traditional exhibitionist role, continue to struggle with their own sense of being.

Léger’s series began in 2008 with Exposition, a semi-fictionalised work about the Countess of Castiglione, the most photographed woman in late 19th century Paris. Next (although the English translations appeared in reverse order) came the critically acclaimed Suite for Barbara Loden, about American actress and filmmaker Barbara Loden, who directed and played the title role in the 1970 arthouse road movie Wanda. The White Dress continues Léger’s examination of female artists’ complicated relationship with the gaze by considering their enactment of themselves through performance art. The book, which was published in French in 2018 and appears now in Natasha Lehrer’s English translation, follows the journey of the young Italian performance artist Pippa Bacca, who in 2008 hitchhiked from Milan to Jerusalem, while wearing a customized white wedding dress. Léger explains Bacca’s thinking, and her own fascination with the artist’s project:

She wanted to bring peace to countries that had known war. She said she thought she could do that simply by wearing a wedding dress. I wasn’t interested in the grace or foolishness of her intentions; what interested me was that she hoped this gesture would be enough to mend something that was out of proportion with it – and that she did not make it.

Bacca did not make it. Part of the principle of her project meant she would never refuse to get into a car, to “prove that when you show trust you receive nothing but goodness”; but in this, it seems, she was wrong. On 31 March 2008 Bacca was raped and murdered after accepting a lift on the outskirts of Istanbul. She was 33 years old. She had documented much of her journey by video camera, which was taken and used by her murderer. “He raped her,” writes Léger, “he killed her, he stripped her naked and finally he stole her gaze.”

Léger ponders Bacca’s fate in the context of other female performance artists such as Marina Abramovic and Carolee Schneemann; she considers the hostile, brutal responses to their work, which highlight the threat of violence that shadows women’s lives, especially when they attempt to take ownership of how they appear to others, to men. Schneemann was attacked when a man grabbed her throat in the middle of a performance; when Marina Abramović invited an audience to choose from 72 objects (including flowers, bread, razor blades and a pistol) and use them on her as they desired, she was tied up, stripped, beaten, cut until she bled. A man loaded the pistol and held it to her neck. Léger notes that though some protested the treatment of Abramović, others watching the performance shrugged and said that it was exactly what she had asked for.

It would be easy to judge Bacca similarly, and people did. Léger meets a male Science and Technology correspondent who tells her Bacca was nothing more than a “do-gooder wanting to right the wrongs of the bad guys, trying to bring about world peace in a white dress”. A male television presenter said Bacca had made the mistake of confusing art and life, an indictment that, interestingly, seems to be levelled only at women artists as a means of diminishing their work: think of the gushing responses to the ‘novels’ of Karl Ove Knausgaard, books that make no such distinction. Léger doesn’t dispute that Bacca’s gesture was heavy-handed, her project weighed down by symbols. But no matter how confused the ideas behind an artist’s work, Léger’s view is that a performance can “nonetheless stubbornly articulate something true.” She remembers, for example, the two elderly women she watched responding emotionally to a video of Faith Wilding’s performance piece, Waiting. She thinks, too, of the images that remain of Bacca’s journey, images where the artist often appears haloed by light:

It was the white of her enormous gown, backlit, it was the entire purpose of her journey, an idealistic cloud, the urge to repair, the desire to spread goodness, not goodness itself, but the idea of goodness – and it is unclear whether it was enough, or, rather, what is clear is specifically that it was not enough, but perhaps conversely goodness cannot be anything but an idea, and it is possible that this idea matters a great deal, it may be that it is not always necessary for facts to confirm an idea for the idea to be true, and the opposite may also be true.

For Léger, the important thing is that Bacca proceeded with her project, even if she did so hesitantly. In her books, Léger has documented her own difficulty in proceeding, as she comes up against various obstacles in her attempts to find her way into the stories of the women who interest her. There are records she cannot access, people who refuse to talk to her. Other things interfere, make her lose focus: her childhood memories, her relationship with her elderly mother, who keeps asking her to tell the story of Léger’s parents’ divorce from her mother’s perspective. Like the work of the women she writes about, Léger’s books are a mix of art and life, and The White Dress, in particular, is a reflection on the porous boundaries between the two, on the impossibility of siphoning off one from the other, even as the author appears fearful that, in her inability to do so, she may also be viewed as mistaken or confused, her work somehow reduced in the eyes of the literary and intellectual community. “I’m done with family history,” she says to her mother. “Our two subjects are not one and the same.” But the implication in the book is that they are.

This is made most clear towards the close of The White Dress, when Léger relents and reads the transcript of her parents’ 1974 divorce hearing. This shows how her mother endured public testimony leveraged against her by her husband, his mistress, her children’s grandparents, her sister-in-law, all of whom spoke about her “domestic and educational deficiencies” and said that she was “incapable of looking after her children”, that she had scorned her husband, allowed “her household duties to slide”. She was not offered the right to defend herself, and her husband was provided with custody of the children. Léger is so enraged, so stunned by what she is reading, that she acquiesces, writes down her mother’s story, puts back “the missing words.” “You’ve written it for me,” her mother says, “you’ve given me back my living voice.” If Léger’s ideas are confused, if she has difficulty in focusing on her project, if she stops short of interviewing Bacca’s mother despite travelling from France to Milan to do so (she never leaves the train station), she has still articulated “something true”; she has, as her mother tells her, “placed sentences like a handful of pebbles on the counterbalance of the scales … sculpted a little memorial in words”. Through the mix of art and life, she frees her mother; in a way, she frees herself. “Go on then,” her mother says, “you can go back to your project now, finish telling the story you’ve started, if you can.”

Léger doesn’t know if she can finish the story, but she resolves to try. To do so, she shifts her attention to the viewpoint of Bacca’s rapist and murderer, who took the artist’s video camera and used it for his own purposes. In the book’s final pages, Léger describes in detail the scenes of a family wedding he filmed: the preparations in advance, the young couple dancing after the ceremony, the children playing. She writes: “He never stopped pointing the camera at everything around him, as though he had taken refuge inside the film, slipped inside it, escaped into someone else’s story, as if he wanted to imprint it, to smash his body and his sin onto the images.” Eventually, the man turns the lens on himself. It is his face, not Bacca’s, that appears at the end of the book. Léger cannot give Bacca back her narrative, cannot retrieve her stolen gaze. What she can do—what she does instead—is what she has done for her mother and for herself. She places the sentences on the page, sculpts the memorial in words. In doing so, she is acknowledging, claiming validity for, Bacca’s gaze—and the gaze of the other women she has written about. That gaze exists; it must be recognised, doubting and messy though it may be. “It’s just about getting some form of redress,” her mother explains to her. As Léger says in the book, “it’s not much, but it’s key.”

Rachel Andrews’ essays and criticism have appeared or are forthcoming in outlets including the London Review of Books, n+1, Brick literary journal, the Stinging Fly, Longreads, Gorse, Banshee, the White Review, the Irish Times and the Dublin Review. In 2018, she was runner up in the inaugural Hubert Butler Essay Prize and in 2017 was shortlisted for the Fitzcarraldo Essay Prize and the Notting Hill Essay Prize. She lives and works in Cork City, Ireland.

The Rest of the Day