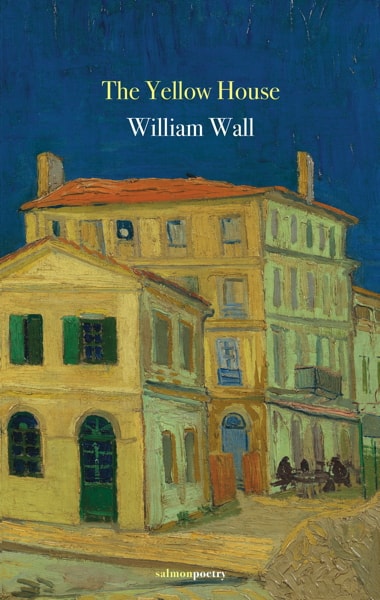 It is seven years since William Wall last published a collection of poetry. That collection, Ghost Estate, was very much a reaction to the climate of Ireland in the years immediately following the economic crash and the bursting of the Celtic Tiger bubble. Wall has not been silent in the intervening years, writing poems, translating Italian, and publishing new collections of short stories which have helped cement his reputation as one of Ireland’s better contemporary writers. His new collection, The Yellow House, takes its title from a Van Gogh painting of the artist’s home in Arles, and it is also filled with ghosts, but of a more personal nature than those of the ghost estates. Death and water are everywhere in these poems.

The book opens with the titular poem, ‘The Yellow House’ and closes with the poem ‘Lament for the Yellow House’. The yellow house is not just Van Gogh’s home, or the painting, but also the house where Wall grew up, which was burned down in a recent accident. As Wall’s childhood home was destroyed, so too was the home Van Gogh made in Arles – the latter by German bombers. Thus we get this mirroring in the final stanzas of each poem. In ‘The Yellow House’:

And from the closing poem:

Later in the collection, in ‘How I learned to Love’, Wall writes of ‘such a tiny shift in space / between being and not.’ The lines refer to his mother, but might just as easily refer to either of the yellow houses of the title, or to any of the dead who populate these pages. Such mirroring, reflecting and repetition is a hallmark of this collection.

Song is a vital element in these poems: ‘The Ballad of Lampedusa’, ‘The Ballad of the Crombie Coat’, ‘The Ballad of the Brothers and Sisters’, ‘The Ballad of Rimbaud and Verlaine in Camden Town.’ Other poems are laments, and some are reprised, as one would reprise a piece of music. In ‘Via Antonio Gramsci’ we are met with the refrain ‘and someone singing bandiera rossa / sotto voce’ — the song of the Italian Communist Party. As in Ghost Estate, Wall’s politics are unabashedly on display here. Wall is distinctly of the left, but most of the poems avoid falling into the arena of agitprop. Only two poems seem a bit out of place: ‘Ten best places to write a poem’ and ‘Wallace Stevens was in insurance’ — perfectly serviceable poems, but out of step with much of the rest of the collection.

More assuredly, Wall takes aim at Ireland’s homeless crisis in ‘The ballad of the Crombie Coat’, which details the death of Jonathan Corrie, a homeless man. The homelessness crisis in Ireland is a crisis made all the more unthinkable given the amount of homes left empty in the wake of the crash:

Lest there be any uncertainty, Wall provides us with notes on poems like this one, and several others. These notes often also conceal as much as they reveal. The mention in ‘The Yellow House’ of his uncle’s role in the Invergordon mutiny of 1901 receives no note, though it is surely a more obscure reference (at least to those with less interest in radical political history) than most issues covered in the notes.

Death is a strong presence, particularly in the ‘Five Elegies’, written for family members and friends who have passed on. The second of these, ‘Watching a Schooner’, is written in memory of Wall’s mother, and is the most affecting of the five. Indeed Wall’s mother and family are central to many of the poems in this collection. While there is death, there is also a great deal of love. The poems are littered with evocations of a certain kind of love – an old and steady love – that is understated and solid in its foundations. There is the love between Wall’s grandparents in ‘How I learned about love’ – where he says of his grandfather, “and love was his anchor” – and that between his parents, and finally the love shared by Wall and his own wife, best exemplified in the final lines of ‘Thirty years ago I wrote’:

I have sheltered
In your seams the way
lesser creatures do.

This interpersonal love is sometimes in contrast to the lack of love shown for the dead, such as Alan Kurdi, the three-year old boy whose drowned body was infamously photographed after washing ashore in Turkey during the height of the Mediterranean refugee crisis in 2015. The poem ‘Holiday beach’, which centres on Kurdi, is one of several which deal with the difficult journeys people have been making to enter Europe as refugees in recent years. These difficulties are mirrored in earlier tragedies of drowning that Wall draws on in the poems ‘In the Greek Theatre’, ‘Shipwrecks’ and the aforementioned ‘The ballad of Lampedusa’. The poems dance between Ireland and Italy, between the Aegean, Mediterranean and the Irish Sea – there are crossings and crossings over.

The poems in The Yellow House bear reading and re-reading. On finishing the collection, you are left with a feeling both powerful and affecting. The poems are moving but never merely sentimental; sometimes lyrical, but not self-obsessed. The emotional range is matched by the artfulness of execution. We are lucky that Wall writes poetry this well. If Wall means what he writes in the penultimate poem of the collection, ‘The ship of Theseus’: ‘I remake myself / in every new phrase’, then we have much to look forward to in the future.

David Toms lives and works in Oslo, Norway. His most recent book is Northly, out now from Turas Press.

Nothing Can Dislodge The House