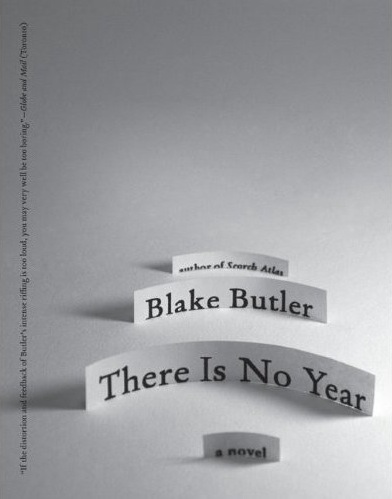 There Is No Year

In advance of endeavouring to read There Is No Year, it helps to know that Blake Butler wrote the first draft of the novel ‘kind of in a daze of ten days, letting each image eject itself from the one prior, in an almost sleepless state.’ During this formative ten days of writing he also moved apartment, lost six pounds in weight, drank an obscene quantity of coffee and watched David Lynch’s Inland Empire four times over. Knowing all of this may help to explain why There Is No Year depicts a world of Lynchian creepiness, a world in which people sleep with their eyes open, giant cameras are suspended inside the ozone layer and parallel universes are reflected in a fingernail. It may also account for why the book is a maddening read, why its style and substance throughout have the feel of something written quickly and thoughtlessly, and why the enduring reader will be driven slowly demented as the chapters grate by.

It is unlikely that you will have heard about the release of There Is No Year from the book pages of Saturday’s Irish Times or the Guardian Review. Most of its buzz has taken place online, as did most of the buzz about Butler’s previous two books—an illustrated novella entitled Ever published by Calamari Press and the so-called ‘novel-in-stories’ entitled Scorch Atlas published by Featherproof Books, both in 2009. Butler’s stories have appeared in magazines such as The Believer and The New York Tyrant and he edits the online literature magazine HTMLGiant, as well as a handful of other innovative blogs and journals. Butler is thirty-two years old and his author’s photograph on the inside flap of the book’s back cover shows a chiselled face and crop of blonde hair in a sinister shaft of light.

On the other side of the flap, as part of the Advance Praise, there is a quote from The Atlantan magazine that opens with the sentence: ‘All words normally used to craft literary reviews fail.’ To the reading demographic of the Saturday review pages, for whom literature follows some form of coherent narrative portraying characters and situations with which one can reasonably empathise, Butler is no doubt something of an enigma, his book something of an oddity. To attempt to haul a plotline from its string of strange occurrences or to sketch character development from the mysterious beings that populate it, indeed to attempt to review There Is No Year in any formulaic or standard fashion, is a daunting prospect.

The first section of the book introduces a family of mother, father and son. They move into a new house and find a copy family waiting there for them, three inanimate replicas of themselves. In the second section a polymer egg appears on the front lawn and the mailbox fills with a wriggling mass of caterpillars. By the third section the family are still coping somewhat fractiously with the conflicts of their surroundings—the mother is walking through the woods with a steak knife, the son is following the instructions of bizarre tattoos that keep appearing across his body and the father is doing his level best to clamber inside a box he found in the street. Because Butler writes in poetic riddles, it is easy to lose track of the characters and their activities whilst attempting to decipher his portfolio of ’storytelling devices’, his use of italics to denote flashbacks, his use of repetition to place emphasis, his overly generous spacing. There are also the sundry distractions of the book’s physical design, from its subtly varying shades of grey to its shady photographic imagery. By the fourth and final section it is hardly surprising that the end comes abruptly and feels ultimately unsatisfying.

Much of the book is written in a style of direct spoken idiom that obviously enjoys its own pose of apparent artlessness, hoping perhaps to reach a kind of modern automatic writing. There are even emoticons and footnotes and lots of emboldened headings like ROOM OF HAIR and PORTAL. Butler writes in contradictions and leaves his sentences unfinished in the same way that the vast majority of his chapters are also left somehow incomplete—events build steadily toward something grave and momentous but the curtain keeps closing. Yet there is also, at times, an unforeseen charm to Butler’s peculiar use of language. There is a scattering of good, weighty words and harshly evocative phrases like ‘slunk’, ‘doughy’, ‘unsmushed’, ’spit-shined’ and ’gummed with glow’. There are even a few gratifying ‘nail-on-the-head’ sentences, ‘…the pizza was still warm and even more delicious since they’d had that extra time to let their stomachs think.’

Butler is a master of the macabre, adding a sickly tinge to everything inside the world he creates. For the reader, nothing ever soothes or settles, and one feels constantly cast adrift somewhere between the real and unreal. Yet alongside the terrifyingly fantastic, there is the crushingly mundane—the acutely observed minutiae of human frustration which give the characters the occasional glimmer of humanity, and where Butler executes unexpected instances of startling poignancy.

In a review for The New York Observer, Michael H.Miller wrote that ‘the novel could only come out of the mind of someone whose full-time job it is to be on the Internet, another collection of words or images with no conceivable beginning or end (and definitely no answers.)’ It makes sense that in the very back pages of There Is No Year, under acknowledgements, Butler has chosen to close with the words ‘Thank You, Internet. Thank You.’ Certainly the book would make an interesting case study in any discussion about the effects of the world wide web on literary fiction, about whether or not the contemporary ‘Internet Age’ calls for a re-invention of written expression, for passages of description to be replaced by lists of ironic pop cultural references, and conventional dialogue to be replaced by transcriptions of chatboxes from social networking websites. Yet Butler is definitely no pioneering genius. His Lynchian creepiness is a hollow imitation of the master and the book itself isn’t ground-breaking—overly familiar as it is in format and subject matter to Mark Z. Danielewski’s House of Leaves.

There is little doubt that many readers will find Butler’s writing too self-consciously cool and experimental, too gracelessly avant-garde. What There Is No Year does manage to achieve is a frighteningly succinct representation of everything dark and menacing about the times we live in: about an age of anxiety where people are constantly made to feel inadequate due to sheer overexposure; and a society in which it is widespread and acceptable to medicate our mental well-being.

Unlike countless other novels enjoyed but instantly forgotten, There Is No Year is a challenge to enjoy but guaranteed to hold fast to any reader who endures its dizzying twists and skin-crawling ambience right through to the author’s shady photograph.

Sara Baume won the Davy Byrne’s Short Story Award in 2014, the Rooney Prize in 2015, and the Geoffrey Faber Memorial Prize in 2016. She is author of two novels, Spill Simmer Falter Wither and A Line Made by Walking.

A man died in the valley today