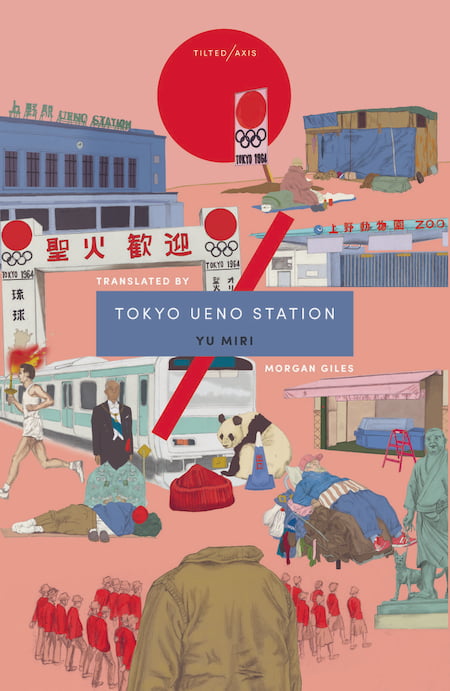 The Yamanote train line runs on a loop. It draws a distended oval through central Tokyo—through Harajuku to Akihabara to Ueno Park. Yu Miri’s Tokyo Ueno Station is also circular, travelling through time and place and the events of Kazu Mori’s life.

Books that get translated are usually already proven bestsellers in their native language, or they fit into a kind of literary tourism with genres defined by location. For Japanese literature in recent decades, this has produced translated works that trend towards surrealism or not-quite-magic realism. Haruki Murakami has led the way, with younger female writers such as Banana Yoshimoto, Yoko Ogawa, and Hiromi Kawakami moving in fresh (and, in my opinion, more interesting) directions. Yu Miri’s novel may be part of this movement in some ways but it defies it in others. Published in Japanese in 2014, and now translated to English by Morgan Giles, it’s not set in a Japan of enigmatic dreams or inexplicable cats. It is a restrained and naturalistic ghost story; a bare portrayal of a man who helped to build modern, post-war Japan but experienced none of its glory.

Kazu Mori began working when he graduated from elementary school. He farmed and fished, and then laboured on the 1964 Olympic sites with bare hands and wheelbarrows. He left his family in Fukushima, a farming area famous in Japan for its fruit long before it became known globally because of a nuclear disaster. If at first it’s not clear that Kazu is haunting Ueno Park, it’s because he is homeless, and to be homeless is to become invisible in a way, to become a kind of ghost. An elderly man looking back over his life is not a new narrative structure, but it exemplifies regret, which is just a more common kind of haunting.

The Japanese year is measured in seasons, marked by the ripeness of food or whatever the trees are doing. Time is noted similarly in this book, but not from any romantic cycle of life: the hydrangeas look like a demon’s face, and New Year’s is when the debt collectors do not come. For Kazu, his life has been measured out in employment, by the months he worked on boats or in fields to send money back home — first to his parents and siblings, and later to his wife and two children, whom he sees only a few times a year. He learns to do this too well: “I could adapt to any kind of work; it was life itself that I could not adjust to.” Kazu’s eventual homelessness is not caused just by the lack of a physical home, but of a spiritual and emotional one, too.

“The calendar separates today from yesterday and tomorrow, but in life there is no distinguishing past, present and future. We all have an enormity of time, too big for one person to deal with,” Kazu observes. The novel slips between past, present, and future to demonstrate this. It occasionally does this a little too seamlessly and somewhat confusingly, often with no visual or textual delineation as the narration switches between times. The present interrupts the past with snatches of overheard conversations that demonstrate Miri’s deftness at revealing lives through simple dialogue. These moments work far better than the periodical tour-guide monologues about Ueno Park’s history, fascinating as that history is.

As past overlaps present, so do Kazu and the Japanese Emperor Akihito’s lives mirror each other, and like any reflection, they are opposites. When Kazu sees the Emperor, it is because the homeless have been evicted from the park so that the imperial family can have a scenic drive, and the emperor that he sees has a face that “has never known sin or shame.” Kazu is so close that, “only tape separated me and Their Majesties” but nothing could be less true: the distance of an entire society is between them.

Unjust and unfair as this is, however, this book rarely rages and Kazu does not engage in self-pity. The tone is sad, resigned, and bewildered more than anything. There are intervals of tranquility—charm, even—when Kazu eavesdrops on the people in Ueno Park. There are two older ladies looking at old school photos, a young man writing an enma prayer board in thanks for completing a marathon, a salaryman talking to a colleague about his recent love of dried sardines. The book has moments of intense brilliance: in the profound numbness of grief, or in the destruction of the tsunami, when Kazu “felt not that I was watching the landscape but that I was being watched by it.” These are the glimpses of what is beyond the park, other lives and times.

Yu Miri is zainichi Korean: of Korean descent but born and raised in Japan. Despite being born in Japan, speaking Japanese as their native tongue, never having lived in Korea, they are not considered Japanese citizens. They are ‘Special Permanent Residents’, and there is still discrimination enough that many zainichi choose not to reveal their roots. Unlike Min Jin Lee’s Pachinko, this isn’t Miri’s subject in Tokyo Ueno Station, but Miri has nonetheless spoken about feeling neither Japanese nor Korean, and finding this in-between state to be a valuable one from which to write. Miri’s novel, like her protagonist, exists simultaneously in and outside the very midst of place and time. Kazu drifts through a park in the middle of the most populous city in the world, through conversations and the huts of the homeless. His home prefecture is Fukushima, a historically poorer area, which made it easier to locate the nuclear plants there; they powered Tokyo up until the 2011 earthquake and tsunami. Tokyo Ueno Station moves through a country’s complicated history, looking past its famous beauties and infamous tragedies. It reveals who built it, who was erased by it, and who has been trapped.

“That day—time has passed. Time has ended. But that time is scattered here and there like spilled drawing pins.” Fittingly, the novel’s translation is also uncannily timed. Kazu was born in the same year as Emperor Akihito, and their lives are linked by coincidences, such as the birth of their children. In Japan, years are counted as the number of the current emperor’s reign, each with its own particular name. 2019 was the thirty-first year of the Heisei era, and the last one. On the last day of April, Emperor Akihito abdicated, becoming the first emperor to do so in 200 years. The new era, Reiwa, began the next day, when the new emperor sat on the Chrysanthemum Throne. The government has announced that its meaning is ‘beautiful harmony’, though another translation is ‘compulsory peace’. This era, like Kazu’s, will also hold an Olympics. It, too, is being built.

Built on what, though? This is the question that Miri’s novel raises. “As I retreated to the future,” Kazu says, “the only thing I could ever see was the past.” It’s this conundrum of movement that imbues the book. Miri’s novel wonders what kind of future this will be for Japan, who will make it, who will use it. The future isn’t entered with bravery or eagerness, but because there is nowhere else to go. If Miri stands out from contemporary Japanese literature in translation, it’s because this book is more political. It isn’t explicitly so; it doesn’t articulate criticisms of government or nation, but it is deeply political in its juxtaposition of lives – present, past, and future – and in its articulation of a displacement so far-reaching that a man has become lost in both life and death.

Tokyo Ueno Station opens and closes on a platform of the Yamanote line. It’s a circle made of two tracks, so one travels clockwise and the other anti-clockwise. It reaches the same places, but there is a choice; we can go with the clock or against it. Miri’s novel shows us that either way, we go looking backwards.

Clara Kumagai is from Canada, Japan and Ireland. She writes fiction and non-fiction for children and adults, and has had work published in Banshee, Room, Event, and Cicada. She currently lives in Tokyo.

The House of Love