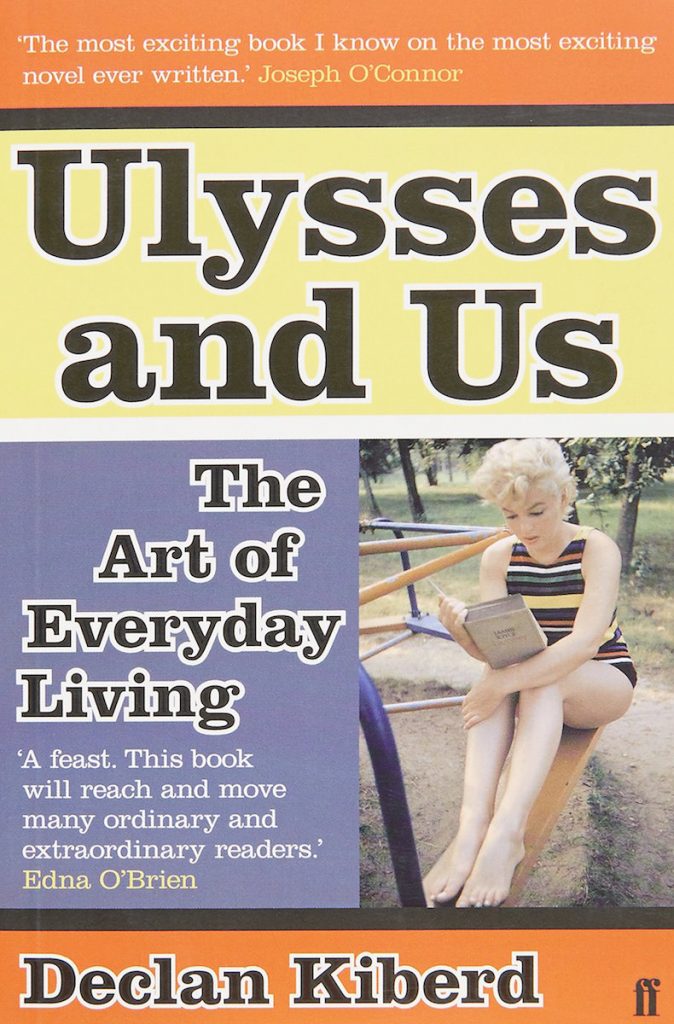 Ulysses and Us: The Art of Everyday Living

In an article entitled ‘Things to Do in Dublin to Get Smarter,’ The Dubliner magazine recently included as one of its top ten tips (along with Play Chess, Take The Mensa Test, and Switch Off Your TV), ‘Read Ulysses. And don’t just skip to the saucy bits this time.’ The article appeared around the time of this year’s Bloomsday, as did Declan Kiberd’s Ulysses and Us: The Art of Everyday Living. In twelve words The Dubliner perfectly describes the peculiar place in the popular consciousness which Joyce’s ‘Blue Book of Eccles’ has come to occupy, and suggests the resulting problem that Kiberd’s book seeks to address.

Eighty-seven years after its first publication, efforts both glib and book-length are still being made to entice the average reader into picking up a book that was written for him. Ulysses is a book of the common man, an epic in praise of the quotidian, but its fate so far has been to remain largely unread by those very people it set out to celebrate. Even Ernest Hemingway, who ‘worshipped Joyce as the leader of intellectual Paris in the 1920s,’ is revealed here to have left his copy of Ulysses to posterity ‘with all but the early and final pages uncut.’

Reading Ulysses has become the preserve of the intellectual, the elite and the nerdily obsessive. The book is ‘to be deciphered, not read,’ viewed by most with a mixture of dumb reverence and intimidated awe, and it is precisely this attitude which Kiberd contends has stood in the way of its being fully embraced by the masses, an attitude which he strives in his opening chapters to elucidate and, in the book as a whole, to repeal.

It is the Bloomsday and Joyce industries, Kiberd writes, which have elevated the book to its quasi-religious status. ‘Like all… cults it has its routes of pilgrimage, special foods, ritual observances and priestly decoders of the sacred text,’ but these devotions have sprung up from academic interpreters, who ‘would elucidate textual references rather than face the more challenging question of what Joyce was actually saying,’ and they are not at all inextricable from, let alone useful to, a personal relationship with the text itself.

The main body of Kiberd’s book is concerned with a close reading of that text, which acts as a chapter-by-chapter walk through of Ulysses. Kiberd’s democratising attempt to free the book from the academy and from Joycean idolisers leads him to do away with the traditional Homeric names favoured by those cogniscenti (Proteus, Wandering Rocks, Cyclops, Nausikaa) and to rebrand the book’s sections with much more manageable appelations (Waking, Learning, Thinking, Walking) which identify the essence of each chapter.

Kiberd, a professor of Anglo-Irish Literature at UCD, is a friendly and knowledgeable guide, most notably in his analysis of the ‘Proteus’ section, here renamed ‘Thinking.’ In this section of Ulysses we see Stephen, wandering and lost, a directionless bohemian spouting his unmediated, overly erudite ruminations as he walks ‘into eternity on Sandymount Strand.’ ‘Many readers drop Ulysses at this point, finding themselves unable to keep up with Stephen’s remorseless and obscure pedantry,’ but Kiberd is a realist: ‘the truth is that Joyce is laughing at the pitiful pretentiousness of the youth he once was. Nobody could understand all that Stephen says or thinks. Nobody could take all of his ideas with utter seriousness.’ It is with encouragements like this that Kiberd exerts his greatest influence on the reader, and this nurturing instinct allows him to progress smoothly and comprehensibly, through his exploration and explanation of not only this chapter but of the book as a whole, and which prefigures and prepares the reader for such nuggets of gnomic wisdom as: ‘The lesson is clear. In order to find the self one must first agree to lose it.’

Other lessons abound, such as ‘How to cope with grief’ and ‘How to think while walking.’ The sobriquet of Kiberd’s book, The Art of Everyday Living, not only refers to Ulysses’ concentration on and elevation of the quotidian, but points to Kiberd’s assertion that Ulysses can in fact be educative, that somehow it can help its reader to ‘get smarter.’

Kiberd places the book within the canon of ‘wisdom literature,’ among such works as Hamlet, the Odyssey, the Divine Comedy and the Bible, and contends that Joyce’s central project is to synthesise a lesson by bringing into contact two oppositional ways of being, so that ‘The leaden, involuted sentences of Stephen are challenged… by a voice from a completely different order of reality.’ Leopold Bloom is the bourgeois whose practical knowledge of living culled from the ‘university of life’ has much to offer Stephen Dedalus, a young man whose solipsistic wanderings and arts degree education have not prepared him at all for the real world. The climax of the book, Bloom’s meeting with and rescue of Stephen, is a reconciliation of these oppositional ways of being in the world. The younger and intellectually superior of the two learns a practical life lesson, while the older man can ‘Learn by teaching.’

Kiberd tries hard to be readable. Though he presupposes in the reader some familiarity with the text, he does not require much more than that. He assiduously avoids the ‘secret codes’ of the Joycean, and peppers his text with quotations and references from other writers, other thinkers, other masterworks of world literature. These, mixed with anecdotal information from Joyce’s letters and from the recollections of his classmates, not to mention the wisdom of such diverse persons as Woody Allen, Claude Monet and the evangelical preacher Billy Sunday, serve to contextualise the book in time and to thoroughly ground it in the realm of the understandable.

Much background is illuminated, and much illumination is enriched by reference to Joyce’s biography, so that the reader may come to understand the book’s experiments through familiarity with their origins and their creator. For instance, in the Eumaeus chapter, here ellucidated under the moniker ‘Teaching,’ we learn that the chapter’s formal call-and-response technique owes a debt to the catechism and to methods of scientific enquiry, but also that ‘As a student at Belvedere College Joyce knew his catechism better than any boy in his class.’

The picture of Joyce that emerges from Kiberd’s book is a rich and compelling one. Here is a social-democratic writer, who preferred not to discuss literature with experts but ‘loved to carry on a dialogue about Dickens with some unknown attendant at the post-office window.’ With Ulysses Joyce ‘shows how the artist and citizen might be reconciled,’ and with Ulysses And Us Kiberd makes a bold attempt to continue this work.

Andrew Fox is the author of Over Our Heads. He lives in New York.