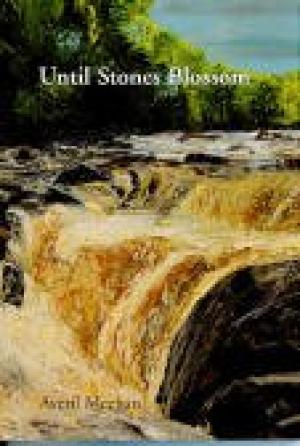 The early poems in Averil Meehan’s Until Stones Blossom make for interesting bedfellows: wrenchingly personal stories of birth, loss and death set against the backdrop of two poems about the Northern Irish Troubles. There is a satisfying chronology to events at this point: life, hard as it may be, plods on, punctuated by the bomb-explosion of ‘Saturday Job’ where ‘Windows sneeze glass shards onto the pavement.’

Later, a peace dividend of bus-driven tourists visits the scenes of recent strife, provoking a pointedly barbed response in ‘Luxury Coach Tour’: ‘Twenty-five historic years/scheduled before a five-star lunch.’ With the troubles ending, Meehan no longer writes about them, or indeed on any other theme outside her circle of relationships. This is a pity, as the expectation has been built up in the reader’s mind by the order of the poems at this point, and I feel Meehan is at her best when not plumbing the depths of her own despair.

The poet uses nature in its many forms to illustrate her themes. In ‘Forgiveness,’ a grave’s autumnal flora creates an abundance in death that is contrasted with a life of parasitic decay. Her ‘Daughter of Seventeen,’ preparing to go to college, is likened to a fledgling, hardly an original thought, yet freshly presented here: ‘Soon you will fly, free/ to make your own mistakes…/… I stand on straw, damp with missing.’

These rich descriptions are not what stay in the mind of the reader, however. The collection is at times unremittingly bleak as loss is heaped upon misfortune.

Although periodic attempts are made to lighten the tone, it becomes increasingly difficult to identify with Meehan’s world view, fuelled as it is by the tragically regular death of those she loves—friends, relations, parents and children—and the doomed nature of her relationships with men. By the time her house burns down, in ‘Hot and Cold,’ the poet seems to be lurching from disaster to calamity, and the reader is left wondering what misfortune could befall her, Peig Sayers-style, next.

There is a kind of false naivety on display at times, too. Meehan seems amazed that those she remembers as elderly and infirm were once young and carefree. This is true in ‘Unlaced’; and in ‘Garments,’ where no discovery is too banal for disclosure: ‘Now I learn that you once wore elegant / hats…/… that you danced / all night and that you laughed out loud.’ Who would have thought?

In ‘Watching Wimbledon,’ the poet is at odds with the female tennis players’ clothing, their ‘dresses…/…far too short to cover frilly pants.’ To the poet, these ‘skits of girls…/…break every rule.’ She seems to resent this ‘liberation’ of sorts, yet I am not sure that the All England Lawn Tennis Club is generally recognised as an institution that pushes the boundaries of taste and decency.

In ‘Dice,’ the scenario of a sick friend buying Christmas presents for the poet as a kind of last act before death seems contrived. We never understand what prompts this most dramatic of gestures and indeed, the poet admits that she had not been in contact with the friend in the run up to her death. This characteristic is present elsewhere too, such as in ‘No Recovery,’ where the considered nature of the poet’s reaction to apparently sudden illness (‘The language I’ve used since birth/ makes less sense than the Latin/ declensions I once struggled with‘) seems to lack the spontaneity that such news might evoke in reality.

While the situation is redeemed somewhat by the authentic vibrancy of poems such as ‘Sodden Scents’ (‘…the lawn is transformed /from brown and beige to olive, spiked / all over with dabs of vibrant green‘), the acceptance and humour of ‘Surviving Motherhood’ and the poignancy of poems such as ‘Wood,’ these successes only have the effect of throwing into relief the melodrama on display elsewhere. The conclusion that presents itself is that a great deal of licence is on display in Until Stones Blossom; events are exploited to maximise the emotional impact of the writing, a device which, in my view, has entirely the opposite effect.

Patrick Boyle is a freelance journalist and mature student at Ballyfermot College. He is Chairman of Phoenix Writers Group in Dublin 15. New members are always welcome (phoenixwritersgroup@gmail.com).