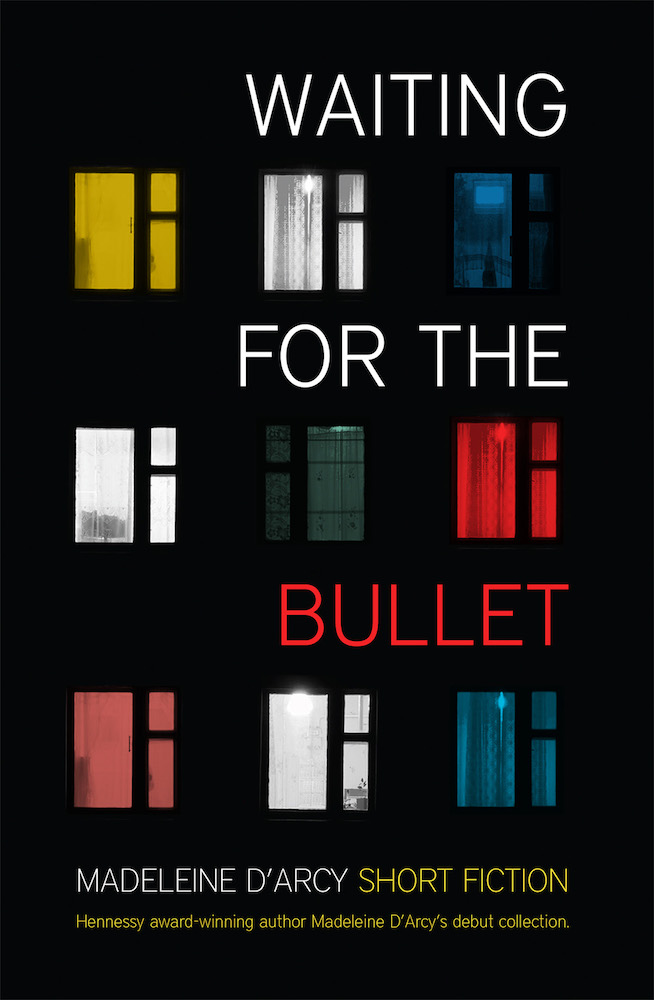 Waiting For The Bullet

The narrator of ‘Clocking Out’, the lead story in Madeleine D’Arcy’s debut collection Waiting for the Bullet recounts a recurring dream where she is walking down Oxford Street, ‘and the thing falls out of me and everybody in the street sees it dragging along behind me on the footpath on its fleshy string and I don’t even notice’. ‘Clocking Out’ is the story of a pregnant woman abandoned to the silence of those around her: ‘Nobody said anything to me when I started getting big. Nobody said a word.’ This is harrowing, emotionally-charged territory, plenteous with opportunities for a writer to get things wrong. In attempting to give voice to the voiceless, there is always the danger that a writer may, paradoxically, engage in silencing of a different sort by taking up position between reader and characters, intruding upon the story. D’Arcy, fortunately, knows when to let her characters do the talking. Here, she wisely chooses a first person narrative and then stays out of our way. What results is a story devoid of sentimentality that delivers the human aspect of the political. ‘I was in pain. It came out. I hated it…’ the narrator tells us, ‘… It was like a dead dog on a leash. I had to bite the stringy bit off or it would drag along the ground after me forever until I died.’

This collection, published by Doire Press, contains twelve stories set in Cork, New York, and London where D’Arcy lived and worked as a solicitor and legal editor for a number of years. Among the themes explored are the human capacity for self-destruction, and our propensity to squander, in particular the way in which we squander love. D’Arcy’s gaze falls not so much on the quest for love, but on the more complex, and arguably more interesting, question of what people do with love after they’ve found it. The male narrator of ‘An Under-rated Emotion’ is dating a younger woman who is ‘smart’, ‘sexy’, ‘beautiful’ and ‘puts up with [him]’. And putting up with him is no mean feat. He isn’t, it’s fair to say, any great catch, and as readers we know something his girlfriend doesn’t: he’s had a vasectomy. There seems little doubt as to who has got the better deal here, and yet we witness the narrator going in like a wrecking ball, running from the happiness that’s within his grasp. It’s a theme revisited in the collection: this wanton turning away from happiness. With this narrator, as with a number of the other characters who populate D’Arcy’s stories, I was put in mind of dogs chasing cars; yes, there’s that initial flurry of pursuit, but they come to a halt, confused and bewildered, should a car actually stop.

In ‘Salvage’, Vincent is in his late thirties, recently separated, and on the hunt for a bedsit in post-boom Cork. Not a man over-burdened with self awareness, he professes to be amazed at ‘the way people sow the seeds of their own destruction’. I was entertained by his tussles with his new landlord’s cat, and by his hapless efforts to contact his ex: ‘Her last text said, ‘Please stop ringing me and texting me,’ so I email her instead…’ Yet alongside the humour, the reader is invited to observe the twin wrecks of the narrator’s failed marriage and career—and the unfolding parallel narrative of the Japanese tsunami, the reportage of ‘dazed, homeless people’ who find, suddenly, that ‘the places they lived in are unrecognisable’. Like Eddie in ‘The Wolf Note’, who defies his wife to go drinking with the lads, things started out lightly enough, but now we’ve ‘gone over to the dark side’.

While the stories may be sweetened with humour, they are not prettified or sanitised. D’Arcy does not sidestep the bleakness of her characters’ situations, but juxtaposes light and dark, using humour to coax the reader forward. In the Hennessy Award-winning story ‘Is this like Scotland?’ Fintan has brought his wife, Annika, to visit rural Cork where he grew up, but the trip is not turning out as he’d hoped. I laughed at his efforts to converse with his Swedish in-laws, and at the confusion in the pub when, in an effort to explain his hunger, he tells his father-in-law he ‘might have worms’. But a deepening sadness unfolds as the visit serves only to highlight the extent of the mismatch between him and his wife. In ‘Housewife of the Year’, the writing, as well as being funny, is also sharply satirical. ‘You needed about eight children to win…’ the narrator tells us, and her mother ‘had only five… But my father died suddenly, soon after she posted the entry form. She was a widow then; that balanced things out.’

In ‘The Fox and the Placenta’ Marilyn is on the verge of giving birth, walking ‘naked in a cowboy mode’ around her front room. She is assisted by two midwives—one from China, one from Derry—and by Brendan, devoted, but possibly not the father. There is plenty of scope for comedy here and D’Arcy avails of it all, yet the story never crosses the line into farce. Even as we laugh we are aware of menace lurking outside the walls—the shadowy presence of another man, and urban foxes on the prowl, ‘hordes of them, packs that come out when daylight turns to night’.

D’Arcy has an ear for dialogue, a way of capturing the nuances in what people say, as well as in what they don’t. She creates intimacy between her characters and her readers; we lean in and listen. It’s a skill that extends to how her characters communicate via text message, as in the entertaining and poignant exchanges between Eddie and his wife in ‘The Wolf Note‘. The wolf note of the story’s title is a reference to cellos, where the vibrations of the cello’s body and the vibrations of a string may cancel each other out. The better the cello, the more problematic the wolf note may be. There’s a rich seam of music running through the collection and the stories often incorporate snippets of song and verse, with lines from nursery rhymes and references to pop hits and ballads woven through the narratives. In ‘Hole in the Bucket’ the sweetly-sinister verses of an old folk song, circular and repetitive, provide a backdrop to the narrator’s denial. And there it is again, that juxtaposing of light and dark, of sweet and bitter, a hallmark of this assured and carefully crafted collection whose stories will follow you around long after you’ve stopped laughing.

Danielle McLaughlin’s short story collection Dinosaurs on Other Planets was published in 2015 by The Stinging Fly Press. In 2019, she was a Windham-Campbell Prize recipient, and won the Sunday Times Audible Short Story Award. Her first novel, The Art of Falling, was published in 2021 by John Murray and was shortlisted for the Dublin Literary Award 2022.

Maybe He Just Slipped In