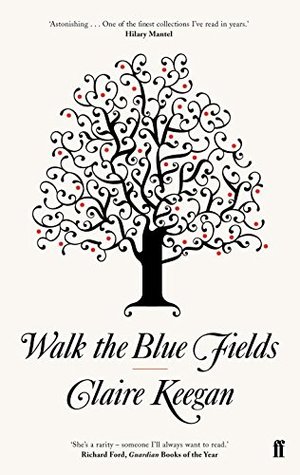 Breathlessly acclaimed in Britain, America, and here at home, Claire Keegan has already achieved the kind of rapturous critical praise which is usually only afforded to established literary giants. The easy critique of comparison has seen this young Wicklow woman equated with writers such as Ann Beattie, Raymond Carver and, most notably, John McGahern; however, the true measure of her talent was always going to depend on how she followed-up 1999’s Antarctica, a collection of stories so brilliantly wrought that the Observer newspaper cited them as amongst the finest written recently in the English language. Praise like that could damn a lesser writer, and so it is to Keegan’s credit that Walk the Blue Fields, her long-awaited second book, more than fulfils the heady promises of her earlier work.

An unrelenting dissection of lost opportunities, Walk the Blue Fields confirms Keegan’s intuitive near-mastery of the short-story form. In the seven stories here, Keegan pursues trajectories of failure and obsession with a measured, almost documentary reserve, and in a prose style that never deviates from clear, crystalline beauty throughout. Walk the Blue Fields embraces the modern in pitch-perfect tones of dissatisfaction and deceit, but also acknowledges tradition through the reinvention of trope and stereotype. Meanwhile, in what is destined to become one of the collection’s most treasured novelties, Keegan acknowledges her stylistic debt to McGahern by fictionalising an incident from his 2005 Memoir.

As with Antarctica, it is the rich psychological realism of Keegan’s characters which propels these stories beyond simple aesthetic splendour. The first story, ‘The Parting Gift’, is told through eerie, second-person narration which allows simultaneously for emotional intimacy and for cold, detached objectivity on the part of the reader. The story, describing a teenage girl about to leave her family and embrace a new life beyond the uncertainty of emigration, presents the unsettling domesticity of abuse in rural Ireland via an effective slow-burn in which the potentialities of the unnamed girl are undermined utterly by her shrinking emotional horizons. Her Leaving Cert inability ‘to explain that line about the dancer and the dance’ reflects her own situation, caught between a grotesque inseparability of home and horror.

The title story paints a variation on this emotional double-blind, this time for a priest officiating at the wedding of a woman with whom he has had a passionate affair. A priest might seem an anachronistic figure, but the respects (and disrespects) paid to the character represent a rural Ireland which still exists today. Indeed, while on the surface ‘Walk the Blue Fields’ appears to present us with a clash of the old and the new Irelands, closer examination reveals it to be quite a traditional story. The ‘Chinaman’s cures’ are a modern update of the Irish predilection for healers and bonesetters, while the story’s frank depiction of sexual jealousy merely externalises a recurrent theme of Irish fiction that has been couched for too long underneath unwieldy metaphors. For all of this, however, it is the brilliantly rendered dinner scene which makes ‘Walk the Blue Fields’ one of the gems of this collection, particularly in terms of the interplay among the wedding guests and in lines such as ‘the priest cuts into the lamb’, which betray a knowing irony in light of the character’s inability to uphold his oath of celibacy.

Obligation is an equally warped notion to Deegan, father-figure in ‘The Forester’s Daughter’. One of the longest stories here, ‘The Forester’s Daughter’ is also one of the saddest and most exhausting. A dense tale with a generational time-scale, the story traces Deegan’s descent from mortgaged bachelor to miserly patriarch. His ramshackle house, haunted by unhappy, ethereal children, is the ultimate metaphor for the loveless marriage in which his wife is trapped, for Deegan’s true love is the land. His endless quest to win back the deed from the bank slowly isolates him from others, isolating his resentful wife by proxy. The refrain of ‘someday it will be over, he will get back the deed’ is repeated again and again, and Deegan is obsessed with burying the document in a steel box beneath the oaks, thereby returning it to the land itself. This love of land ownership is a recurring device throughout Walk the Blue Fields, and in it something truly Irish survives the current crop of pseudo-cosmopolitan fictions trying desperately to convince us of the importance of concrete and cappuccinos. In Keegan’s stories, city life is simply the alternative to dying slowly on the land, and amidst her darkening paragraphs the grim choice is always between one and the other.

As near to an epic as the collection contains, ‘The Forester’s Daughter’ is flanked by two slighter stories, ‘Dark Horses’ and ‘Close to the Water’s Edge’. The former, a Francis Mac Manus Award winner, is a brief and gutting tale of a man who has lost everything through his own intransigence and emotional ignorance. Brady, its protagonist, is a twenty-something farmhand, wallowing in self-hatred and self-denial after ‘the woman’ dispenses with his rural passive-aggressiveness. Rougher than any Macra na Feirme poster-boy, Brady is in many ways the prototypical Deegan, beset financially despite his deep, misguided love for country ways. Ironically, he could not be more different from the young man at the centre of ‘Close to the Water’s Edge’, a Harvard student spending his birthday at his millionaire stepfather’s apartment. Set on the Texas coast ‘Close to the Water’s Edge’ represents the only tonal misstep in the collection. Despite the display of Keegan’s usual poetic precision, the story seems out of place in a collection so resolutely Irish. A brief piece too, by the time we have adjusted to the American idiom and setting it is over, and we are immediately plunged into the 1940s Ireland of ‘Surrender’.

‘Surrender’ derives from John McGahern’s recollection of his father telling him how, before getting married, he brought two dozen oranges to a park bench and ate them in a row. Keegan recasts the senior McGahern as The Sergeant, a belligerent Garda officer and veteran of the independence struggle. None of his colleagues can compare with the men whom The Sergeant fought alongside against the British, and the dissatisfaction created by this infects every aspect of his life. Again, Keegan’s understanding of character results in a story where tiny, oblique moments are imbued with considerable meaning. The Sergeant, for example, derives a kind of mechanical comfort from inspecting his bicycle, a comfort which eventually replaces emotional engagement altogether. He must resist the urge to wind the chain until it seizes: the psychology of a man who can only give all or nothing, and can find no comfort on any middle-ground. His unwillingness to commit to a relationship is another facet of this, and the true fulcrum on which the story turns. Keegan’s ‘Surrender’ is more than a simple derivative of McGahern’s anecdote; it is a worthy and beautiful piece of art in itself, and one which speaks volumes in its silences alone.

In that respect, ‘Surrender’ compliments ‘Night of the Quicken Trees’, the final story of the collection, which also undertakes an exploration of the Irish unwillingness to commit or communicate. An endearing romance of a kind, ‘Night of the Quicken Trees’ traces the tentative relationship between Margaret, a healer, and Stack, a bedraggled turf-man with no one but Josephine, his goat, for company. The story amalgamates many of the collection’s previous archetypes—the fallen priest, the dishevelled farmer, the gossipy locals—into a single narrative, and our existing familiarity with these figures allows the tale’s supernatural aspects to be more readily accepted.

The de facto thematic culmination of the collection, ‘Night of the Quicken Trees’ utilises the traditional ultra-rural depiction of the west to symbolise the retreat of wonder from the onslaught of modernity in an eloquent and damning summation of contemporary culture. Just like Synge a century earlier, Margaret is forced to flee across the sea to Aran, and there take refuge from her curses and her gifts. That she takes leave of her life across blue water cannot be a coincidence, as the pervasive melancholy of blue is everywhere in this book. It appears not just in the title and the title story, but throughout, in blue flames, blue evenings, blue skies shedding rain, and a stand of wet Douglas firs ‘almost blue’. There are even blue hydrangeas, symbol of heartfelt sincerity, which sanctify the salesman who visits the lovelorn wife in ‘The Forester’s Daughter’. Yet, while this tinted sadness is pervasive, it is by no means unanswered. Small, hopeful restorations spark against the sadness of Walk the Blue Fields, and Keegan’s occasional reminders of the good that people do serve to make her characters’ disappointments all the more emotive. Truly this is a great collection. Let it break your heart.

sleeping with an atheist

The Pervert’s Guide To Modern Fiction, by Mrs Pimple