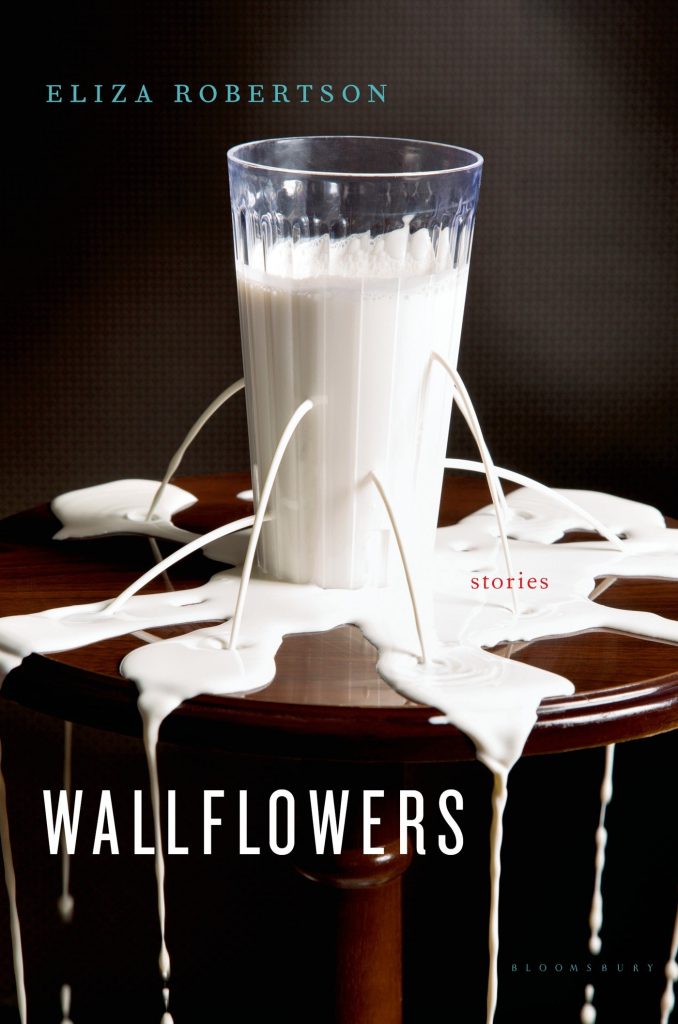 There is a great quote on the Thresholds story site from the writer and critic Bidisha about the short story, in which she says ‘a short story need not be short or tell a story’. She goes on to say: ‘It can take any shape, be in any voice, lend itself to any genre or setting… It can be driven by energy, by personality, by atmosphere, by polished prose, by structure, by sinister concision or expansive comedy. It can be like a compressed Greek tragedy, a passing bubble of Noel Cowardly banter, a family saga or house-history.’ In other words, the short story can be anything at all and this is clearly a maxim Eliza Robertson lives by in her work.

Her début collection Wallflowers contains a cornucopia of original, lyrical stories, obsessed as much with form-bending as with her themes of grief, the importance and beauty of the natural world, and frail, fading relationships. Robertson likes to experiment: one story in the collection has a reverse timeline, another consists of a one-sided correspondence from sister to brother. There are straight narratives, too, but even these have the skew-eyed, individualistic vision this writer excels at—stories are told at a distance and with a trademark aloofness and a pseudo-naivety to the characters that enhances the storytelling as much as the atmosphere. The stories pull the reader along on a rope of strange, unravelling knots: there is the main story and then there are back stories that are painted in detail equally as forensic and arresting. Minor characters have quirks as frequently as main ones: they play Russian roulette, they harness hummingbirds, they use their bodies to make better lives for their daughters.

Robinson—a Canadian—won the Commonwealth Short Story Prize in 2013 and studied creative writing and political science at the University of Victoria in her home country, before graduating with a Masters in Creative Writing from the University of East Anglia in 2012, where she is currently pursuing a PhD. Her gifts are many but her attention to tiny, obscure, fascinating detail is what makes these stories rich and compelling She is very knowledgeable about plant life, in particular, but there are also hummingbirds, slugs and ants in this book which serve as recurring motifs. She describes everything from a ‘fat algae-coloured’ tiger’s eye to turning leaves (‘they looked dipped in ketchup’) in intricate, fresh prose. Her dexterity with language is a wonder.

Many of the stories deal with absence and grief: there is death, mourning and the gaps left—most especially—by missing fathers. In the stylish, poignant and tragic ‘Ship’s Log’ a boy is digging to China in his grandmother’s garden. The story is told in the form of a childish log and details the recent death of the boy’s grandfather and his nan’s inability to cope with either her grief or the child. ‘There be Dragons’ is a moving, deftly written elegy for a dead fiancée by her map-maker boyfriend who finds solace in jobs that takes him to Portugal, Africa and Russia. He sees his beloved in every other woman he encounters: ‘At the café on Rua Garrett, you are the woman who serves me sardines… Like you she wears black curls thick enough to catch bees… In the Winter Palace you are Elizabeth Petrovna… jaunty in a tricorn hat and riding coat, avocado green… At Vlad’s Vodka House you are the emaciated barmaid who calls herself a countess.’

While Robertson is excellent on unsentimental grief, she is also genuinely witty. The story ‘Roadnotes’ is told in the form of letters from Sid to her brother Spencer. Sid has ostensibly packed in her librarian’s job to go on a road-trip and ‘pursue autumn’. In reality she is pursuing her dead artist mother’s only surviving painting, a self-portrait, and trying to make sense of a blighted childhood. The mother—a great beauty—had mental health issues. ‘On the drive to New Hampshire I tried to pinpoint the rupture of Mom’s sanity. I couldn’t. I think this means either A. she was born a lunatic, or B. wrongly committed. I lean toward A. Thoughts?’ Sid then compiles a list of possible reasons the mother was born mad which include ‘…at the Texas  Snake Farm… she threatened to kill herself with an asp.’ The mother’s Cleopatra complex includes bathing in milk too. She also used to squirrel away Sid and Spencer’s prize possessions and hide them in the boot of her car. Sid, driving her mother’s roadster, discovers their belongings, including a pair of ‘pearl-coloured, full-quill, ostrich skin, Tony Lama’ cowboy boots won in a poetry contest. ‘The bitch stole my boots! … Do you think it’s naïve to believe her theft of our treasured childhood items implies a maternal sentimentality?’ she writes to Spencer. There is a glorious dénouement involving the boots, but that is best left to the reader.

The tragi-comic ‘Missing Tiger, Camels Found Alive’ finds Rickie, a loquacious cleaner at a university, aiming high to ensnare Blanche, the girlfriend of a postgrad golf star. In what is another road-trip story, Rickie kidnaps a tiger and a camel and the burden of these animals affects the burgeoning love between him and the pregnant former Miss Mississauga. Again Robertson’s descriptive powers are second to none—she strikes this reader as an Annie Proulx in the making. Rickie describes the stolen camel: ‘His face is like how children draw cats—anchor-shaped grin dropped from triangular nose. I think he’s laughing at me.’

Robertson’s stories are often puzzle-like—the reader is plunged into the middle of realised lives that are presented in opaque ways. And she is a stylist, so the language is dense and inventive. Will every reader want to do the work of engaging deeply and perhaps having to re-read whole passages to get to grips with the action? Maybe not. But the reader who does will be hugely rewarded. Guaranteed.