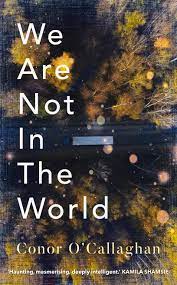 We are not in the world exactly. This is more the future we return to, its municipal spaces derelict or in some limbo of sublime incompletion. Nobody remembers us. There’s nobody to remember. All old comrades, the ancient order, have fallen from memory into myth. The saddle is sliding off. We’re sliding off with it and can’t stop time happening.

The title of Conor O’Callaghan’s second novel—the follow-up to 2016’s remarkable Nothing on Earth—is taken from Arthur Rimbaud’s Une Saison en Enfer (A Season in Hell): ‘La vraie vie est absente. Nous ne sommes pas au monde.’ The true life is absent. We are not in the world. The book documents its protagonist’s very own season in hell, as he travels from England to France in a borrowed lorry to make an unspecified delivery. The cargo is inconsequential. Really, Paddy is looking for something to do, something to keep his mind occupied as the ground slips from beneath his feet. His marriage dissolved some time ago, and now so has his affair with a married woman. It emerges that he’s also grieving the loss of his mother. But it’s difficult, at least initially, to attribute his general malaise to any one thing in particular, to sense the edges of his sorrow. We catch only glimpses of Paddy’s past, approaching and vanishing like the roadside landmarks that whip by in his peripheral vision.

Along for the ride is his twenty-something daughter, whose own problems come into focus as the novel progresses. Shaven-headed and Doc Marten-clad, she effects a pose of adolescent cynicism, world-weariness (‘Wrapped in vintage duds, she inhabits the world by hiding from it’). This odd couple falls into a sort of buddy comedy routine, trading quips about the characters they encounter on the road, poking fun at one another. O’Callaghan introduces elements from several different genres: folklore, romance (will Paddy rekindle things with his old flame?), even a dash of the thriller (where is the lorry headed, and what is it carrying?), but at the heart of the novel is this relationship between father and daughter. The reader must wonder why she has chosen to join her father on the trip, why it is she’s participating in this indefinite hiatus from ordinary life.

As Philip Larkin once declared, ‘Man hands on misery to man. / It deepens like a coastal shelf’, and something of that sentiment finds voice here. Misery is catching; it accumulates, and often threatens to overwhelm. On a drive that is without urgency, seemingly without end, the pair mostly natter aimlessly (‘interminable twaddle’), falling into the conversational rhythms that they have developed over years, over decades: referencing their private jokes, speaking in a language each shares with the other. Sometimes, they cruise along in ‘parallel silences’, left to their own thoughts, their own troubles. They drive, they take breaks at service stations and dingy roadside eateries, they drift apart, they reconnect. Town after town that looks exactly the same as the last: ‘Same nothing spaces […] Same caffs, same staff, same drab grub. Same sun even, same dome of unblemished friggin azure over our heads’, and no one but each other, nothing to do but talk, and, incrementally, to address what’s brought them here.

Alternating chapters are written from the perspective of Paddy’s (now former) lover, recounting their affair—its thrilling beginnings, its slow collapse—and offer a different perspective than his on the years which the book takes as its focus. (‘So much of love is how another sees you,’ she notes.) Sometimes, in these recollections, Paddy assumes a new identity—the identity used to explain his presence to his lover’s young boy: ‘Once upon a time there was a giant. The giant lived in the caravan at the bottom of the garden. How the giant got there, when or where the giant went, nobody can be certain.’ The boundary between fact and fiction blurs. Yet gradually, through sporadic admissions, we begin to piece together a narrative: ‘Every togetherness would arrive at this point, him asking you where things stood. He tried to play it cool, but his pain was palpable with every asking. You knew before you arrived that your visit would get to this. You had even caught yourself rehearsing lines in the terminal earlier.’

Like much of O’Callaghan’s poetry, We Are Not in the World works by restraint and suggestion. It is a thoroughly well-made novel, flitting between lyrical descriptive passages, profound aphorisms, and sometimes halting, stuttering, splintered speech. Reading it, I was reminded of a stanza from ‘In Memory of the Recent Past’, a poem from O’Callaghan’s fifth collection, Live Streaming (2017):

if antiquity is
an elevation in silhouette
on the horizon,
and what we pause on
as one might a scenic overlook at evening
is present,
then past must form
the vale that falls between
in grades of recentness,
Most recent is nearest.
Too near to see,
it recedes from us as noise.
We hear it.

In some ways, We Are Not in the World is a book about the process of coming to see—coming to understand—the recent past, and, to redirect a phrase from Joan Didion, the stories we tell ourselves in order to live. But it is also a book about making sense of childhood, about trying to imagine a future, about time itself. No mean feat, this, to take on the theme of ‘time’, but O’Callaghan does it here with staggering results. The myth of Tír na nÓg recurs frequently, that old tale of the land of eternal youth. À la recherche du temps perdu gets a look in, too; Paddy recalls that his complicated, enigmatic mother spent years poring over it in the original (‘It took her most of the eighties to read’). As for the world inside the lorry, it seems to exist almost outside of time. In Beckettian fashion, the truck cab is by turns a kind of womb (a quasi-natal space from which, the reader hopes, these characters might find themselves reborn) and a kind of crypt, as the protagonist tells us later on in the novel.

As in Nothing on Earth, O’Callaghan plays with the unreliability of the narrator, and with the inconsistency of memory. In that earlier book there swells ‘a tide of unmentionables’, and here, too, we find unspeakable truths that must nevertheless be spoken around. Both novels share a propulsive quality, an unresolved mystery at their centres, and both might give rise to a mounting sense of dread in the reader as the writer excavates buried secrets. The supernatural elements of the first novel are largely absent in the second, however—its jarring imagery (a girl with her skin covered in writing; figures only fleetingly glimpsed) replaced by images of the humdrum, the quotidian. And the setting of the ghost estate is replaced by that of the open road: a landscape that, in its vast emptiness, feels paradoxically suffocating. There are little echoes between these works (in each book, for example, the girl-child assumes the name of her mother/ grandmother), but each represents a distinct psychic turmoil.

With January’s news footage of snaking lorry tailbacks and empty supermarket shelves in mind, following Britain’s exit from the European Union, I came to this book expecting something different than I found. I had expected, perhaps, a novel that dealt in a more on-the-nose manner with the politics of trade, the refugee crisis. (Crucially, the book is set in 2015, with scarce reference to imminent political shifts; the most direct reference to these arrives in a single sentence in which one character ‘rambles on about this referendum, the madness of it, how if it happens the whole landscape of continental haulage could change indefinitely and not for any good’.) These concerns ghost the novel, as austerity politics and the housing crisis ghost Nothing on Earth. But while O’Callaghan is sensitive to the gravity of these issues, Paddy is lost to his own reveries. At points We Are Not in the World is acutely sad, almost unbearably tender, but it rewards the reader’s perseverance. By the final lines of A Season in Hell, its speaker hasn’t attained solace, but he has attained a measure of truth, and the same might be said of our journeyman Paddy. O’Callaghan is a writer of rare precision and depth, and this novel is a powerfully affecting, transportive work.

Tara McEvoy recently completed a PhD at Queen's University Belfast. She edits The Tangerine, a Belfast-based magazine of new writing.

The Defeat of Destiny