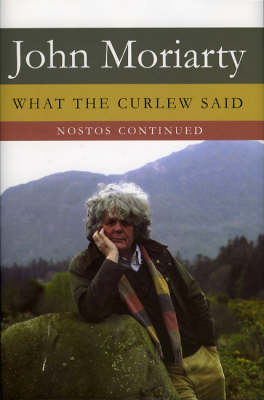 What the Curlew Said

This is not a review. It seems pointless to praise and criticise the wild song of a man on a quest for truth. He climbs the ancient mountain, he follows the rivers, he transforms into a bird, he spends hours in meditation in the wilderness, he descends to the darkest realms of the soul—what is the point in telling him he is often tedious and self -indulgent, incomprehensible and ludicrous? You must believe in him, you must in some sense already yearn for what he is seeking, and in the possibility of the shamanistic journey to bring him there… and back again with what he has seen. At the very least you must worry about the questions he is hellbent on answering for himself, and as he would have it, on our behalf. Questions about the existence of the soul, about the sacred and the numinous, about the health of the psyche of this island and if it has been fatally wounded or waits to be healed.

The book is the second part of an autobiography, a spiritual autobiography in the line of St Augustine or John Bunyan or the Marquis de Sade. It is a slow discursive cranky argument against a scientific worldview which seeks only to measure and control the world. Unless we turn back inside ourselves and find a new way of being human and being Christian and living within nature, we are headed for disaster. Watching a heron one day, Moriarty imagines ‘seeing, pure seeing, seeing unburdened by being. Seeing unsullied by somebody seeing.’ There is nothing new or original in these thoughts, these soul-longings. Not even the diverse range of quotations can lift the thoughts into the exhilarating. No amount of playing around with what if’s— what might have happened if Darwin had read Sufism or Inuit shamen on the Beagle voyage?—manages to create the sense of a great thinker in full flight, on heron’s wings.

But what I do find extraordinary and as satisfying as any Host is the way Moriarty goes about telling us about his spiritual voyage. Much more than a description of the mioments of world insight and transubstantiation, the book is like an attempt to re-enact these moments, to bring his reader—his disciple, his adept, his apprentice— down the road with him. You must believe and try to experience these illuminations with him, perhaps even use some of the passages as prayer and invocation.

The book circles forward in surges of images and thought towards moments of revelation—or what are meant to feel like revelations. The language is driven by tides of truth and doubt. There is no irony to hold on to when the waters rise. He is often carried away. He overflows. Sometimes he seems to ejaculate: ‘Jesuleviathasayn./ Apophis Maria.’ He goes as far to rename the earth BUDDH GAIA.

Yes, the phallus is a recurring image in the book. Moriarty says that for a long time he sympathised so deeply with the Fisher King that he came close to ‘being myself similarly stigmatised.’ He too must ‘refrain from generation.’ In a dream, he is walking the upper lake at Glendalough in the company of two friends, a man and a woman, when he starts to worry that ‘something outlandishly shameful’ is happening—a sword is falling out of his phallus and he is terrified they will see. Despite his best efforts, the sword falls and hits the ground noisily for all the world to hear—’clangs clangs clangs.’ He is humiliated. The next day he phones the woman in the dream and tells her the story. What does she do? She meditates… and travels back to the lake where she finds the sword. With both hands, she holds it up to the heavens and prays ‘it will never afflict anyone as it has afflicted me.’ The heavens open and a ray of lights shoots down and dissolves the spear. It’s not clear what the nature of this great affliction is. Sex, sexuality, desire, procreation? He mentions a woman he wanted to marry but never did. You would be wasting your time reading this book to find out about Moriarty’s private life.

The phallus figures—hugely—again in Moriarty’s obsession with Melville’s Moby Dick, ‘the best diagnosis and prognosis we have of the Western adventure in culture.’ Ahab sails out on the Pequod to hunt the white whale that bit away his leg. We live now in Pequod culture, Moriarty tells us. We are bent on trying to murder the sacred god. Moriarty then quotes at length a scene from Moby Dick where the whale’s penis— the grandissimus—is sliced and turned inside out, hung up to dry and then worn like a coat by the mincer, ‘who stands before you in the full canonicals of his calling.’

Like the slaughter of the Minatour, Morairty believes this is a fundamental transgression, ‘ and this isn’t the first time we have so utterly and perversely violated the generative and regenerative power of Nature’

Who can heal this violation then? A central section of the book deals with Moriarty’s return to Canada where he taught literature for many years. His students clubbed together to fly him back but he has another agenda. He wants to re-stage the sacred Horse Dance of the Lakota Indian, the world-redeeming drama, in the hope of undoing the damage. He isn’t joking. To go beyond rational thought, beyond cerebration, will be the ultimate scientific method. Christianity must leave Alexandria and Chalcedon and reintegrate itself into nature—’it must go bush.’ On the plane over he reads Black Elk Speaks and worries that being up in the air in a jumbo will muddy his soul. The reader hears very little about the students waiting on him. Moriarty prefers to talk about the intense cold and the snow or a silver branch out the window. A Native American drives him to the Tongue River, the ancient site of the horse dance, a man in excruciating pain with a gallstone. They pull into a truck stop and Moriatry watches a huge truck sliding into a tight space. The driver’s door opens and down jumps ‘a slip of a girl’ and off Moriarty goes on one of his free-form intuitive exuberances: ‘I couldn’t imagine a world in which she wouldn’t look orphaned. In Eden before the Fall she would be an orphan… And yet so sure of herself was she, you would think looking at her that, as though it was her truck, she will one day manoeuvre America back into sanity. Europe she could manoeuvre. Asia of the Upanishads, the sutras and Tao Te Ching she could manoeuvre… the slip of a girl who, looking at us in her rear-view mirror, could back humanity into its proper place in Nature.’

This is Moriarty in action. Alert and sensitive to the premonitory signs en route to a sacred and dangerous re-enactment on the Tongue river or a wild man reading too much into things… into clouds over a mountain, into badgers, the shit of a pine marten, a heron flying over him as he cycles home, a mass in Dublin, children on a train, the shadows on a river. Reading him is like talking to an inquisitive child. You can either fluff the answers or speak as honestly as you can. Who was Christ? Are you a Christian? Who is good? What happens when you die? Must we do more to save the planet than recycling? Do dreams have a message? Have the stories of the past any value for us now, as we joyride down the motorway in a holy juggernaut we have stolen from a wisp of girl while she was eating her dinner.

Moriarty says, ‘The time of fighting foreigners is over. Time now to fight ourselves.’ Is the Bible or Buddha or The Midnight Court any help to us right now? Do we want any help? The original inhabitants of this country who fled underground, our supernatural, have locked the doors and refuse to come out again to the sickness of the world. Unless… unless… Or is this a desperately nostalgic world view, a dodgy pan-ethnic mush of Jesus and Black Elk, Buddhism and Hinduism—has it any value nowadays when science and technology have usurped the traditional questions of classical philosophy… and the Image expands every day to include every experience?

Is this mighty progress of ours a journey towards perfecting the tools that will free us from this endless gestation of the soul?

To be born again.
As One.
Done for good in the Bright All One.
Or is it the desert we crave
One vast black desert
The last fire long dead.
Long forgotten.
All forgotten.
In a cold hovel bed
He sweats and sees Eros
Fall for Thanatos
Who starts to cut her up
With the pious tip of an eagle’s feather.

A Sin To Tell The Naked Truth