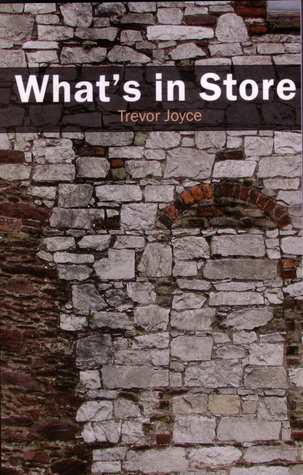 When a twenty-year-old Trevor Joyce, through the magazine The Lace Curtain and The New Writers Press, began writing and encouraging others of like mind to publish and write in the late 1960s, it was with the express intention of launching open cultural warfare on the inbred, oppressive conservatism and idiotic rural religiosity that dominated Irish life and letters at that time.

Much of the work of the NWP lay in reviving and continuing the modernist tradition set in motion by Beckett, Coffey, MacGreevy et al in the 1930s. However their extensive, even populist, list also contained such important writers and candidates for a backwoods lynching by the Legion of Mary as the communist Patrick Galvin, and the pagan visionary Michael Hartnett.

In these more open-minded days we have, gladly, come to expect rebelliousness and eccentricity as a characteristic of our poets. But things were a whole lot darker when Joyce began to kick against the priests and pricks. It is, at least in part, down to the efforts of him and comrades-in-pens like Michael and Irene Smith that we have such freedom to express ourselves today.

Forty years on and Joyce continues to embed polemic and front line cultural activism within his own writing practice. Much of the poems in the 300-page What’s in Store, a strange cascade of poetic masques and voices written between 2000 and 2007, are culled from the long-running collaborative hypertext project known as offsets, available on Joyce’s website at www.soundeye.org. His annual Soundeye Festival is one of the world’s pre-eminent gatherings of avant-garde writers and critics. This year it was, for example, graced by the presence of Kenneth Smith, the founder of ubuweb.com, one of the web’s most valuable artistic resources.

By working against the expected and the known, the experimental artist seeks to evade and subvert the restrictions imposed on her art by tradition and its handmaiden, the market. John Cage wrote that experiment in art simply means a process in which the outcome is unknown. In poetry, this means writing outside the pre-established formula of the brief, heartfelt, epiphanic, consolatory personal lyric, the pre-eminence of which is due in no small part to the publishing industry’s growing appetite for anthology poems, and for collections unified by a brand-worthy lyric voice. In What’s In Store Joyce rebels against these formulas, staking a claim for a free poetry.

Of course Irish poetry is currently graced by many and various voices that can lay claim to being experimental in one form or another. But where Joyce is distinguished is in the combination of chameleonism and strict impersonality in his work. The ‘I’ is sometimes uttered, but it is always at a remove from the poet himself, belonging to a nebulous folk collectivity, or to various eerie and disembodied cultic or bureaucratic figures who seem to speak to us from a world both terrifyingly alien and certainly our own.

Instead of presenting us with a series of his personal insights and visions in the conventional way, Joyce gives tongue to voices ranging across centuries, cultures, poetic genres and linguistic registers. These range from the brief untitled song that opens the book—‘the truth/i dreamed/i craved/sweet fruit’—to works requiring far more readerly effort, such as the ten-page unpunctuated poem in block capitals, ‘Stillsman’.

Most of our major poets do work to develop a single distinct individual style and voice, a vehicle to express their personal way of seeing and expressing the world they inhabit and engage with. Even when they work in translation or with masques, we understand that the lines are being uttered by a recognisable individual voice; Brendan Kennelly, for example, writes as Cromwell or Judas. The uttered words always belong to someone we may imagine or know, someone with a posited existence outside the words themselves. The lines are supposed to indicate the truth of the utterer’s feelings, intentions and beliefs. In contrast, Joyce’s pieces have no locatable outside referent. We never know who, exactly, is supposed to be speaking. No face can ever be put to them.

Of course it is amorphous, never-settling language itself that is speaking through Joyce. All the time our attention is being drawn to the slipperiness of words, to how untrustworthy they are.

There’s a radical political subtext to this linguistic open-endedness, rooted in a healthy suspicion of the nature and uses of language. Joyce’s sentences throb with connotation, but they rarely leave themselves open to a single paraphrasable meaning. Though often dressed in the language of the guide or the instruction manual, they offer no reliable mapping or interpretation of the world we inhabit.

Evasion rather than revelation is the strategem. Joyce is not confessing. In the vein of the great modernist radicals and experimenters, he continuously draws our attention to the exteriority and materiality of language, to our alienation and estrangement from the words we use. Indeed, his work often seems to address a part of us which is sub- or supra-lingual. It is as if he is using language to alert some secret, inchoate, inexpressible, perhaps innocent part of us to the failure of language, to the iniquity of words and their complicity with the evil that orders the world.

Joyce’s skill as a curator means that his widely diverging tongues mingle, clarify, contextualise, confirm, contradict, argue, agree, and play with each other in an interactive and not merely cacophonous way. Much of the invigorating experience of reading Joyce derives from the white spaces between stanzas and poems, analogous to John Cage’s musical silences in which the listener completes the music between notes. In these white silences the reader’s imagination, triggered by the pulsating suggestiveness of the poems, gradually learns to begin contributing to the generation of meaning from the texts and to listen in and attempt to interpret the echoing conversations taking place between them.

Shockingly for anyone who would rather portray the avant-garde as unreadable, irrelevant and mad, the bulk of What’s in Store is not only reader-friendly, but absorbingly—if often disturbingly—stimulating to boot. The haunting elegies from the Finno-Hungric which open the book, and the crystal clear translations from the ancient Chinese, are accessible to all.

Moreover, the Beckettian thematics of doom and looming, inevitable disaster that pervade the work, speak directly and affectively to the central anxieties of our time.

Some may, at first, find a good portion of What’s in Store difficult. But modernist difficulty is a way of forcing us to recognise that our perceptual capacities have been, and are being, numbed and eroded by a culture which values instruction over invention, domination over interaction, hierarchical division and exploitation over equality and co-operation. Joyce alerts us to our damaged, endangered, semi-wakeful state, urging us through the interactive and novel nature of his work to find our own way of waking up and engaging with the language that shapes and mediates our relation to and understanding of the world. In this he remains as revolutionary as he ever was, and the Irish poet who is the least cynical, and the most concerned and humanistic of them all.