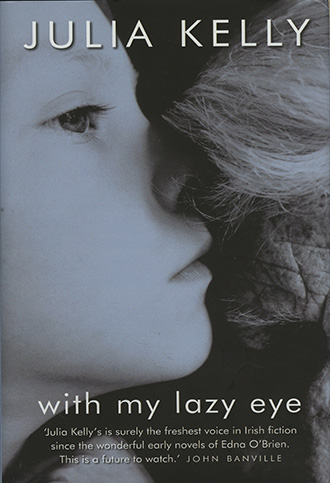 With My Lazy Eye

Debut novelist Julia Kelly spent her formative years in the seventies and eighties and it is her experiences then and her relationship with her father that appear to form the basis for With My Lazy Eye. Brought up on the Ailesbury Road in Dublin 4, Kelly is the daughter of the late Fine Gael politician and Attorney General John Kelly. She says he was a strict father whom she sought to impress. In her novel, lead character Lucy ‘Bunty’ Bastonme longs to impress her hardworking, strict father whom she progressively grows more distant from. And the author as well as the main character spent early adulthood working in London. All of which begs the question, why wasn’t this book written as a memoir?

Written in first-person narrative, the novel begins in the late seventies as Bunty is making the transition from child to teenager. In a diary-esque, episodic manner, we meet Bunty’s family, best friend Patsy and her teacher Billie whom she has a crush on. Vivid from the first page, it’s as though the reader is sitting next to Bunty throughout. From watching The Muppet Show in the play room to picnicking in the Phoenix Park for the Pope’s visit in 1979, the reader is transported into Bunty’s life and this will resonate more with anyone who grew up during the same period. However, three chapters in, it still feels as though we’re waiting for the novel to begin. There is no clear plot —we are simply viewing ‘snapshots’ from Bunty’s early life.

At this point, it is easy to dislike the main character; her myopia (both her poor vision and her inability to see direction in her life) is a little self-indulgent. While her family are up at the front in the Phoenix Park for the Pope’s visit because her father is ‘a VIP,’ she still finds time to complain about the quality of picnic food pointing to a near-perfect family nearby who appear to be dining in style; ‘The sandwiches in the lunchbox weren’t in the wrapper from the sliced pan: they were shaped like little triangles and covered in cling film.’

Moving quickly through to teenage-hood Bunty finds her eyesight and her direction veering further off course. The glimpses that we get of Bunty’s dad are of a man who works non-stop. He drinks, has affairs and, from Bunty’s point of view, places her low down on his list of priorities.

In his efforts to push Bunty in school, he sends her to Germany on a student exchange in the hope that it will improve her grasp of the language which she finds excruciating. She’s just not academically driven; she wants to be a tennis star, a famous musician or even Alison Hampton. This is her flawless next door neighbour who is everything that Bunty is not: pretty, smart, sporty. Full of self-loathing, Bunty watches from her bedroom window or over the garden fence, coveting Alison’s life not least her easy relationship with her father.

Bunty secures a place in Maynooth University more to placate her father than anything else, but she still daydreams constantly. And from here she embarks on an illicit sexual voyage with a myriad of unsuitable men: ‘And then there was Valentine. No after Skello there was that doorman from The Bailey, and then there was Valentine.’ She is seeking, perhaps, the male attention that her father has so far failed to provide.

The best part of the novel by far is the time that Bunty spends in London with best pal Patsy. Here she is clearly enjoying her freedom and she gets a job she loves at a travel guide company, Roads less Travelled . This section of the novel also reads more like a story than the earlier episodes. And although the narrator wallows in self-pity throughout the book, we have still been pulled in enough by Kelly’s writing to feel for her when she loses her job. While in London Bunty also discovers something of her father’s past, how he wanted to be a poet when he was her age and her attitude towards him begins to shift—she begins to see that he isn’t so different from her after all.

This is an imaginative novel but it does feel like a memoir. Kelly’s fresh narrative voice is the best thing about it—the emotive passages are wonderful; ‘Frankie told me he couldn’t come—something about not having a dress suit to wear. I imagined myself into the painting of the storm, howling, inconsolable. My taffeta dress hung in readiness on my wardrobe door.’

The lack of dialogue, however, is an indication of the immaturity of the writer; unfortunately With My Lazy Eye reads like a first novel. And, it feels as though we never really get to know all the characters in the story. The only two clear-cut characters are Bunty and her father; her mother, her siblings and Patsy are mere shadows in the background. Kelly’s writing style also needs polishing, there are details which are needlessly exaggerated—‘He’d had a heart attack at the breakfast table one morning, had slumped into his bowl of cereal and drowned’—why not just a heart attack? But with some fine-tuning and a more layered story, Kelly could well write a fantastic second novel.

How Do We Know What We Know?