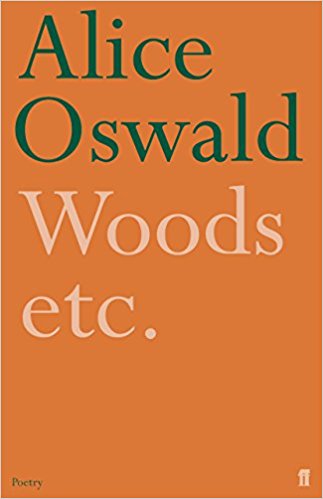 Woods etc. / And then Something Happened

I expected these books to posit two quite different versions of what a poem is. On the basis of her early publications in magazines and in book form, Alice Oswald might have been characterised as that rare thing among younger writers, a pure lyric poet. Her second book, Dart, however, was an extended sequence, using the words and aspirations of people from along the Dart river and became a kind of ‘Wasteland’ for the area from Dartmoor to the sea. Interspersed with the ‘voice’ poems are more formal pieces written with her own distinct music. Her third book, Woods etc. begins with echoes of that music. These poems take off from images of the natural world into lyrics where sometimes sound itself is the reason for writing, as in ‘Song of a Stone’. There are also pieces of a more discursive metaphysical concern such as ‘A Winged Seed’ which begins ‘I was bewildered / at dawn when the rain ends’.

When the poet risks speaking in the ‘voice’ of crowds of seabirds, you might fear for the result but ‘Seabird’s Blessing’ moves with the authority and rhythm of a psalm to an end that’s both surprising and satisfying.

That word, authority, may be a marker of division between the traditional lyric and what is sometimes called the postmodern poem. The former generally communicates with an actual audience which knows how to listen whereas the latter is concerned more with exploration than communication. This newer kind of poem is not going to tell something in an authoritative way, but instead involves the reader within the exploration as the writer’s own presence gives way to an emphasis on the language used and an attention to the process itself.

Oswald is attempting to combine a natural lyric impulse with the challenge of making poems which take account of the modern project. While she uses the elemental images of water, stone, a wood, wind, moon and stars, she can cleverly strip these of the received notions of portent, often with wit, as in ‘Walking past a Rose this June Morning’, which begins ‘is my heart a rose? how unspeakable’ and ends:

Oswald allows a sense of mystery to enter her poems. She refuses to use nature as allegory but seems rather to be listening for echoes of some shared unconscious rhythm that will ‘sing to the brink of speaking’.

In ‘Tree Ghosts’ she writes a ballad with footnotes in which each letter of the alphabet commemorates a cut-down tree and the footnotes turn out to be another poem, a kind of skewed image of the ballad where the expected authoritative voice of the annotator is undermined when every starter-statement takes off into a buzz of language:

Oswald is having fun. She is playing with the traditional ballad as well as writing its modern antidote and is challenging the reader to enjoy both.

Susan M. Schultz is Professor of English at the University of Hawaii and is published in the UK by Salt Publishing, an independent press committed to what’s variously called neonew (Bob Perelman’s word), neo-modernist or broadly experimental poetry. Since every poem is an experiment of sorts, it may be that the terms are not useful, but I did expect that Schultz, editor of The Tribe of John: Ashbery and Contemporary Poetry, might exhibit some of that writer’s playful disruption of reader expectations. Schultz certainly has some Ashberyian traits including a constant questioning of poetics and plenty of wordplay in And then Something Happened. However, as in her first book from Salt, Alleatory Allegories, there is an undertow of the tensions which that title might suggest. If chance is supremely postmodern, and allegory now considered a pre-modern phenomenon, this is poetry that embodies those differences while still being interested in story and meaning.

And then Something Happened is in four sections which combine to become a meandering meditation on themes of childhood, memory and loss. At the same time the pieces are linked by the developing story of the growth into language of a young person. The poems speak freely within themselves of what gave rise to them. In this way, Schultz seems to draw the reader close to the writing impulse, often in a conversational mode.

This author is fully aware that her audience may not have yet learned how to read her. Even if this kind of poetry is on its way into the mainstream, she knows how to remind us to stay vigilant, ‘Consider that the ostensible subject of this paragraph / is not its actual subject, that it has yet to come up, that it might not.’

Part of her subject is precisely the loss of the authoritative self from the poem:

An odd disjunction arises between my old
self—so long at the center of things. . .

and my present one (certainly not new,
just more consistent) who’s losing
contact, nay faith, with and in its past
incarnations.

At times, the interrogation of what a poem can do and the stop-start impulses towards a narrative sit together uneasily for this reader, and even if reader-unease is intended, I have difficulty in warming to it. The poems throughout are peppered with reminders that the political is personal and vice versa. That the act of writing implicates the mind of the reader is often humorously brought into focus as in ‘Vocalissimus’ from the third, and most interesting, section of 42 prose poems entitled ‘Material Lyrics’:

Narrative desire is different
from a desire for narrative. Use the compose
command to complete your message. Composition
and command, what finger on what trigger itches.

It’s the poet’s humour and lightness of touch that in the end wins through the theorising and while many of the ‘lyrics’ have more in common with how deejays splice different songs together, they exert their own insistent rhythms on re-reading. There is much to enjoy:

I suspect transcendent realities are
flat, pressed in a scrapbook awaiting
captions.

The final section, ‘And then Something Happened’, was written in London in autumn, 2002, under the shadow of war. This piece makes use of the language of politicians juxtaposed with that of a child and his stories and songs. And although it continues the poetry of poetics, it manages to be both hard-hitting and poignant, even if its construction of poems interspersed with prose is difficult for this reader to appreciate. I constantly want more music, of the kind that Alice Oswald provides, but Schultz knows exactly who she is talking to:

We can’t get past the reach of the Bureau
of Homeland Security, for this is our
homeland, this wanting to be good
in our skin, at ease with syllables, sounds.

If Alice Oswald’s work is more readily enjoyable, does this mean that I am merely exhibiting the ‘cultural tendencies’ that ensure the commodification of poetry as some critics would have it? Or does it point to the deep satisfaction available in poems where the rhythms of language seem to make the whole piece reverberate longer, resonate larger? If I can also appreciate Susan Schultz’s attempts to engage with the tradition from a wholly different perspective, am I Janus-faced? Both poets seem to be asking what kind of art has purchase now. In their own ways, both are dealing with the tensions between the lyric impulse and the modern disaffected, disillusioned ‘I’. One thing is certain: as they write onwards, these two poets continue to teach us how to constantly read anew.