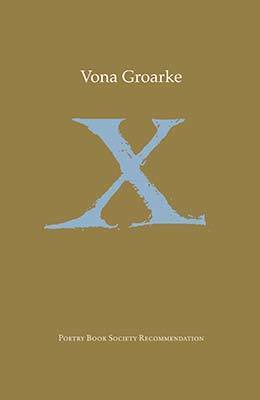 In her latest collection of poetry, X, Vona Groarke throws the word ‘love‘ around with abandon. Anyone trained to cull poems of big unearned abstractions can’t help but scare at the intemperance. Are we suddenly all agreed on what love is? X’s title is the algebraic symbol used to signify unknown quantities, yet one of its poems, ‘The Road‘, relegates love to the category of only too well-known quantities by means of a handful of adjectives:

the way love is: correct, plausible,
willful; awfully sure of itself.

By strewing the name of ‘love‘ with such casual frequency—conjuring it only to pass on from it—X sets love aside. It frees itself to examine what is available to the self above and beyond that measure of a life spent falling in love with, seducing, caring for, keeping or losing another person. X strikes out for the mysterious realm of unfocused desire—‘as if longing could be an end in itself‘— and the even less-well understood realm of desire’s lack, the latter imagined in one glittering poem as a moment in a doorway in a strange city where ‘noirish rain and teeming lives‘ have ‘nothing to do with you,‘

…pronounce themselves
above and beyond any word you care to choose

Of which you are unaccountably innocent.
You could hold out your open hand, let it fill
with what is happening. But you don’t.

An accomplished formalist, Groarke has already proven what she can make with words in poems like ‘An American Jay‘ (Spindrift, 2009) and ‘Flight‘ (Flight, 2002). But in X, more than in earlier collections, formal hijinks are subservient to negotiating with the world, to figuring out what there is once the business of marrying, making a home and raising a family concludes or is cut short. The poems let loose little firecrackers of appalling emotion—betrayal, loneliness, unrequited lust—then work hard to move past these wormy horrors. The destination we’re after here, it seems, is pleasure in middle age. The heart, in these poems, might learn ‘to accept itself as autumnal‘ and earn the capacity to ‘sit out weather people fret about‘. And X does mine middle age for its real advantages: its earned intuition of the long length of a lifespan; its faith in the resilience earned through habit; its intensified pleasure in the sheerly sensual; its lessening reliance on witness. To describe Groarke’s collection in the terms of such a journey risks making it sound like some kind of prolonged, lyrical, talkshow whoop of, ‘You go, girl!‘ But X’s comforts are slow-won and unreliable to the last, though admittedly an exhilarated opening-up to the universe is its most gorgeous note:

to observe the fields of an afternoon,
the way they chase each other down
in the kind of blue that learned abstraction
moons ago, how they resolve themselves
into a love poem for no one in particular,
written to be open, for the sake of openness,
this night and every budding night inside.

Groarke’s poetry has always been stubbornly concerned with the domestic and intimate. Even when she wrote about the 1916 Rising, it was to imagine the food consumed in the course of the siege, the dreams of the new republic rendered in the form of an ambitious kitchen (‘Imperial Measure‘, Flight). Throughout her career, she has seemed almost improperly fascinated with the house as a metaphor, and indeed with the house as house, pushing the domestic space as theme and figure to what one would have presumed to be exhaustion (and possibly exhausting some readers) in her second collection, Other People’s Houses (1999). In X she somehow finds new things to say about the architecture of the domestic space and how we live in it; and in particular, she turns her eye on the back garden. Groarke’s garden is a record of the years, the tulips in it alluding to tulips past:

Her garden is a negotiation between what the individual has been able to choose or control and what has been allotted to her: ‘the azalea I earthed / and the rowan I did not‘. It is one response to the questions posed in the volume’s opening poem, questions about whether self-sufficiency might equate to pointlessness. Is a life spent building a life the waste of a life? A garden exists for the sake of itself, and it matters deeply, for the breadth and the width of a garden. But Groarke’s garden is also a landscape which experiences no particular love or rancour towards us, which bears our traces but cannot be expected to keep faith with those traces: ‘soil / behind sleepers // will eventually rise to it / and all my scheme and wager / come undone‘. It belies attempts elsewhere in the volume to attribute some measure of consciousness to things and places in order that we might not feel so alone in the world. If, in ‘The White Year‘, ‘two bridges on the same river / will have knowledge of each other,‘ (an assertion which is plainly true in some good sense), in ‘The Garden as Music and Silence‘, it’s only the poet who is given to ‘imagine‘ that ‘the blue of cornflowers / has knowledge / of gothic windows / and tapestried plainsong‘.

It is right and proper that an honest poetic investigation of this nature should contain turnings-back, contradictions, uncertain gestures and a measure of what Derek Mahon called ‘solving ambiguities‘—and X does. But some of its mysteries seem less forgivable than others. A question like ‘[w]hat colour / is the colour of where / the last moon used to be?‘ feels like false profundity. The assertion that

It should be easy to say
the garden speaks
with the silver of wood
left out over winter
in all weathers.

But it is not.

is smoke and mirrors. But it’s hard to take Groarke much to task for these moments that don’t hit the spot, since it’s exciting to see her striking out beyond the precisions and certainties of her earlier poetry. Perhaps these moments are pitfalls of the laudable task of writing about the very things of which you are most uncertain. Perhaps it’s only right to give a jolt to the reader who trusts you to lead them somewhere solid to sit and think, or somewhere with moving parts that work. X is concerned with the desiring human in a guise—that of the middle-aged woman, alone—often passed over by the simplistic script laid out by our cultural world. With it, Groarke joins those who have escorted Irish poetry to realms where it seemed not so inclined to go, poets like Eavan Boland, Eiléan Ní Chuilleanáin and Medbh McGuckian, who also happen to be women.

And love? Groarke remarks once more on the ‘gold of love‘ in the final lines of her book, writing about a portrait by the Danish painter Vilhelm Hammershoi, with whose subtle and mystery-ridden palette she has much in common. Whether the ‘gold of love‘ is the divine gold of a religious icon, dreaming of heaven, or gaudy and false as gilt, there it is at the end of X’s investigation: ‘not being, maybe never being, / subdued‘ by all that is true apart from it.

[walking by your childhood home]