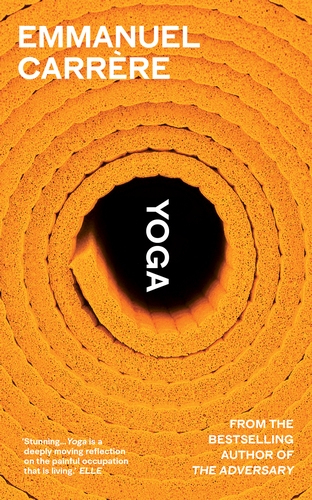 Happy writers are all the same; unhappy writers are each unhappy in their own way. After a decade of self-described happiness, stability, and contentment, Emmanuel Carrère describes in Yoga a period of undoing—an unravelling of that cheerful life and a descent into profound unhappiness, instability, and discontent. He says very little about his erstwhile happiness, beyond acknowledging that he has experienced it: he writes briefly of professional success—respect, fame, wealth—and familial success—his children growing up healthy, a loving and intimate long-term relationship—but swiftly proceeds to the meatier subject of his own mental anguish. And there he dwells. ‘Today, now that my life has gone off the rails, I think back to those mornings at the Café de l’Église with a blend of fondness, incredulity, and bitter irony. I was full of myself. I was happy. I believed it would last.’

As with most of Carrère’s recent and best work, Yoga is a book which narrates its own becoming. Like the Centre Pompidou, the skeleton is on the outside, the evidence of its construction visible and explicit. Carrère returns repeatedly and deprecatingly to the thought which prompted the work in the first place: a desire to write an ‘upbeat, subtle little book on yoga’, a book which might, if things went well, ‘sell like hotcakes’. (It is always like this with Carrère: the thought and its grubby material context, all at once.) Though it contains many long passages on the subjects of yoga and meditation, this book is certainly not the originally envisioned popular guide to mindfulness, and it is neither upbeat nor subtle. It is rather a rambling diary of sorts, a partial record of the author’s struggles with what he eventually learns to call bipolar disorder. This condition gives the book its intellectual structure, provoking as it does an intimate concern with the integration of opposites: fast and slow, manic and depressive, yin and yang, madman and sage. Exploring the relationships between these and other apparently antithetical states is the book’s motivation, and it results in a single question voiced in various ways throughout: is balance possible, or must we bounce more or less uncontrollably between the light and the dark forever?

We begin at a Vipassana yoga retreat in some rural hideaway, about a hundred miles south of Paris. It is a ten-day gathering where each day is spent sitting in silence, meditating, with the occasional guide of a taped guru. Outside of the meditating hours, the participants remain silent, eating basic food and taking the odd walk around the compound. There are no phones, no computers, no media, no contact with the outside world. It is expected that, once you commit, you stay for the duration. ‘I was expecting a lot from these ten days I’d spend cut off from everything, out of contact, beyond reach,’ Carrère writes in his early spirit of optimism. ‘I observed myself waiting, I observed my calm impatience. It was interesting.’

It is difficult to know—as it should be, as it surely was for Carrère himself—how genuine his interest really is. He tells us straight out that he has come to the retreat to have an experience he can write about in his ‘upbeat, subtle little book on yoga’. We know immediately that this retreat is different for him than for the other participants; he is looking to get something more out of it than mere spiritual experience. This places him—as we sense he prefers, because he does it again and again in his work—at some distance from the events in question, trying at once to engage as sincerely and wholeheartedly as possible, while also holding back, observing, recording, hoping for material. ‘The question,’ he writes, ‘is whether there’s an incompatibility, or even a contradiction, between the practice of meditation and my trade, which is to write.’

He describes in great detail the routines of the retreat, the sensation of his mind and body as he sits in position, the food, and particularly the other participants who, though silent and unknown to him, fire his curiosity: one reminds him of an old teacher, which sends him down a sentimental memory lane (‘Tears stream down my cheeks, tears that will never cease, tears that will flow as long as human misery exists… the misery of the poor little Mr. Ribottons who make up 99 percent of humanity…’); two others he imagines becoming embroiled in a passionate homosexual affair that leads them both to abandon the retreat and the practice of yoga altogether (‘Suddenly the simple, raw truth of sex and lust makes a mockery of the spiritualistic pretensions they too took so seriously when they arrived… Isn’t screwing simply truer?’).

He starts to list definitions of meditation—‘as simple, accurate, and all-encompassing as possible’—which he formulates in the course of his thoughts. Meditation is: ‘everything that happens inside you during the time when you’re seated, silent and motionless’; ‘observing the points of contact between what is oneself and what is not oneself’; ‘examining the person you really are, the magma we call an identity’. There are many more.

This quiet retreat is interrupted after just three days, when Carrère is taken at night to a back office at the compound.

We’re behind the scenes, where the masks fall. […] I ask what’s going on, what happened. ‘Don’t worry,’ he told me, ‘it’s no one in your family, no one very close to you. But you should know that in the past few days serious things have happened in our country.’

He learns that there has been a terrorist attack on the offices of Charlie Hebdo in Paris. One of the victims, Bernard Maris, was a friend of Carrère’s. Not a particularly close friend, but someone who was in a relationship with a closer friend, Hélène F, a journalist who works for a ‘wellness’ magazine, we are told. ‘I have to be honest,’ Carrère writes, ‘and I’m sure I’ll be understood: I felt huge relief to learn that it was Bernard who’d died in a terrorist attack and not someone closer, not one of my children.’ This is a typical Carrère admission: not something one would really expect to say out loud, and yet completely understandable; almost shocking at first, but quickly moving through states of lessening discomfort until it arrives at what looks like common sense. Yes, obviously there is relief in such a moment. It’s not fair, it’s not necessarily how we’d choose to feel if we had a choice, but we don’t, and so relief it is.

It’s not exactly correct to say this event ‘triggers’ what follows, but it does seem to represent a break from what has gone before. Now, as it was for the imagined gay lovers, the serenity held out as achievable and desirable by yogic practice is thrown up against the passion, the outrage, the tears, the sheer social force of the quote-unquote real world. And for Carrère it is found lacking: ‘I have the impression that in a toss-up between the blood and tears shed in Paris in those days, Bernard’s brains on the linoleum floors of Charlie Hebdo’s dingy newsroom, and Hélène’s shattered life—to speak here only of the people I know—and our conclave of meditators busy focusing on their nostrils and silently chewing their bulgur and gomashio, one experience is simply truer than the other.’

The rest of the book traces a journey into (and shakily out of) deep depression in the aftermath of these events. Carrère takes us into the Sainte-Anne Psychiatric Hospital, where he was committed for four months in a state of profound stress, anxiety, and three different stages of escalating ‘moral suffering’: significant, intense, and finally, intolerable. When he reaches the final stage, he undergoes electroconvulsive shock therapy. His descriptions of this time are no different to his descriptions of anything else: rambling, sentimental, casual, sincere. The effect—not quite as powerful here as it is in, say, the remarkable final section of Lives Other Than My Own—is that each individual sentence or anecdote or image seems slight in isolation, but the feeling of weight and significance builds over time, breaking like a wave when a section ends. When it all comes apart, the stories and the images remain; ragged and half-drowned in memory, they are ennobled somehow, elevated, stark, and dramatic.

For instance, why do I think so romantically now of the wolf watching Carrère and his ski instructor doing Tai chi on the banks of a lake high in the Rocky Mountains? Why do I think of the Roger Caillois story he recounts from within the psychiatric hospital, and feel so acutely the loss of a dream that seemed real? Why do I understand his horror at realising he had, while recovering from ECT, claimed to a fellow patient to have read Cormac McCarthy when in fact he hadn’t? Why, ultimately, do I care? This book spends several pages dissecting a profile of the author in The New York Times, and it is one of the most moving parts of the book. I don’t hold it against him when he goes to a Greek island (not the Greek island where he has a holiday home, another one) to have some sort of authentic experience with refugee children. I put up with his long and largely inane anecdote about learning to type with more than one finger. Why? Why do I let him away with the kind of bourgeois nonsense, cod-philosophy, and sentimental gushing I would despise in another writer? Carrère, as he usually does, spells it out for us: ‘I know that these memories interest only Anne, the boys, and me, that we’re the only four people in the world whom they can make smile, or cry, but too bad, too bad for you, reader, you’ll have to put up with the fact that authors relate these kinds of things and don’t delete them when they’re rereading what they’ve written, as would only be reasonable, because they’re precious and because one reason to write is also to save them.’ He is like a child, and this rescues him.

It is a peculiar outcome of Carrère’s writing style—which seems so simple and maundering on the surface, so easy to scorn as egotistic, privileged, why should anyone care?—that it nonetheless (or precisely because of this) generates moments (and moments are all one really needs) of such intense emotional acuity, such passionate feeling for the large and most of all the small sufferings of the world, and such admiration for the thankless task of the lowly narcissist writing it all down on the terrace at the Café de l’Église. His pain is, through this oddly charming chattering style, made approachable, relatable, interesting—whatever else he may be, Carrère is always good company. And if Yoga is ultimately a book about writing, which I think it is, then it is a book about how writing is inseparable from the world; a book that knows that to observe things is to change them, that the truth is something other than not lying, that balance may well be possible for some but maybe the endless veering from the light to its inseparable dark, mad to sane, love to despair, is more real and more true. The darkness of this unsubtle, downbeat book, light as it feels in the moment, is in how close its author gets to losing that truth, that reality.

Ian Maleney is a writer from Offaly.

Tale of the Boy & the Horse Head