Of course, the woman did not actually say the word boring and her CV was meant as conversation—but the kind of conversation designed to report the self as interesting, and therefore boring. The long lost father also had a CV, but he had lost it. On that busy street on that busy afternoon when the woman found her long lost father, she felt the invisible ribbon of right place/right time unfurl within her. As her fingers played in the brown wool of his cardigan and she smelled the familiar sourness of his sour tobacco breath, the woman discovered something for which she had no name, and so settled in the end, and with dissatisfaction, on peace.

The woman and her long lost father went for a drink in the basement of a Georgian hotel. They had several drinks, in quick succession, until the conversation became untrivial. Later the woman recalled the long lost father’s eyes as brown, but she could never be sure. He had a face made for winter—sharp chin that balked at razors, skin that pinpricked and flushed. With an uncharacteristic lack of empathy the woman broke off her engagement to her fiancé via text message, expecting him to be happy that she found her long lost father on a busy street on a busy afternoon.

But the long lost father spent too long in the pub talking to men about dogs. In restaurants he ordered food for both of them. He spoke to taxi drivers about sport, pulling correct banknotes from the pocket of his trousers. He lit other people’s cigarettes, ate slowly, showered quickly, read everything and went for walks on his own. The woman wanted to overwhelm a landscape of bland but was afraid of the consequences—the more perfect the moment the more imperfect the aftermath—so when she went to bed with the long lost father they made love in social realism mode —her breasts sliding into her armpits, his erection tentative, warm liquid, dry kisses. That is how these things go.

The long lost father took a job managing an enclave of holiday villas in a picturesque seaside town. On the occasions the woman visited him she spent the time sipping French wine in poorly-heated accommodation. There followed the distemper of nightly phone calls and e-mails that bypassed mood. The woman was sure it was the end, but each time she tried to lose the long lost father a broken toy got stuck in her chest, slapping against her ribs, aching her muscles red. And so, in the end, with his thin towels and plastic bag life, the long lost father was found forever. It is a rare thing, but some symbols refuse to be discarded.

After the long lost father died the woman never married. In later years she lived in an apartment overlooking a park. She particularly liked squirrels and frost. In the mornings the woman made coffee in an expensive coffee maker, looking out at a statue of the long lost father positioned under a tree. The woman paid a large sum to have the statue made and a larger sum to have it erected in the park. She told everyone that the statue was that of an important person. It was damp under the tree—rain-wet branches and poor soil where nothing grew. The long lost father held a cigarette in his hand and gazed at the sky, the smoke from the cigarette merging with the smoke of the sky. The woman was happy. This was how she wanted the long lost father to be—slowed to camera speed, caught forever in two-tone light—something in the composition calling her to a place for which she had no name, and so settled in the end, and with dissatisfaction, on home.

Cathy Sweeney is a writer living in Dublin. She has published short stories in The Stinging Fly, Southword, The Dublin Review, Icarus, Meridian, and in the 2015 anthology Young Irelanders, published by New Island Press.

The Dream That Wakes You Up

A Curl In The Lip 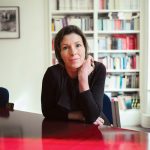 The Rock in the Bog