The Shadow of the Word 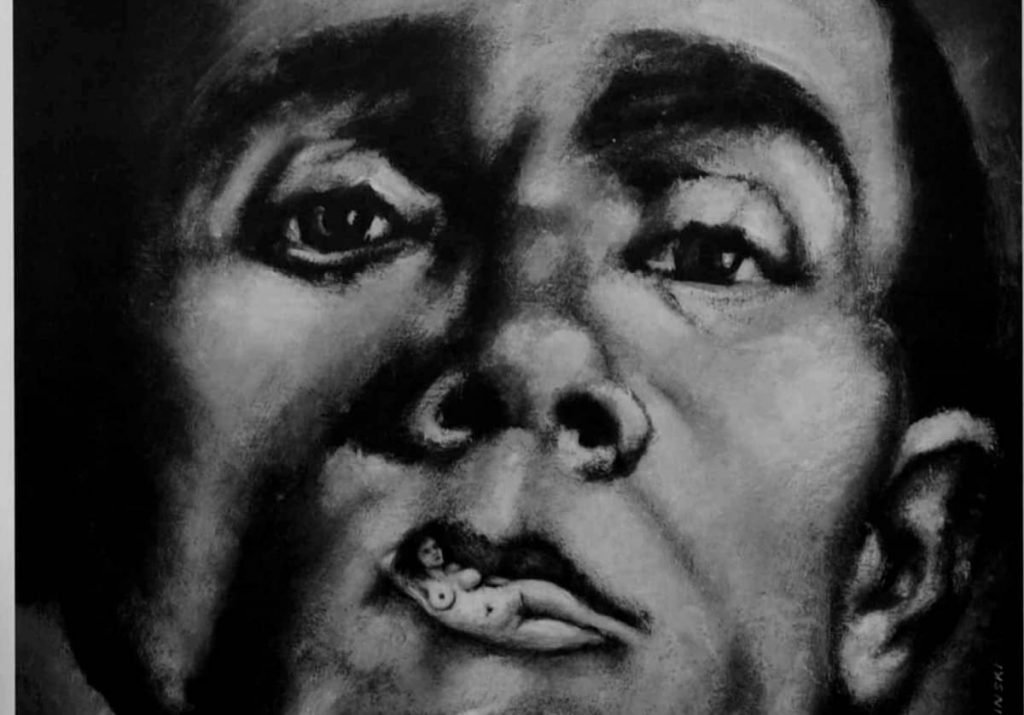 I haven’t written any fiction for a very long time. The factual world is enough. I’ve been learning something about an author of fantastic avant-gardist short stories and sketches called Bruno Schulz, who wrote in Polish in his hometown of Drohobycz (now in Ukraine) in the 1930s. Schulz is sometimes compared to Kafka but his stories, in contrast to those of his contemporary, are locally specific. Drohobycz was an old centre of Ashkenazi culture and in Schulz’s time was also an oil boomtown – the Talmud in the synagogue, Hollywood in the theatre across the road. Asked one time why he was sketching the Hasidim at the local synagogue, Schulz – who was Jewish – replied that he was recording a world that was about to disappear. I doubt this was a premonition of the Holocaust; more likely it was an awareness of modernity, of the passing of a people who believed in the enduring validity of their holy books.

Schulz described the arrival of the modern world to Drohobycz in a dreamlike sketch (it is not quite a story) called ‘The Street of Crocodiles’. This street was the heart of a commercial quarter he describes as inhabited by ‘creatures without character, without background, moral dregs, that inferior species of human beings which is born in such ephemeral communities.’ The Street of Crocodiles is a second rate version of reality; it is what occurs when everything is copied and nothing created. The Street is a cheap trick, paper thin, ‘where one’s wandering proved as sterile and pointless as the excitement produced by a close study of pornographic albums.’ The misfortune of the Street of Crocodiles is that ‘nothing ever succeeds there, nothing can reach a definite conclusion.’ It is, in fact, ‘no more than a fermentation of desires, prematurely aroused and therefore impotent and empty.’

Modernity’s greatest fiction was that something extraordinary, something that had never happened before, was being realised on the stage of history.

In 1941, Drohobycz fell under Nazi German control. Schulz was killed by an SS officer at a street corner in a random shooting spree in 1942. Most of the town’s Jewish inhabitants died by gassing in extermination camps in the same year.

Schulz escaped death for a few months because he was a talented visual artist. Felix Landau, the SS officer in charge of exploiting Jewish labour in Drohobycz, put Schulz to work painting scenes from fairytales by the Brothers Grimm on the walls of his children’s nursery. It is likely that Schulz produced other artwork for Landau; a box with inlay work that turned up after the war in the possession of a member of the Landau family appears to have been done by Schulz. Landau was a cultivated man; he appreciated beautiful things.

He was also, like Schulz, a writer, insofar as he kept a journal, and tried to find time at that end of an exhausting working day to record how he lived and what he saw and felt. He should have destroyed the book after the war, but it seems he mislaid it. Landau was arrested in Stuttgart in 1959 and put on trial the following year, and the journal was sent anonymously by post from Munich to the courthouse. Landau never denied the document’s authenticity. A copy was typed up, but the original manuscript, in the care of the authorities, went missing. I don’t know German, so I had to search out a translation that was made into English in 1987 by the Institute of Documentation in Israel for the Investigation of Nazi War Crimes, in Haifa. (You can’t get everything on the internet, as it turns out.) The nearest copy to me was in the Bayerische Staatsbibliotek.

I registered with the library ahead of time and reserved my book, so that I could access it in the reading room on the day I went in. And it was a strange feeling, now that so much information is virtual, to enter the library on a morning in late October and to be sent to Shelf 95/Blue and to find the volume waiting for me, a card with my name printed on it poking out between the leaves. It looked like a large-format diary with a plain cover of the kind you might pick up in a shop for office supplies. I stood there for some time, holding this document. It was a sheaf of bound photocopied pages. The original had been a typescript, complete with typos and handwritten corrections. So clunky and unique were each of the letters that they had all the particularity of physical objects, like artefacts that archaeologists dig up, that have surrendered something of their original form, evolved in the time spent in the dirt and the dark. I changed seat three times before I was able to settle down and read.

Then initially a moment of disappointment. The diary only covered a period of several months in the second half of 1941. There would be no mention of Schulz, or the incidents in the town that led to Schulz’s death, or even the period Schulz worked for Landau, when the inhabitants of the Jewish ghetto were being sent to the nearby death-camps.

I spent the morning reading. Landau’s diary was something Schulz, or Kafka, would have strained to invent. I was prepared for the descriptions of the acts of violence that Landau participated in, including massacres of civilians (extracts have made it to the internet). But I was unprepared for the 31-year-old Landau’s romantic life. The translator, Nazi-hunter Tuviah Friedman, titled the document ‘Love Letters of a Nazi Murderer in Lemberg and Drohobycz’, a bizarre choice, but a reasonable one. In Felix Landau’s world, his love affair with a certain Gertrude Siegel (Trude), whom he came to know in his previous posting in Radom, is the real world. His duties as an SS officer are just the backdrop to this drama. We know that in 1942 Landau managed to have both his lover Trude and his wife and small children in Drohobycz, but in the period of the diary Felix is pained by the inability to communicate, to send letters, and by the terror that his ‘little Trudchen’ might be unfaithful to him. He concludes many of his entries as if he were directly addressing the absent woman:

3.7.1941 This morning I learnt that we can write letters and that there is a chance for the mail actually to be transported.

While listening to madly sensual music, I wrote my first letter to my Trude. Whilst writing, the order is given to get ready. Commando Operation with steel helmet and rifle, ammunition 30 bullets. We have just returned. 500 Jews on parade for execution by shooting.

This kind of alternation is the fabric of the diary. 30.7.41: ‘I sent Trudchen a letter and a small miniature/love scene from the Baroque epoch.’ 2.8.1941: ‘Since I have had 20 men shot for refusal to work, everything runs like clockwork.’ ‘I could kill her with kisses,’ he writes of Trude. (In fiction you would have to delete such a line). Landau is not a sadist (he observes the trait in at least one of his comrades, who tends to beat people to death while interrogating them), but he performs his duties efficiently and coldly, and believes in the political necessity of eliminating large numbers of Jewish civilians, who support the enemy. (Such large numbers, eventually, that it must have become, at some point, unreasonable to leave any survivors). Landau was not a conscripted soldier, but a National Socialist from the early days, a member of that clique that imposed its racist ideology on the state it had usurped. Jews are always dangerous, and that’s all there is to it.

Sometimes Landau’s propaganda is too effective. On July 28th 1941 Ukrainian villagers report finding the remains of their compatriots murdered by the retreating Russians. Landau investigates, and is met by a priest who declares that the worst of the matter is that fake Jewish passports have been planted on the corpses. Landau realises that he is at the scene of one of his own operations. ‘This is too much. Those allegedly murdered Ukrainians were our legitimately shot Jews, 23 and I think 2 Ukrainians […] The corpses’ papers already stank bestially. I had them soaked in petrol, burnt and buried in the pit.’

A couple of days after this incident, on July 30th, he writes: ‘What would break in me if she, who means so much to me, would disappoint me. I believe I would lose faith in mankind until the rest of my days.’

I mentioned that I don’t write fiction now, that I’m busy enough taking notes. But there’s more to it than that; I find myself getting dizzy from the way fiction permeates reality. Ideas about politics, about culture, about love. It is too easy to construct, with words, versions of reality, and too easy to congratulate ourselves on our success. I think that Felix Landau could have been a very accomplished writer, if he’d attended the right workshops.

‘The essence of reality is Meaning or Sense,’ wrote Bruno Schulz, in a brief essay called ‘The mythologizing of reality’. ‘We usually regard the word as the shadow of reality, its symbol. The reverse of this statement would be more correct: reality is the shadow of the word.’ Such a statement places Schulz alongside Wittgenstein (who had too much Jewish blood in his veins for it to be safe for him to hang around in Austria during those days). We are used to considering that words correspond to reality, said Wittgenstein; for every Thing, a Word. To know what is really happening, he explained, you need to see how reality is conjured through words.

Or to put it another way: if you can articulate something truly fantastical – that a man is not a man, but an insect, for example – the rest is history.

Remembering at a Civil Union

the focus of attention