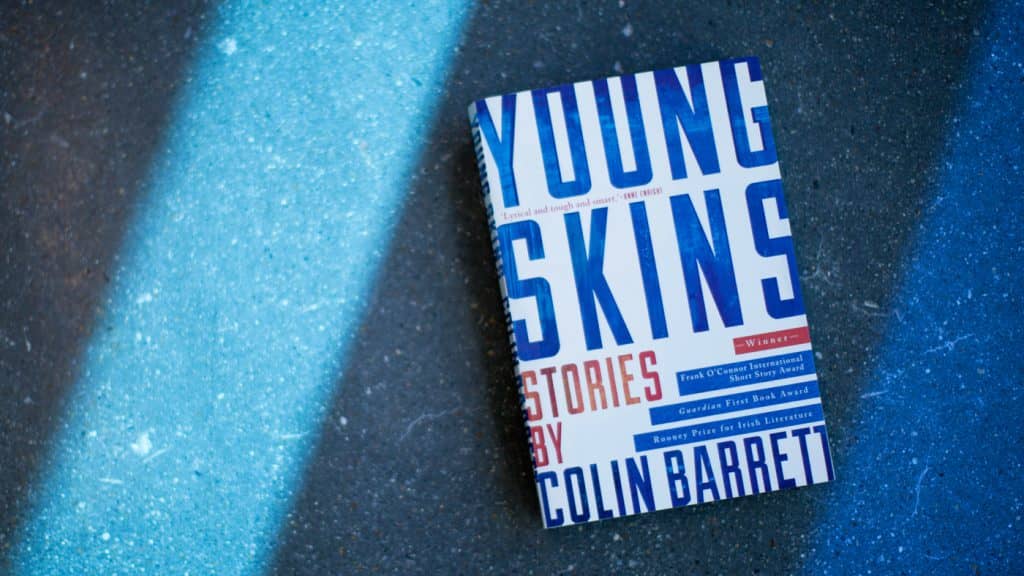 As soon as I opened Colin Barrett’s debut collection of seven loosely connected short stories, Young Skins, I knew I was on to the real McCoy. There is that striking opening sentence that sets the tone and pinpoints location, location, non-location: ‘My town is nowhere you have been, but you know its ilk.’ Fictionality and universality are immediately established, the reader is directly addressed and promptly drawn in. The nowhere and the everywhere are carefully interwoven, just as the now merges with ‘about a thousand years ago’, such is the sameness of the action or inaction, such are the routines of work and, occasionally lethal, leisure in the world of a community as close-knit as it is torn, of cliques and gangs and lone individuals.

The eponymous ‘young skins’, mostly men in their late teens and early twenties, may have ‘the run of the place’ but they know that they are utterly confined, not only geographically and physically (just like the big brown daddy-long-legs trapped in a sink basin), but mentally and psychologically, leading lives riddled with drugs, alcohol and violence and yet frequently longing for love, sense and meaning and a reality outside their own – a marooned, futureless generation, portrayed truthfully but with a large degree of intimate empathy and in a language described by one German reviewer as ‘darkly sparkling, inscrutable, vibrant, authentic and yet unexpectedly tender and humorous’.

The foremost challenge was, of course, to find a tone of voice, subtle and supple, that would combine the (at times paired-off) characters’ small-town vernacular and the narrator’s copious choice of exquisite words as effortlessly as the original. Everyone knows that literary German does not lend itself as easily to the demotic as English, and particularly Hiberno-English, does. And recherché phrases such as ‘the seasons’ dims and magnifications’ might frighten any translator aspiring to do justice to what is, after all, a highly articulate and articulated diction. Alas, German does not have several linguistic strata at its disposal, unlike English where Anglo-Saxon, Scandinavian, Norman, Latin and Greek influences contribute to a rich lexicon and words like ‘gnarl’ and ‘knuckliness’ can sit fairly comfortably next to ‘shambolic serendipity’ (Colin Barrett in an interview).

The title, Young Skins, posed problems of its own. Apart from an entire story entitled ‘Stand Your Skin’, the word ‘skin’ is employed and played with throughout the collection, and I am meticulous or fastidious enough to list its occurrences, as they demonstrate the careful composition of the book even on the semantic level, while at the same time hinting at the characters’ physical and psychological vulnerability: ‘a pile of young skins waited’, ‘the sun cures the skins’, ‘cuts now decorated my skin’, ‘the skin of the water’, ‘the skin was broken’, ‘his skin is loose’, ‘her skin is smooth’, ‘couldn’t stand being in his own skin’, ‘I’ve a soft skin on me today’, ‘a tear running down his skin’, ‘dug his nails into Arm’s skin’, ‘a loyal skin’, ‘bloating up off the skin’, ‘yellowed skin’, ‘in our young skins’. Unfortunately, not all of those usages could be rendered in the same way.

In German, we may greet an old acquaintance with ‘na, alte Haut’ (‘well, old skin’ = old chap) or we may regard someone as a ‘redliche Haut’ (decent skin) but ‘junge Häute’ would possibly arouse associations with animal hides, ‘junge Haut’ with skincare products. So at my behest the author suggested alternative titles, such as Lost Youth, Missing Youth or Wild Youth, which, however, were either too generic or already utilised as book titles. In the end, the German publishers opted for the German equivalent of the ‘wilde’ French title, Jeunes loups, so we came up with Junge Wölfe (and not with the more innocent-sounding Junge Gäste as in the Dutch translation, Jonge gasten). Had we left the title in English, as is sometimes done, readers might have thought of skinheads instead of the ‘skinned’ youngsters roaming and racing and rumbling about fictitious Glanbeigh.

For me as his German translator, Colin Barrett had the huge advantage of being alive and kicking so that I could bombard him with questions about Irish (or Mayo) ways of speaking, stylistic idiosyncrasies or what I thought were editorial oversights, such as continuity errors or intratextual contradictions. My enquiries as to ‘donkey-necked boys’, ‘shuttering legs’, ‘rakey flits’, ‘plum gourds’, ‘braced hips’, ‘kitchen accesses and converges’, ‘shorestones’ or ‘getting one’s end away’ were satisfactorily answered, and I could, en passant, expand my vocabulary.

Exhausted from my relentless questioning, my constant queries and my general querulousness (every translator falls out of love with the object of their textual desire once too many obstacles present themselves…), Colin Barrett was kind enough to thank me for being a ‘scrupulous, patient and observant translator’. First favourable reviews of the German version seem to bear him out.

Hans-Christian Oeser works as a translator and editor. He is one of the leading translators of Irish literature into German and in 1997 was awarded the Aristeion Prize for his translation of Patrick McCabe’s The Butcher Boy. Among his other Irish authors are Sebastian Barry, Maeve Brennan, Dermot Healy, Claire Keegan, Eugene McCabe, John McGahern, Bernard Mac Laverty, Derek Mahon, John Montague, Paul Muldoon, Jamie O’Neill, Gabriel Rosenstock, Oscar Wilde and William Trevor.