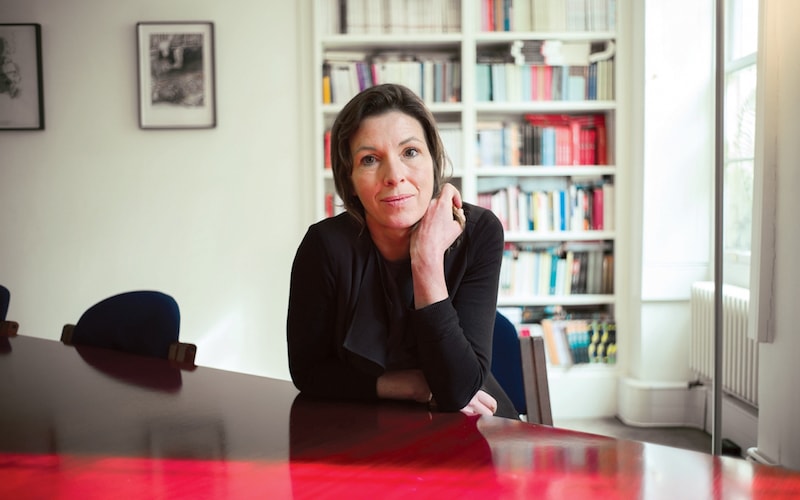 Where does fiction start and memoir end? It’s a question I kept asking myself as I read Transit, Rachel Cusk’s second novel in the trilogy that began with the Goldsmiths/Baileys-shortlisted Outline (2014). I don’t know Cusk and haven’t read any interviews with her, so I’ve no idea what parts of this delicate, deep novel are based on fact. Does it matter? Only, I suppose, if I meet her. Because then I won’t be able to help wondering what bits of me might end up distilled through her quiet attentiveness, to be fashioned, perhaps, into a new, beguiling piece of art.

I name-checked the great German writer W.G. Sebald recently, in a piece I wrote about Mike McCormack’s Solar Bones. Reading Transit, up popped Sebald again. With McCormack, it was the fluid single sentence that evoked the resonance. With Cusk, it’s her long swathes of reported speech. Apart from a few instances of eating and walking, the main action in Transit is conversation; its characters are talkers, their gesture language. On the face of it, the novel’s language is simple: both in how it’s used to describe people and places, and in its starring role as the meat of the one-to-one encounters between the narrator and the other characters. The blurb on the back of the book compares reading Cusk to sitting in a coffee-shop, eavesdropping. And, yes, Transit is like that. But in a world of instant chat and routine phatic communication where people trade opinions about Syria and selfies in the same transitory, reachy-out, mutual-grooming way we used to talk about the weather (and I’m as part of this as anyone), Cusk’s novel offers something different. A vision of how the way we talk can impact on each other; how it can provoke thought, feelings, connection—and maybe even change.

For Cusk’s alter ego/narrator (who might have a name, though it’s only mentioned once so I’m not 100% sure) change is not a casual interest. It is something vital, something she is still reeling from: at the start of the novel she has left her home in Sussex and her marriage and relocated to London with her two young sons. The people in the novel talk to her not because she’s being polite, but because she needs to hear their stories. By asking them questions or just listening—what a thing it is today to ‘just’ listen, when there is Glamour to read, or Facebook to swipe—everything they say becomes important. And here it doesn’t matter whether Cusk has made up everything, or filled in a few blanks, or if, blessed with a phonographic memory and surrounded by people who converse in proper paragraphs, it’s all verbatim. What matters is that I remember these people and what they say, and, most lastingly, how their words work on the narrator—subtly, almost imperceptibly, like a slow, dripping tap.

Like Damon Galgut’s In a Strange Room, everything in Transit feels simple on the surface, but there’s so much going on underneath. Windows, dogs, people as paintings, childhood as prison, family meals. Each time an image recurs, Cusk’s touch is so light it’s easy to think it must have just happened that way. She is such an accomplished stylist I wonder if even the repetition of smiling as a ‘strange grimace’ is not an unconscious tic, but another intentional motif, whose planetary path across the novel’s scope will yield greater meaning on a re-read.

Follow a single image, and there’s a complete, complex and sequenced arc to it. Take the window as stage-set: this first appears in the second chapter, when the narrator bumps into her ex, Gerard, who talks about the big window in the house he shared years earlier while living in Canada. Seeing it from the outside as he returned home, he was always ‘struck… by the human tableaux he saw there, the scenes of love and argument, of solitude, industry, friendship, sometimes of boredom and dissociation.’ The next time we meet a window-stage, the narrator is one of the actors, sitting in Dale’s hair salon asking him ‘to get rid of the grey’. The jewelled products stacked in the window don’t just leave enough space for the world to look in; they make the salon an apothecary’s, even an alchemist’s: a place where base metals (lead=grey) are transformed into gold. Dale sees the narrator’s natural silver as ‘sparkle’ but suggests red and brown highlights so she will look ‘more real’ (lead goes red before gold in the alchemist’s narrative). There is a crisis, the display collapses, the stage-illusion is shattered, but the narrator will wear Dale’s highlights to a book festival where, sandwiched by two male memoir-novelists who happen to be gay, she will just about manage to have her say under the passive aegis of an attractive, forest-creatureish Chair.

The third window appears in the penultimate chapter, on a day that a computer-generated astrologer has told the narrator will have special significance. We’re still in a forest: the narrator is on the outside again, listening to Pavel, her sad Polish builder, tell her of the glass house he built in the deep, dark, Central European woods. A house his father hated because, he said, the floor-to-ceiling windows would let the world watch his son shitting: proscenium arch turned into entire-theatre-as-stage. Pavel tells this story while the shit-like smell of badly cooked meat drifts up from the narrator’s hostile neighbours, Paula and John, who live in the basement. Like Gerard, who won his wife’s heart by losing her dog, and ‘wolf-like’ Dale, a dog features in Paula and John’s life too. Lenny, old and arthritic, who pisses in full view of the world: Pavel’s father’s fear, made brutish and real. That evening the narrator teaches a class in Creative Writing. One of her students tells the story of a Saluki dog he’d brought back from Oman. Isolated from her hunting pack, stuck in a city, his beautiful dog now does nothing but lie around and be petted. The polarity here, between the indolent Saluki and bullied, hobbling Lenny, suggests something below the surface—about choice, and nature, and advantage, and conditioning. Life’s a bitch, we may all be dogs, captive to a greater will. Just because privilege makes some of us feel special doesn’t mean we’re any more free. After the class, the narrator meets a person who may indeed be significant, the one who will use what I think is her name: Faye.

In the final act, the proscenium arch comes back; this time in the form of a beautiful picture window in a picture-postcard house in Wiltshire. The narrator has been invited on-stage again, not as willing subject to be manipulated by Dale’s alchemy or decorative meat in a gay-man-sandwich, but active participant in a family melodrama. The house belongs to her cousin (Lawrence) who has remarried, to the impossibly romantically-named Eloise. (And I think of Eloise and Abelard, separated from each other by a wall. And wasn’t Abelard an alchemist too, in the mystical sense?) As the night progresses, the narrator tries to remain distant, in her preferred role as interlocutor/audience, but her walls keep getting breached. She’s interrogated by people like Birgid, who want answers of their own: ‘I like it that you ask these questions… But I don’t understand why you want to know.’ Tension mounts, and like Dale’s window display, the dinner-party descends into chaos. A chorus of tragic first-world children weep at the roast poussin on their plates, teenage Henrietta howls for her lost father, a misnamed dog moves from construct of imagination into fact, and in the aftermath, exhausted Lawrence—who had previously rhapsodised about his Damascene moment, eating a crap cheese sandwich and knowing he could do better—embarks on the last compelling discourse in the book: on desire and will and freedom.

‘Fate, he said, is only truth in its natural state. When you leave things to fate it can take a long time, he said, but its processes are accurate and inexorable.’ It is then I realise: Transit started with an email from that virtual astrologer; this is a novel about destiny.

Eloise starts crying. The fog thickens, the audience disappears, there is only the stage now, and the actors on it are real. Perhaps it is time, says Birgid, ‘for all of us to go to bed’. In the morning, when the narrator descends, she will be caught between two points of exit/entrance—a half-open door where the family melodrama, mediated by the TV, continues, and the big window, where a ‘strange subterranean light was rising, barely distinguishable from darkness’. Is there any real choice here, or is her path already determined? The final gift of this still, beautiful, profound work is to let us watch that moment, when, acted on by all the stories she has requested, Faye follows the line of action that appears to speak most truth to her. And maybe that’s the closest she—or any of us—can come to understanding the nature of fate and our relationship to it.

Mia Gallagher's books are HellFire (Penguin, 2006), winner of the Irish Tatler Literature Award, Beautiful Pictures of the Lost Homeland (New Island, 2016), and Shift (New Island, 2018), longlisted for the Edge Hill Short Story Award. Mia is a contributing editor with The Stinging Fly and a member of Aosdána.