Multimedia Notes on the Literature of Homelessness 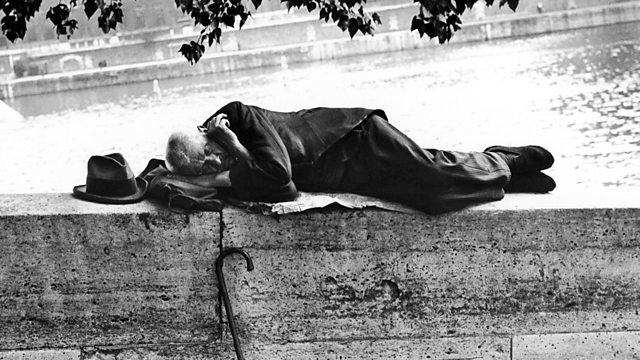 Before you enter the city of Skibbereen, the tall new Poorhouse presents itself to the eye of the traveller; of the common model, being a bastard-Gothic edifice, with a profusion of cottage-ornée (is cottage masculine or feminine in French?)—of cottage-orné roofs, and pinnacles, and insolent-looking stacks of chimneys. It is built for 900 people, but as yet not more than 400 have been induced to live in it; the beggars preferring the freedom of their precarious trade to the dismal certainty within its walls. Next we come to the chapel, a very large respectable-looking building of dark-grey stone; and presently, behold, by the crowd of blackguards in waiting, the ‘Skibbereen Perseverance’ has found its goal, and you are inducted to the ‘Hotel’ opposite.

Homelessness as theme, plot-element, metaphor has been part of the world literature since the beginning. In book 13 of the Odyssey, Athena disguises ‘homeless wanderer’ Odysseus as a beggar so he can gain entry as an alms-seeker to his own palace, now occupied with usurper princes feasting on bounty that belongs (so he believes) by rights to him. The bards who recited the epics in Dark Age & Attic Greece were themselves wandering homeless, blind beggars whose only option to make a living was to perform the greatness of the old princes in the houses of the new ones, flattering all in return for a couple of days’ food & lodging before going back on Desperation road. Homer was a busker with no fixed abode. Epic Poetry was invented by the homeless to keep themselves alive a little longer on the mercy of the rich, the state.

In Sophocles’ Oedipus at Colonus, (406bc), the old, blind, ruined, incestuous King Oedipus, led by Antigone, enters the city of Colonus and sits down on a stone. Immediately they are approached by a Colonic citizen demanding they leave because the area is sacred to the Furies. These days it is the market that is sacred & the furies take form in Dublin City Centre as Gardaí incessantly harass the homeless, moving them on & away from the doorsteps of banks & boutiques, allowing neither rest nor dignity. The story of Adam & Eve’s eviction from Eden, told best by John Milton in Paradise Lost, is a strong reminder of that original & seemingly irreversible rupture with that gleaming world predating houses & houseless. Read books 11 & 12 here, wherein the Archangel Michael, carrying out the instructions of the One True God, expels ‘our parents’ from Eden into the ‘subjected plain’, where to this day we remain.

Urban civilisation – a huge mistake if ever there was one – brings forth oceans of misery throughout all its ages & places. It also breeds labels & categories & all the hate & violence towards the vulnerable that inevitably follows from their mediation as other. Martin Luther, who hated the wretched of the earth as much as any medieval Pope, wrote in his preface to the anonymously printed Book of Vagabonds & Beggars in 1594, (a handbook for the treatment of various classes of beggars) that ‘I have thought it a good thing that such a book should not only be printed, but that it should become known everywhere, in order that men may see and understand how mightily the devil rules in this world; and I have also thought how such a book may help mankind to be wise, and on the look out for him, viz. the devil. Truly, such Beggars’ Cant has come from the Jews, for many Hebrew words occur in the Vocabulary, as any one who understands that language may perceive.’

The book has the advantage, despite its obvious prejudice, of being based on a direct study of & contact with the homeless. The homeless have their own sophisticated & particular ways of talking & interacting with each other & the world that murders them a dozen at a time. Though they die like flies in cold weather, there is yet something of the eternally recurring to their cants & codes & all their other strategies for survival. How do we include these vital features of homelessness in our writings about the homelessness, without it being mere ‘appropriation’?

Writers of a certain kind have always been prepared to use misery to turn a buck & narratives of homelessness began to appear with great regularity as part of the publishing boom of mid-to-late 19th Century. This was in line with that bustling century’s great interest in witness literature – which cynics might call voyeur literature – allowing a comfortably accommodated & full-bellied middle-class readership to observe the poor in their most intimate details without having to put up with their odour or watch out for their erratic behaviour.

Many of these ‘true narratives’ were in fact made up. Sisters of the Road, the autobiography of Boxcar Bertha (1937) was of these million-seller fakes, a fiction which was for a long time taken to be a true account. True or not, Sisters of The Road is one of the comparatively rare accounts of female homelessness in literature – though in sociology, for example, there are many. The lot of homeless women is often far worse than that of men. Men cannot get pregnant on the street, do not have to deal with periods on the street, are not under anything like the same threat of rape & violence. Gang rapes of homeless women by homeless men are not uncommon. The gruesome final scene of Last Exit To Brooklyn is being played out in real life among the self-destroying destitute over & over, morning, noon, & night, somewhere out there in our wide, irredeemable planet.

Like so much else in the experience of the class of Irish people likely to be subject to homelessness or housing crisis, not much will be found from their point of view in our mainstream literature. One has to look to our far more inclusive & comprehensive ballad & song literature for the richer, authentic veins of expression. Ewan McColl’s ‘Moving On Song’ – rendered by Christy Moore as ‘Go, Move, Shift‘ – records in poignant defiance the never-ending, brutally violent harassment of our Traveller Ethic Minority by the Gardaí & other agents of devastation. It would be interesting to see some song lyrics in this tradition – the Homeric tradition – dealing with the current crisis.

Liam O’Flaherty, raised alongside the family pig in a cliff-edge island hovel under constant threat of eviction, wrote often about homelessness. No mere literary tourist on safari in the underworld, O’Flaherty is one of the few writers who, inspired by Zola, managed to seamlessly meld allegorical & naturalistic writing on the poor to mesmerising & long-lasting effect. O’Flaherty’s The Tent (1926) & The Tramp (1937) read like proto-versions of much of 1950s Beckett, & I suspect that a large unacknowledged debt is owed to O’Flaherty by Beckett, about whose many florid tramps & over-determined destitutes enough has surely already been said.

Aside from the literary gombeenism of Boxcar Bertha & so much more like it, there is also of course an honourable, progressive tradition of embedded & partisan writing about the homeless. Most will argue that this genre reached its peak in Orwell’s Down & Out in Paris & London, & that is a fine book, but the book which inspired Orwell & is now obscure by comparison, was Jack London’s The People Of The Abyss. This was written undercover in 1902 in the slum-ridden cockney East End, the (now vastly under-rated) author one of an estimated 500,000 desperately poor to be found there. Engels’ The Condition of The Working Class in England is a heartbreaking account of the truly hellish conditions in which workers, often Irish, lived in during the glory days of British Industrialism, which were workhouse days in the Irish west. Engels mixed naturalistic descriptions of the poor with deep political analysis & wrote in an accessible language easily understood by an intelligent general audience, many tens of thousands of whom were transformed into communists by his & similar writings of that period.

Can people still be moved to political action on such large scale by a mere book? It seems to me sometimes that book writing has long ago lost this power, that writing has itself become a detached, marginalised, ignored, melancholy, pointlessly meandering kind of a thing to be doing. It would be great to be proved wrong about this. Whether I am or not, I look forward very much to seeing & experiencing what we as a community of individuals can come up with on the theme of the housing crisis.

In our Winter 2017 issue (Issue 37) we will have a special feature examining the causes and consequences of the inadequate supply of affordable housing here in Ireland. We’d like to invite submissions of poetry, fiction and non-fiction that explore different aspects of the ongoing crises in housing and homelessness.

International submissions are welcome. All work must be previously unpublished.

We will accept submissions until Wednesday July 12th. More information can be found over here.

Solo for saxophone and geraniums