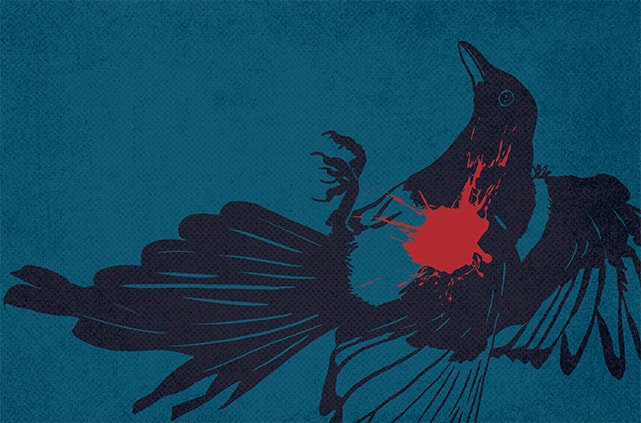 Let’s consider the story ‘Kennedy’ by Desmond Hogan, as contained in his recent collection The History of Magpies (Lilliput Press). Of course with Hogan the word ‘story’ presents an initial difficulty—it doesn’t suggest the hallucinatory effect of the text that we are about to encounter, an effect that operates on both a panascopic and a microscopic level; and neither does the text offer us any of the usual, storyish consolations: there are no arcs, no journeys, no epiphanies.

Hogan’s method, in this later period of his writing, is by now well-established. The story typically opens out from the dense shade of a real-life history or event, or from the realm of some urban lore at least. In the case of ‘Kennedy’, the event is the assassination by automatic pistol of a 19-year-old youth on wasteground near the railway yards, not far from Colbert Station, in Limerick city. The initial narrative recít is neo-journalistic in style – a breathless patina of facts is sprayed onto the page. The writer’s colour palette—and no writer of English alive uses colour more precisely, more vividly than Des Hogan—is then immediately employed to give us the colour of the victim’s eyes: they are “blue-green, brown-speckled”, as of a “blackbird’s eggs.” Quickly now comes the costume design, and the writer has an innate understanding that in a world such as he depicts, the wardrobe detail is critical and defining; in such a world it is the cloth on your back that names you, and it is the mark also of your affront to the world—we learn that the victim, young Kennedy, wore “a hoodie jacket patterned with attack helicopters”. We register the detail, and we can see the jacket, and it dates the event, I would say, to about 2007 or 2008. And now, in the fifth short paragraph, as the murder vehicle is disposed of, near Lough Gur—we are no more than halfway down the first page—the camera pans back from the stolen Ford Kuga as it burns out to take in “the hesitant moment … when blackthorn blossom and hawthorn blossom are unrecognizable from one another, the one expiring, the other coming into blossom”. You could say that the technique here is broadly Lynchian – as in the close-up of the blade of grass that tickles the sawn-off ear that opens out the mystery of Blue Velvet (and opens out the mysteries of love) – but also the sympathy is Shakespearean, with nature sending up its sighs as the tragedy is recounted.

In succeeding short paragraphs, we jump-cut from the blossom of the blackthorn and the haw to the male catkins yellow with April pollen, to the whitlow grass that Kennedy’s grandmother used to cure inflammations, to the creeping summer cinquefoil that soon will cover the wasteground of the homicidal event. There are writers of the city, and there are writers of the countryside; often they experience discomfort, an almost palpable shrinking of the talent, when taken from their usual ground. Desmond Hogan, by contrast, is as vivid on the streets as he is in the fields, and he is especially piquant of observation in those liminal zones where the two meet: the scabby riverbanks just outside town, the hoarsely singing wastelands, the places that the French call vague terrain.

But then borders collapse generally in Hogan’s work. The old, inglorious back-and-forth between Ireland and England has been perpetually chronicled in his pages until the two battered nations seem to fall into the one shabby, profane, tragicomic entity, their lore shared by ferry route and budget airline; in ‘Kennedy’, we learn of the rooms you can still rent for twenty pounds a night in Paddington, and it is alleged that it was the Act of Union, of 1801, that brought the mistle thrush to Ireland. Too little is said of the humour in Hogan’s stories; it is spiky often, spiky as a sea-urchin in fact, but it’s ever-present.

In ‘Kennedy’, lore-of-family gives onto lore-of-place, and the narrative tangles up, unwraps again, spins out. We remember the eponymous fallen youth, and we remember his betrayer. They met at the boxing club. The narratives arches forward; it pulls back. The cast widens, we meet many of the Limerick street denizens, and we meet its prisoners too – ‘One youth with a golfball face, skin-coloured lips of the young Dickie Rock, when his baseball cap was removed, a pronounced bald patch on his blond head, had a parakeet in his cell’.

Hogan is a writer of the most precise geography, and he understands that location dates backwards as well as forwards – on these fields, in these streets, time is unfixed, and it rotates. How could time be anything other than circular, Hogan seems to ask? You cannot escape the place of your blood nor the pull of history – ‘They were of Thomond, neither of Munster or Connaught, Thomond bodies, Thomond pectorals.’

As ever in this present mode of his writing, Hogan himself intrudes on the narrative, usually late on. And here he comes, as this sad, terrible, gorgeous story winds down – ‘I am forced to live in a city of Russian tattooists, murderously shaven heads, Romanian accordionists, the young in pall-bearers’ clothes – this is the hemlock they’ve given me to drink. The Maigue in West Limerick, as I crossed it, was like the old kettles Kennedy’s ancestors used mend.’

‘Kennedy’ is among 12 stories in The History of Magpies – the method in each is the same, and it feels like a novel as much as a sequence of stories; it is a unified iteration, a witness text. It is the most ambitious work of Irish fiction to be published this year, and it has not been reviewed in the national media. All the false layers and screens that have been erected across our country are pulled down in these pages – we get the peeled cities, the revealed countryside. Ireland is exhibited as precisely what it is: a gaudy, teetering, beautiful, dangerous, hysterical, haunted, failing country.

The immodest purpose of the true prose stylist is to build a cathedral in words. Clause by clause, sentence by sentence, paragraph by paragraph, the eaves are raised and the vaults are ceilinged, the pinnacles leap and the gargoyles howl, the nave is opened out. All of this must be hewn from the rough stones of the stylist’s wordhoard. Desmond Hogan in this book is writing at a very high pitch of ambition—he is trying to build the cathedral. The project is immense.

‘Kennedy’ was first published by The Stinging Fly in Issue 16, Volume 2: Summer 2010. It can be read in full here. The History of Magpies is out now from Lilliput Press.

Kevin Barry is the author of three novels and three collections of short stories, including the soon to be published That Old Country Music. He also writes plays and screenplays, and is co-editor and publisher of the annual arts anthology Winter Papers. He lives in County Sligo.

Antinoos Puts the Boot in