My Life as a Plagiarist 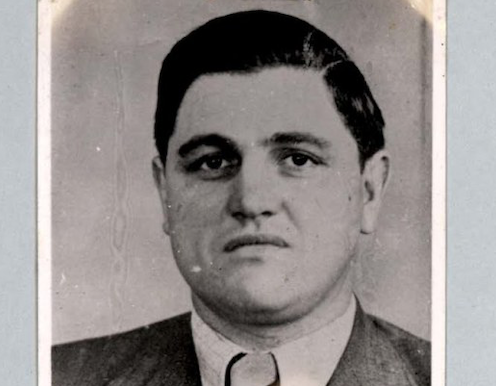 Some notes on writing ‘First Love’ from the short-story collection, Trouble.

Not really plagiarism, if you admit to copying. But what is it when you tinker with somebody’s unpublished journal and put it in your book of stories?

The diary of SS officer Felix Landau was used in evidence at his trial for war crimes in 1962. An Israeli Holocaust archive translated it into English in 1986. I read a copy of this translation in a library in Munich in 2016 when researching the Polish short-story writer Bruno Schulz. Landau had used Schulz as one of his personal slaves while Judengeneral (head of Jewish affairs) in Drohobycz, a small city then in Poland and now in Ukraine

The diary covers a few months of 1941 and Landau makes no mention of Schulz, but I found myself drawn in turn into Landau’s story. In 2018, when getting my essay on Schulz ready for publication, I reread Landau’s diary. I’d hardly pressed send on Schulz when I started rewriting Landau. The notion that I was copying didn’t hinder me. I felt about it as though it were a story I’d written myself. Magically, the first draft was already in my hands, with the problems of chronology and timescale already resolved. In any case, I did not want to change or omit any events related to Landau’s position as an SS officer. What can you invent about the Holocaust? The problem is to be able to find the language to approach it at all.

I had come across the diary of a war criminal and been surprised to find it was also a love story. My idea in rewriting it and the title I chose – ‘First Love’ – was to invert this expectation. The word ‘love’ contains an impossibly powerful charge. So powerful that we usually do not know what is being spoken of. We identify with lovers. One reader of ‘First Love’ commented to me that she found it sad, after reading the footnote with which I conclude the story, that Felix and Trude were divorced in 1946, after three years of marriage. It seems it is hard not to read the story in the romantic register, even though the same footnote stated that the Jews of the Drohobycz ghetto were exterminated at Belzec in 1942.

The heart is a self-flattering piece of machinery and the function of much fiction is to involve the reader in the mechanism. Even when all the material is there for its subversion, it seems to require some effort to disengage from the charm of a story that says it is about love.

Felix Landau is pursuing another man’s fiancée. He has a wife in Vienna, and two small children. Love is a war zone, even when there’s no war on.

On July 14, 1941 Landau describes participating in the shooting of 23 civilians. Then the excitement of receiving a letter from Trude, and his torture at being unable to immediately read it because of his duties.

Though used at his trial, Laundau’s journal was not central to his conviction. For his involvement in the massacre mentioned above he might have claimed to have been following orders. His conviction was on the basis of some quite specific murders. One of these was committed on June 14, 1942. The witness, a Jewish man, recalled the date because he had turned 21 that day:

“I […] saw Mr Landau sitting on the balcony. He was sitting there with Trude Segel, who was wearing a bathing suit.” [The witness describes hiding behind some trees to avoid being spotted. He saw Landau and Segel go inside for a moment then return with a low-calibre rifle.] “He loaded the rifle and gave it to Trude Segel and she shot at the crows. There were lots of crows, big ones. Fliegner’s job was to collect soil, to dig it out and fill those wooden things, and the girls would carry them away. But the girls didn’t appear, because of the shots. They hid. He stayed and prepared the soil. He was an Austrian corporal during WWI under Franz-Joseph. Now he was 50. And he said to himself, I don’t need to be ashamed. So he did his work. He stood there and watched her shoot. Now what do you do when you see someone shoot badly? I imagine he smiled. I remember how Landau tore the gun from Trude and reloaded. Then he shot the man, just like that. He died on the spot. The Jew dared to laugh at his girl.”

I transcribed the above account some years ago from an interview in Finding Pictures, a documentary film by Benjamin Geissler on his discovery of the pictures painted by Schulz in Landau’s house in Drohobycz. I had interviewed Geissler at his home in Hamburg, in 2016 (a few days after first reading Landau’s diary in Munich) and got the address of Landau’s house. I travelled to Drohobycz the following month, during a very cold spell in late November, and looked up at the balcony where Trude had sunbathed and Felix had shot Fliegner.

Long before I ‘fictionalised’ Landau’s diary, I had been looking at him from various angles, and at his life before and after the few months covered by his journal entries. This was during a decade I spent studying the Holocaust and the ideology in which Landau was immersed. This guided me in what I wanted to cut and add in my rewriting. Firstly, I was not going fictionalise historical events. The facts are the immobile architecture of the story. But I saw that they were the background against which the world of the emotions and the words we use to describe them could be held up and examined.

We have good words and bad words. ‘Love’ is good, and so is ‘civilisation’. We indulge ourselves with such words. This is a form of idolotary of language perhaps, or self-idolotary, in which we imagine that love and civilisation exist as essences. In fact, only the words, the abstractions, exist in a pure state.

While writing this piece, I came across some old notes from the period of my Schulz/Landau obsession. They are a mess of handwritten pages, but going through them reminded me that the account in ‘First Love’ is just a snapshot from a longer story. One note on Trude (Gertrude) Segel reads:

GS was in Frankfurt in the 50s in the red-light district but was killed.

But I have no recollection of the source of this bare sentence, scattered among others, dealing with other matters. Or where I got the following note, which is just marked ‘Yakob Goldstein testimony, Haifa, 1959’.

There was a party in the riding hall Landau created, and they went there after the killing in the woods, for example. And they made a party there one day and Trude was dancing half-naked on the table, and the problem with Trude was she had every time other lovers, and Landau was disappeared. And his trouble, his aggression he canalize [channelled] in the Jewish people. […] When they come back from the killing of the Jews they go and drink a lot of vodka and play the Moonlight Sonata by Beethoven. Directly after the killing.

In the real word the acts of love and civilisation are human acts and partake of their opposites. The Nazi ideology was a product of civilisation. The cruelty of Landau part of his love.

This is the black milk Celan writes of in ‘Death Fugue’, and he might have been writing of Landau:

When putting Trouble together I wondered, for several reasons, if it was right to include ‘First Love’ in the collection. In the end, I liked the disruption it causes, which allows the other stories to be read more easily. ‘First Love’ seems to knock down a wall. It does some work for me.

Landau may not have known Bruno Schulz in his first months in Drohobycz, the period covered by the diary. He probably would have not found him worthy of mention in any case. But I inserted Schulz into my version of the diary, as a shadow almost, for those who can recognise him. Part of me regrets that people will read Landau. It is Schulz who should be read.