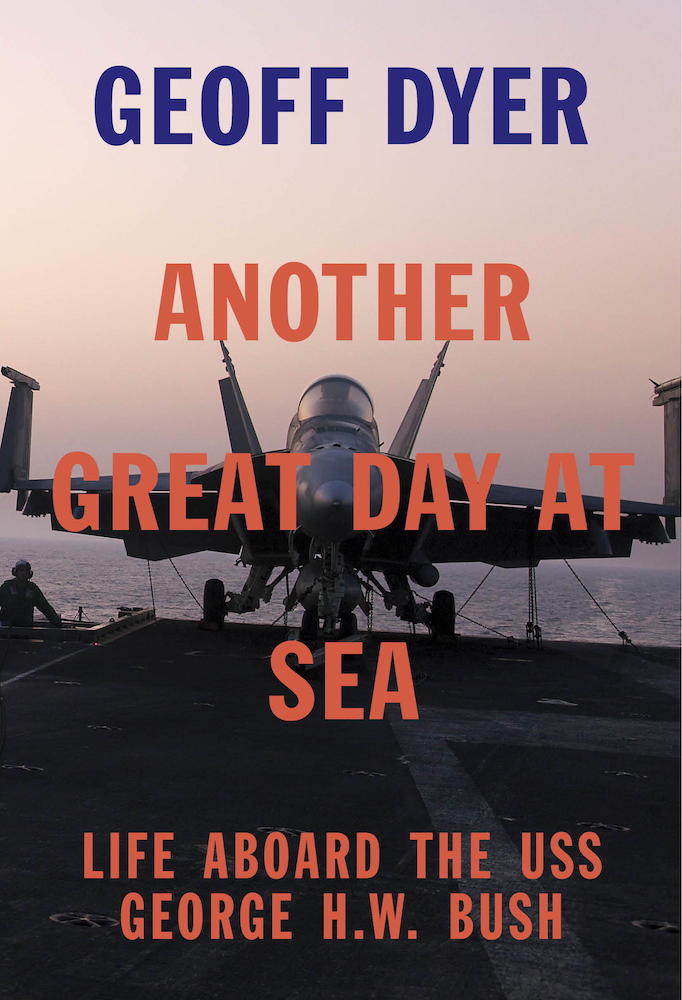 Another Great Day At Sea

For years I was a Geoff Dyer evangelist, telling anyone who would listen that they absolutely had to read his books. Now, though, it seems that everyone is reading them, so I guess I can go home and lie down for a while. There’s even a major, first-ever conference on Dyer’s work set to take place this summer at Birkbeck University in London—another sign that Dyer is finally garnering the kind of heavyweight recognition befitting an author who, more than two decades into his publishing career, has amassed a body of work almost unrivalled in contemporary letters for its breadth and originality.

While Dyer has written several books that can be more or less clearly categorised as novels, Paris Trance and Jeff in Venice, Death in Varanasi being the best of these, it is in his other books, the famously genre-eluding ones, that his uniqueness is most apparent. Consider his modern classic, Out of Sheer Rage—a book ostensibly about D.H. Lawrence that takes around a hundred pages before it even gets properly onto its subject, and then, once there, never stays on it for very long, careering off into brilliant, hysterical digressions on everything from Dyer’s neurosis—the neurosis that prevents him from being able to write a straightforward book about D.H. Lawrence—to the potential catastrophe for a writer of having children, to Dyer’s erotic fantasies as he reclines with his girlfriend on a beach in Mexico. Then there is Yoga For People Who Can’t Be Bothered To Do It, a collection of linked travel vignettes that unfurl into a resplendent meditation on aimlessness, transience, pleasure, loneliness and beauty. But Beautiful is a book about jazz, made up of fictionalised portraits of great figures from the music’s heyday, while Zona describes, scene by scene, Tarkovsky’s glacially slow film Stalker, yet manages to be both surprising and captivating. There is also a book about photography, a book on the Great War, two collections of essays, and more besides.

Along with the uncommon range of his interests, it is precisely by inverting the attributes we typically associate with contemporary English literature that Dyer stands out as the vital English writer of his generation. Frequenting the major post-War English writers can feel a bit like dwelling in a series of cramped, windowless rooms, breathing stale and unhealthy air. The lingering sense is of a pettiness of spirit, the kind of snidey, sneering belligerence we find in the likes of Julian Barnes, Hanif Kureishi, and the Amises (father and son). It can seem as if the ultimate ambition of English literature is to shrink the entire universe to the size of England, to the size of an Englishman—a kind of imploded imperialism. Hence the relief attendant upon reading an author such as Dyer—still amusingly self-deprecating in the venerable English tradition, and loyal enough to that tradition not to plunge headfirst into literary modernism and renounce the value of telling good stories, yet whose aesthetic instincts are rooted in generosity, exuberance, curiosity, expansiveness, and the willingness to admire. It’s no coincidence that many of Dyer’s narratives involve him, or his characters, seeking out sunny, exotic, beautiful locations—and people—far from dreary England and its grim-faced populace. (Dyer himself has recently moved with his wife to his spiritual home of California, where he intends to see out his days.)

Particularly when viewed against the rainy backdrop of the English tradition, there is something subversive, provocative even, in Dyer’s career-long insistence on treating happiness as a literary theme. Convention has it that you can’t write well about happiness—it writes white, remember?—yet that’s precisely what Dyer does. There is the happiness of young expats dazzled by love and Ecstasy in nineties Paris; the happiness of the stoned slacker-intellectual drifting through Asia, Europe or the States, alert to the peak experiences of art, desire, music and friendship; the happiness of twenty-something, bohemian dolesters on a Brixton rooftop. Dyer also serves up a fair amount of sex in his books and, again in defiance of literary convention—possibly of the sort that is grounded in a residual puritanism—most of it is not only well-written, but good sex.

Another Great Day at Sea is Dyer’s fourteenth book and the first in Visual Editions’ Writers in Residence series, overseen by Alain de Botton. Handsomely furnished with photographs by Chris-Steele Perkins, the book sees Dyer spending time aboard an aircraft carrier, and not just any aircraft carrier, but the US George H.W. Bush—all in all, perhaps not the most beloved vessel in the lands around the Arabian Gulf where it is deployed throughout his stay.

Dyer-watchers will be pleased to know that all of his trademark special-effects are on display here. There is the classic Dyer persona: bumbling, fussy and self-conscious, lankily roaming the cramped confines of the carrier ‘like Peter Crouch looming into the penalty box’. There are the delirious exaggerations and the antic, Amis-inflected riffs which double back on themselves, pile up to the brink of collapse, and finally break free of all narrative utility to become pure exercises in style at play. At one point, Dyer has a bewildering encounter with the ship’s drugs counsellor, who tells him about an alarming new trend—which may or may not even exist—towards abusing sewage as a recreational drug. ‘Seems teenage kids have a bag of shit and inhale it. Why? Guess there’s the methane,’ she says. Dyer retreats to his cabin and listens to his Dictaphone recording of the conversation. There follows an exuberant dance-music fantasy in which he samples the counsellor’s voice to produce a world-conquering, hedonistic trance track—’GIT THE HIGH!’

Elsewhere, the riffs are less dazzling, and we have the sense of Geoff Dyer straining after a certain effect, namely the effect of sounding like Geoff Dyer. After being told he’ll get used to the dreadful noise of the jet engines above his cabin, Dyer feels like yelling back, ‘That’s where you’re wrong… The essence of my character is an inability to get used to things. This, in fact, is the one thing I have grown accustomed to: an inability to get used to things. As soon as I hear that there’s something to get used to I know that I won’t; I sort of pledge myself to not getting used to it.’ An amusing enough outburst, yet as it rather feebly trails off, it can only remind us of how much more dashingly Dyer has done this kind of thing in the past—in all those uproarious rants that streak across his D.H. Lawrence book, for example. It must be one of the unhappier aspects of being a highly accomplished, middle-aged author to find you no longer need only strive to emulate your literary idols, but must also live up to your own prior work, outwrite your younger, dauntingly clever self.

Most of the time, though, we are happy for Geoff Dyer to be playing the role of Geoff Dyer, not least when he launches into the kind of semantic interventions he’s so adept at, breaking words and phrases open, examining their ripples and ramifications. He has fun pondering the captain’s daily intercom-reminder that it’s ‘a great day to be at sea’, with its subtle variations implying that the next day might be greater still. The crew, Dyer suggests, ‘would have been sorely disillusioned, possibly even mutinous, if he’d summed up the day as merely “tolerable”, “OK” or “fine”. There was something very American about this ability to dwell constantly in the realm of the improvable superlative.’ For Dyer, the aircraft carrier is a fascinating linguistic universe, dense with acronyms, where the bewildering complexity of the technological processes he observes results in ‘systematic failures at the level of the verb’ and the noun, but whose polyphony of American voices thrills him (Dyer is an unabashed lover of America, and he does a fine job here of recording the crew members’ quirks of accent and phrasing).

A trick Dyer frequently pulls is that of laying down some sore thumb of a cliché and then running with it, displaying his fanciest footwork just when we thought he’d grown sloppy. The noise of the jets taking off above his cabin, he tells us, ‘was like a train rumbling overhead.’ Which is immediately followed by, ‘It was nothing like a train rumbling overhead; it was like a jet taking off overhead—or in one’s head. It was a noise beyond metaphor.’ Elsewhere, he describes a visit to the flight deck: ‘There was a lot to take in—or not to be able to take in.’

For all the stylistic panache, Dyer is at his most compelling when he is at his most vulnerable. He is never quite able to forget that he is among the oldest people onboard the carrier. When his residency comes to an end, the sight of women dressed in civilian clothes stirs Dyer’s dormant libido; he wonders about ‘the nineteen- and twenty-year-olds who’d been on deployment all these months… Perhaps this belated ‘lechery’ of mine was a symptom of diminished sexual feeling’. The awareness of ageing, like the death of Dyer’s parents, provides melancholy ballast to the humour and enthusiasm carrying the book.

The buoyant tone also gives way to something darker in a remarkable and unexpected chapter. Back on land (‘the beach’ as it is known aboard the carrier), Dyer’s confidence takes a blow when he reads an essay written in the seventies by Tom Wolfe. Suddenly, all the gears get jammed: unnerved by the superiority of Wolfe’s writing and sucked into ‘the infinite feedback loop’ of self-doubt, Dyer can write nothing but banalities. ‘Once your confidence goes other things start to go with it,’ he says. ‘You fall into depression. You begin to dread the page, the words, the futility of putting the latter on the former.’ What follows is a brilliant, extended simile comparing the failing writer to a fighter pilot who, though his colleagues don’t yet know it, has lost his nerve. It’s an unsettling performance, and a reminder of what makes Dyer’s such an engaging voice: beneath the banter and hilarity, there is always this looming darkness, the awareness that death, incapacity or madness are perennially liable to break through life’s sunny surface and drag us under. As the passage ends, we realise that, like a jet pilot landing safely amid zero visibility and treacherous conditions, Dyer has pulled off a hell of a feat: transmuting his fear of being unable to write into a virtuoso piece of writing. It’s the same stunt that Fellini pulled with 8 1/2—plunging into rather than fleeing the void of creative sterility, yet emerging—wondrous paradox—brandishing great art.

Another Great Day at Sea lacks the startling formal originality of some of the author’s earlier books. At times it reads like a ‘Best of Geoff Dyer’ compilation, reprising all the nifty licks that drew applause in his earlier days. There are fewer laugh-out-loud moments than in, say, Yoga. Like virtually everything Dyer has written since the mid-nineties, though, the book is eminently readable throughout. There is plenty in here to admire. But then, everyone admires Geoff Dyer nowadays. Rather than merely admiring him, then getting back to the business-as-usual of churning out book after structurally unadventurous book, might it not be time to start internalising his influence? As Dyer once wrote with regard to an illustrious precursor of his, Milan Kundera, ‘If we admired less, might we absorb more?’