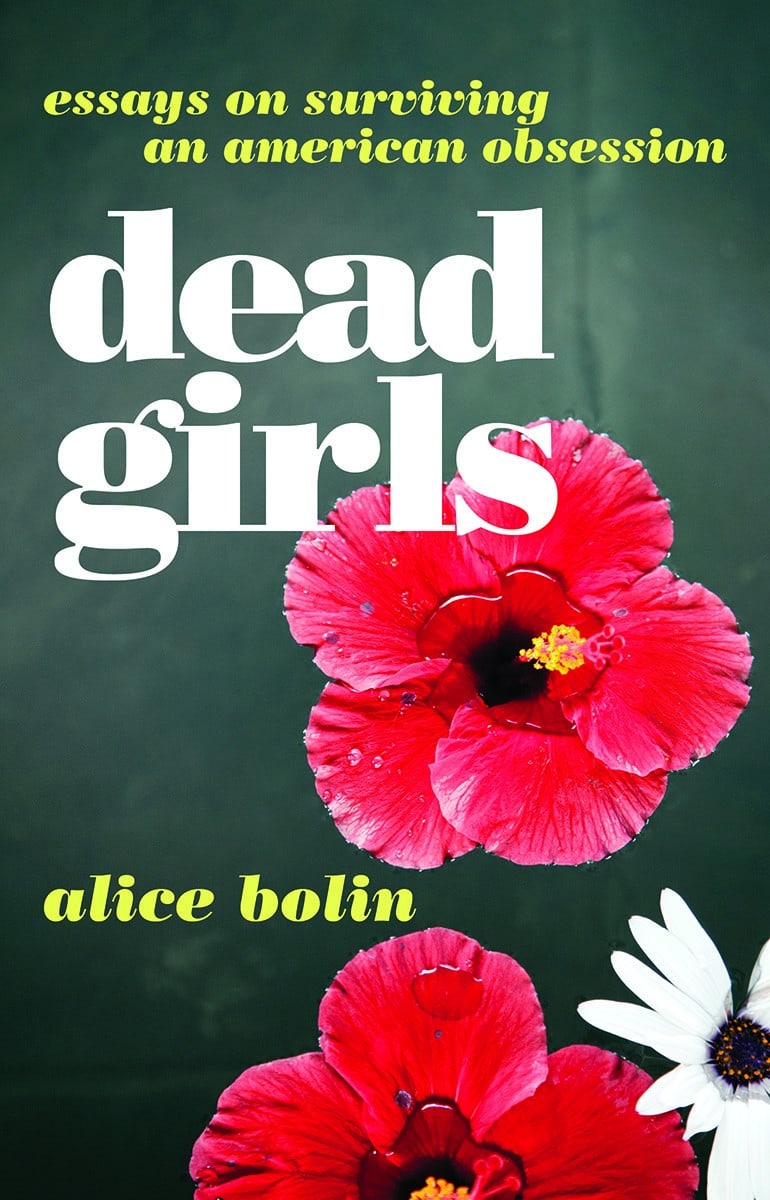 “In the Dead Girl Show, the girl body is both a wellspring of and a target for sexual wickedness…” Dead Girls, a debut essay collection by Alice Bolin, takes as its theme America’s obsession with the exquisite female corpse. Presented in four sections, ’The Dead Girl Show’, ‘Lost in Los Angeles’, ‘Weird Sisters’ and ‘A Sentimental Education’, chapters address true crime and crime fiction, TV shows including True Detective and Twin Peaks, and an audaciously diverse, occasionally lurid collection of pop cultural landmarks, including The Girl With the Dragon Tattoo, Agnès Varda’s Cleo From 5 to 7, the Bling Ring burglaries and Britney Spears’ 2007 breakdown.

This collection feels curated by and for an online readership, each chapter a ‘thinkpiece’ addressing a cultural meme. Some are played out – True Detective feels unremarkable today, a passably esoteric warning from 2014, auguring a period of Bro Nihilism yet to come – while certain chapters venture too far into Didion pastiche (in ‘The Dream’, a gently ghoulish discussion of the Hollywood Forever cemetery is punctuated with stodgy digressions on city planning, farmers, drought and Frank Norris’s novel The Octopus). However, Bolin writes brilliantly, in a tone that’s somehow both academic and entertaining, about overlooked pop culture gems like Veronica Mars and Top of the Lake, which she calls “the two great feminist Dead Girl Shows”, each featuring a protagonist who tries to solve the mystery of a woman’s murder as well as her own rape (I find myself wishing here that Search Party was out when Bolin was writing this book; in it the mystery of a maybe-dead girl becomes a canvas for another woman’s search for meaning).

Bolin criticises male authors who smuggle misogyny into their work in the name of an apparently feminist message – Stieg Larsson comes in for particularly harsh criticism, despite Bolin also admitting to enjoying his novels – but remains self-aware, interrogating her own motives for writing about the Dead Girl phenomenon. One essay, ‘My Hypochondria’, reads like milquetoast confessional filler until the author begins to scrutinise her own solipsism, identifying narcissism as “a confused response to an uncertain world: narcissism as political paralysis”, a prevailing cultural mood which is the subject of new releases My Year of Rest and Relaxation, and the far less entertaining Crudo.

Occasionally Bolin takes disappointingly easy shots at rather lightweight examples of misogyny. Discussing The Girl With the Dragon Tattoo, she details the journalist Blomkvist’s fascination with the ‘puzzle’ of the disappearance of Harriet Vanger, writing “The implication of this choice of vocabulary, if I am being uncharitable, could not be more clear: that women are problems to be solved, and the problem of absence or a murder is generally easier to deal with than the problem of a woman’s presence.” This is a leap. I’d argue that the abject horror of the situation lies in what a dead girl exposes to men about themselves, a truth women know already; that men are capable of evil. Similarly, to point out that the femme fatale of LA noir “reveals a deep fear of women and sex” is obvious; the more interesting question is what noir reveals about fragile masculinity.

Reading these essays, I find myself wishing that Bolin would come out and admit that sometimes women are complicit in the evils of men, especially women in destitute, disreputable, criminal, hyper-capitalist or noirish situations where they are left with no other option. This doesn’t absolve the patriarchal culture that put them in this position; I’m just tired of morally flawless women being the only ones allowed to be heroic, or valued, or mourned. It’s yet another version of ‘having it all’, only this time women are cast as the perfect victims.

Bolin briefly mentions Lana Del Rey, a popstar who sings that she was ‘born to die’, but only really acknowledges her deeply shallow persona (she writes “It’s a feat to make yourself disappear while actually being straightforward, honest, even autobiographical”). Yet throughout her career Del Rey has subverted the Dead Girl trope and made it her own; she’s the Living Dead Girl, the world’s first culturally-flattened popstar, a luscious cardboard cutout who sings about passion without giving anything away. On her track ‘Dark Paradise’ she might even be singing about a Dead Boy.

Del Rey cultivates an air of sex and violence, because for her the two are inseparable. She has ‘trust no one’ tattooed on one hand, along with the phrase ‘die young’, and has an album titled Ultraviolence featuring the track ‘I Fucked My Way Up To the Top.’ She is the knowing, self-aware product of a late capitalist entertainment industry. Del Rey’s air of moral grub, and her apparently low expectations of the rest of humanity, are what I’ve always loved about her.

“It’s too easy for me to blame everything on Joan Didion”, Bolin writes, as Dead Girls nears its end. Yet I blame Bolin’s Didion obsession for everything about this collection that is gratuitous—the meandering descriptions of LA and highways and water systems and elegant confessional ennui which read like Didion watered-down. It’s infuriating, because Bolin can be devastating when it suits her, like when she singles out the true crime obsession with getting ‘inside’ the mind of the killer as a shortcut to victim-blaming, or when she chides Serial’s Sarah Koenig, amusingly, for her “eccentric myopia.” Bolin exposes the podcast as shallow, writing that “when a cop kills an unarmed man, it is because he senses his power being threatened by fear that he believes he should never have to feel. When a man kills his ex-girlfriend because she leaves him, he is saying the same thing: shame and sadness are feelings I should not have. Honor killings are, it turns out, as American as apple pie.”

I wish Bolin had taken her analysis further, not so much of the men who are Dead Girl killers, or of the media which gloats over every female corpse, but of the Dead Girls themselves. There’s a central, confounding paradox at the heart of third wave feminism: in our current climate, it’s apparently impossible to ‘empower’ women without dwelling on their pain. So many tabloid Me Too stories double as pornography, while every article ‘raising awareness’ about anorexia is secretly a guide to becoming anorexic. Dead Girls darts around, but never wholly addresses the problem of whether women raised in this climate can ever entirely live for themselves, or whether they’ll always be someone else’s canvas.

Bolin, to her credit, expresses queasiness about her decision to call the book Dead Girls (her alternative title is ‘Men Who Hate Women’, in homage to Stieg Larsson). But she falls into a trap, again and again; she takes away any agency these women might have had – admittedly never as much as their male counterparts – by portraying them as innocents. In 2007 Britney was, of course, losing her mind, and was very much a victim of lucrative, morbid media appetites, but she was also having fun, earning vast amounts of money, smashing up cars with a golf umbrella and telling paparazzi to “eat it, lick it, snort it, fuck it.” The same could be said for Miley in 2013, and Lana for the entirely of her career.

As I was reading Dead Girls I watched social media respond to Nanette, a kind of anti-comedy stage show, a ‘farewell to all that’, written and performed by comedian Hannah Gadsby. In it Gadsby takes aim at a quote attributed to Pablo Picasso, one which has garnered 12 bizarre ‘likes’ on Goodreads, and which seems too ridiculous, too flamboyantly misogynistic and mad to actually be real:

Every time I change wives I should burn the last one. That way I’d be rid of them. They wouldn’t be around to complicate my existence. Maybe, that would bring back my youth, too. You kill the woman and you wipe out the past she represents.

It reminds me of a line Bolin quotes from the film Ginger Snaps, said by Ginger, the newly-menstruating, homicidal teenage girl who is in the process of becoming a werewolf. “I get this ache”, she says after losing her virginity, “I thought it was for sex, but it’s to tear everything to fucking pieces.”

You get the sense that Dead Girls would be more fun, and more insightful, if Bolin could bring herself to talk more about bad women, and to admit that women, like men, dream of destroying the things they love. In pop culture at least, the goals of feminism will never be achieved until we allow female characters to sometimes be guilty. A feminist analysis of the Dead Girl should take this into account, even if we lack for examples (‘Amazing Amy’ from Gone Girl is the best-known, and Bolin does discuss her, but focuses more on her spineless husband Nick).

Trauma creates schisms, and traumatised people learn to wear a mask. Violence, greed and oppression created a two-faced America, a land of promise which takes away your rights and your health and your money. They created the archetype of the ‘strong woman’, who must be strong in order to argue convincingly that she has been victimised by men (reader, always be suspicious of those who define feminism as a woman’s ability to survive on men’s terms). Evil breeds duality, the kind where women learn to stay with the trouble, to smile through it, while somewhere inside they foment garmonbozia.

This leads me to the great, glaring omission in Dead Girls that is Twin Peaks: The Return. Bolin mentions writing her essays in 2017, the year in which the series came out, but their timelines must not have aligned, because it seems unthinkable that Bolin would willingly omit it. She does, however, discuss the original Twin Peaks, doing it a disservice by comparing it to True Detective, and observing that “there can be no redemption for the Dead Girl, but it is available to the person who is solving her murder.”

In Twin Peaks, however, the girl never dies (“I am dead,” Laura says, backwards, “yet I live”). She comes back again and again to haunt a community complicit in her painful life and death. Twin Peaks: The Return makes this connection more explicit than ever, breaking with its (admittedly loose) narrative to include scenes of the detonation of the first atomic bomb. Here misogyny overlaps with foundational evil, with machismo and colonialism and war. In Fire Walk With Me, Laura takes drugs, cheats on her boyfriend and has sex with strangers, but is no less a victim for it. In The Return the women of Twin Peaks wear multiple faces, and the hero, Dale Cooper, has ruptured into two separate roles – a harmless, naive suburban father named Dougie, and his evil, leather jacket-wearing doppelganger, a killer and a rapist.

The prospect of redemption, not outside but through the Dead Girl trope, is a fascinating one, yet it’s a possibility Dead Girls does not consider. Perhaps it’s pessimistic, or boringly reformist, but The Return asks us to come to terms with this lingering darkness, rather than to dismiss it entirely. I think of Laura Palmer staggering across the red room, smiling, whispering in the ear of the man who wants to save her. I like to think she’s telling him the punchline, that dead girls are human after all.

Roisin Kiberd has written essays and features for the Stinging Fly, the Dublin Review, Winter Papers, the White Review, the Guardian and Vice, among other places. Her first book, The Disconnect: A Personal Journey Through the Internet was published by Serpent's Tail in 2021.