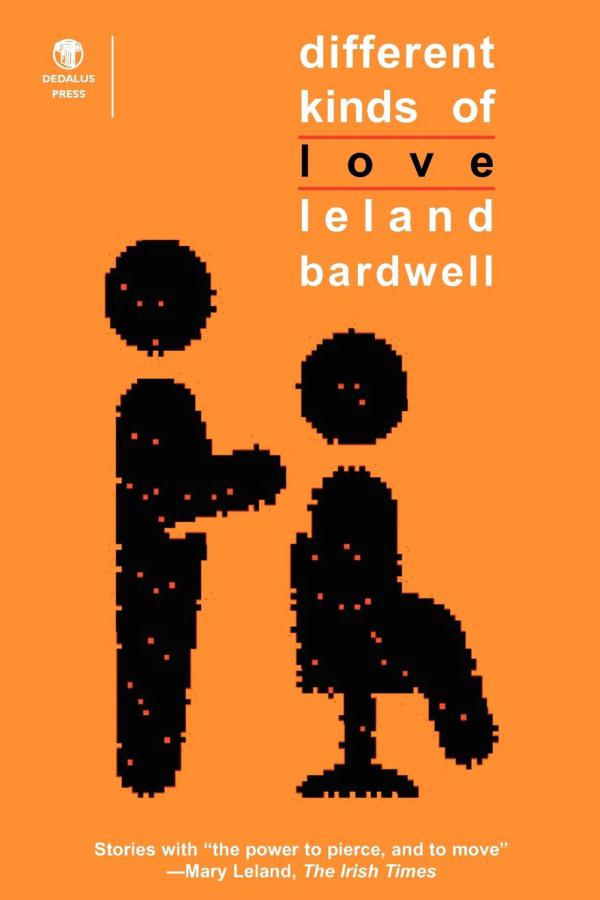 Different Kinds of Love / Mentioning The War: Essays and Reviews 1999-2011

In ‘Cedric Dear’, from Leland Bardwell’s recently reissued collection of short stories Different Kinds of Love, the narrator is said to ‘remember a line of Whitman’s’ in the moments after his father’s death. Seeing his ‘entire childhood collection’ of books ‘thrown together higgledy-piggledy’ on his father’s book-shelves, he recalls ‘I am your voice—it was tied in you—in me it begins to talk’ before feeling ‘a great blanket of fatigue lying heavily’ over him. In this moment Bardwell summarises something important not just about her story’s central character but also about her own work. For one thing, it points to her incisive interest in modern literature—Bardwell frequently alludes to other writers in her fiction—but it also provides a key for understanding the broader ethical and socio-political motivations of her writing. In ‘Song of Myself’ Walt Whitman wrote of his work:

I do not say these things for a dollar, or to fill up the time while I wait for a boat;
It is you talking just as much as myself—I act as the tongue of you;
Tied in your mouth, in mine it begins to be loosen’d.

Equally, in the stories of Different Kinds of Love Leland Bardwell speaks for those who cannot speak, or have not yet spoken, for themselves. A great deal has changed in Ireland since the collection was first published by the Attic Press twenty-five years ago, especially in relation to Irish society’s acknowledgement of various kinds of abuse against children and women, but Bardwell’s work still performs crucial acts of ventriloquism on the part of those who remain culturally and socially marginalised, and especially those who do not have access to support and assistance because of economic disadvantage.

One of the things that is particularly noteworthy about this collection, then, is the way that it moves skilfully between different voices and personae. The narrator of ‘Cedric Dear’ is a middle-aged, middle class scholar from south County Dublin, but in other stories we hear radically dissimilar voices speaking, from the anguished cries of children living under the tyranny of a brutally abusive father in ‘The Dove of Peace’ to the hard-hitting realism of the women whose experiences as mothers, wives or lovers (gay and straight) are described in different ways in, for example, ‘The Launching’, ‘Euston’, ‘The Hairdresser’ and ‘Conversations With and Around a Madman’. This last piece is not listed in the collection’s table of contents—which, annoyingly, doesn’t correspond to the book’s pagination after the third story—but overall this volume attests to the lasting power and importance of Bardwell’s voice and vision in contemporary Irish writing. In ‘Conversations With and Around a Madman’, indeed, one feels that not much has changed in Ireland since the nineteen-eighties and Bardwell’s work fills in important gaps in the nation’s disturbed and disturbing social and cultural sense of itself now as much as then. ‘There’s a hole in my memory’ begins ‘The Dove of Peace’, the collection’s opening story, but throughout Different Kinds of Love Bardwell does as much if not more to expose the different kinds of moral violence and corruption that have bedevilled the Irish state since its foundation than the thousands of pages printed in recent years by the Moriarty and Mahon Tribunals. Her description of a housing estate where ‘water ran freely into the residents’ gardens and rotted the foundations of the houses’ in ‘The Hairdresser’ appears to speak to a time before the birth of the so-called ‘Celtic Tiger’, but its more recent significance is clear. Different Kinds of Love was first published in 1987, the year when Bertie Ahern became a Minister for the first time in a government led by his mentor, Charles J. Haughey, but the story of the Teflon Taoiseach’s self-emolument throughout his period in power is less important, ultimately, than the stories of painstaking self-empowerment Leland Bardwell tells in this collection.

On the last page of Different Kinds of Love a line of verse from the work of Federico García Lorca comes into the mind of one of Bardwell’s characters:

‘It will be the black water,’ she whispered to herself.
Something, a poem of Lorca’s long forgotten had shred a line into her memory. Her footsteps rang out on the wide expanse of abandoned pier. A Russian Scientific ship had sailed off from her today and all was empty now, the ocean dark and peaceful.
She whispered again, ‘It will be the black water.’

The book’s closing image of the character looking into the dark water is deeply suggestive. Indeed, together with the earlier reference to Whitman in ‘Cedric Dear’ it calls to mind Allen Ginsberg’s pairing of Whitman and Lorca in ‘A Supermarket in California’, which also ends with an image of ‘black water’ in the form of ‘the black waters of Lethe.’ The strategic confluence of images and allusions here and elsewhere in her work allows Bardwell to be seen as part of what might be called an Irish Beat literary renaissance in the nineteen-sixties, along with poets such as Pearse Hutchinson and Patrick Galvin and, a little later, Macdara Woods, Michael Hartnett, James Liddy and Paul Durcan. These poets’ frequent deployment of open forms of expression, their attention to the experience of marginal identities and various forms of political oppression—not to mention their own personal knowledge of different kinds of breakdown and dispossession—suggest grounds for fruitful comparison with American contemporaries such as Ginsberg and other artists associated with the Beat movement of the nineteen-fifties and sixties in the United States. Turning to more recent developments in Irish literary culture, in fact, it is useful to think of poets such as Kevin Higgins, Dave Lordan, Elaine Feeney, and Sarah Clancy as the inheritors of this extremely diverse and largely non-academic Southern Irish poetic culture over the last few years—a cultural context that has received significantly less critical consideration to date than its Northern Irish counterpart.

Kevin Higgins’ interest in the performative and political aspects of poetic practice certainly owes something to the combined efforts of writers such as Galvin and Durcan before him, and the public impulse of his work is reinforced by the essays and shorter prose pieces collected in Mentioning the War: Essays and Reviews, 1999-2011. As the title suggests, Higgins’ work—like Bardwell’s, in this respect—seeks to discuss things that are often not given broad or open coverage, and in this collection he writes with equal critical insight about literary as well as political matters, regardless of their current cultural status, currency, or standing. An essay on George Orwell is followed by a piece on Elaine Feeney, which in turn gives way to reviews of books about the corrupt banker Seán Fitzpatrick and the Corrib gas pipeline controversy. Literary criticism and political/social commentary appear side by side in a book that demonstrates Higgins’ clear commitment to the value of the written word. Indeed, the contents of Mentioning the War are drawn from a diverse array of publications, including literary magazines and periodicals in Ireland, the UK, Canada, and Australia, but also from publications such as The Journal of the Galway Archaeological and Historical Society and the Albanian newspapers Ndryshe and Shekulli, demonstrating both the high regard with which Higgins’ work is held internationally and the transnational range and reach of his interests.

In an essay on the Russian poet Marina Tsvetaeva’s prose, Joseph Brodsky wrote:

What does a writer of prose learn from poetry? The dependence of a word’s specific gravity on context, focused thinking, omission of the self-evident, the dangers that lurk within an elevated state of mind. And what does the poet learn from prose? Not much: attention to detail, the use of common parlance and bureaucratese, and, in rare instances, compositional know-how (the best teacher of which is music). All three of these, however, can be gleaned from the experience of poetry itself (especially from Renaissance poetry), and theoretically—but only theoretically—a poet can get along without prose.

Kevin Higgins, like Leland Bardwell, is a poet first and foremost, but he did not need to write prose to learn the things flagged here by Brodsky. His essays, like his poems, attend with great care to relevant details, just as his political and cultural observations are often informed by actual experience and insight. As he puts it in an interview included in this collection but first published in 2009: ‘The writers I am always interested in are those who see everything in the world as their subject, and ruthlessly write the truth as they see it, come what may. Far better to do this than become a yes man or woman for this or that popular front.’ The breadth of topics discussed in Mentioning the War, coupled with Higgins’ intelligence and candour as a social, cultural, and literary critic, make this an indispensable volume, not just to readers interested in contemporary Irish poetry but to anyone interested in the current political, cultural and social climate. Including illuminating introductory pieces by Darrell Kavanagh and John Goodby, Mentioning the War reproduces some of the work published in Higgins’ earlier volume Poetry, Politics & Dorothy Gone Horribly Astray (Lapwing Press, 2006). Like Bardwell’s Different Kinds of Love, however, the pieces reprinted here retain all of the urgency of their earlier occasions. A poet may get along without prose, but no reader interested in the state of contemporary Irish poetry or culture can afford to ignore the interventions made by Bardwell and Higgins in these very different but immensely valuable prose collections.

Philip Coleman is an Associate Professor in the School of English and a Fellow of Trinity College Dublin, Ireland. His most recent books are John Berryman: Centenary Essays (co-edited with Peter Campion, 2017)and George Saunders: Critical Essays (co-edited with Steve Gronert Ellerhoff, 2017). Other recent publications include Critical Insights: David Foster Wallace (2015),John Berryman’s Public Vision: re-locating 'the scene of disorder' (2014), and Berryman’s Fate: A Centenary Celebration in Verse (2014). With Calista McRae, he isediting a selection of John Berryman’s literary correspondence for Harvard University Press. He has essays on a wide range of topics forthcoming in volumes to be published by Edinburgh University Press, Wesleyan University Press, the Modern Language Association and Routledge.

Listening to Kings of Convenience