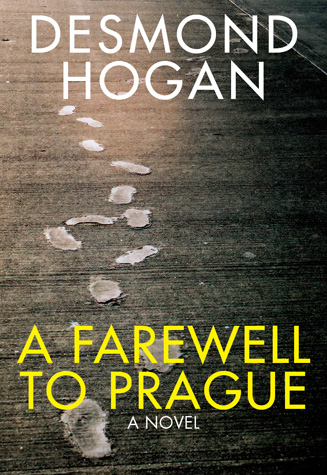 A Farewell to Prague / The Ikon Maker

The phrase ‘experimental novel’ can sound arid, forbidding, or even—ironically—old-fashioned. And yet all novels ought to be experiments, in the sense that, in pursuing impact and intensity, a novelist should devise a personalised form that will permit the least possible distance between what he wants to say and his manner of saying it. Such a form, in Milan Kundera’s words, will relieve the author from having ‘to stray by even a single line from what he cares about, what fascinates him.’ The most interesting novelists have always been experimenters in this Kunderan sense—many of them have also been the most readable.

A Farewell to Prague, written by the once-feted Irish author Desmond Hogan in the 1990s and now republished by the Dalkey Archive (also responsible for saving another revelatory Irish novel, Aidan Higgins’ sun-drenched Balcony of Europe, from oblivion) is just such an experimental novel—insofar as it is a novel at all. Little in this book feels like fiction. The narrator, Desmond, resembles the author in all key respects; every page is infused with the aura of lived experience and the poignancy of a real, vanished past.

The story is simple. Desmond, an Irish writer, suffers a breakdown catalysed by his sexual humiliation at the hands of a Dublin girl who tells him, ‘You are incapable of having full sexual relations with women except with Eleanor.’ (Eleanor being Desmond’s lost love, another restless spirit whose wanderings are weaved through the fragmentary, a-chronological pages of his own travelogue.) Close to suicide, having ‘lost what was most precious to me—flow,’ Desmond leaves the ‘narrow-mindedness’ and ‘tribalism’ of Ireland and wanders the world, drifting from city to city, registering the people he meets and the places he sees in quietly powerful prose. No matter how far he travels—out into the world or deep into his memories—the sexual trauma is replayed obsessively, hardening his sense of exile. (A near-identical scene of humiliation occurs in Hogan’s short story, ‘Lebanon Lodge’, and is also alluded to in his non-fiction.)

There are similarities to the books of WG Sebald: a haunted narrator roams a spectral post-war Europe (and beyond, in Hogan’s case), his private trauma a fissure through which the ultimate traumas of war and genocide pour in. The great continental upheavals, though, are evoked only obliquely, through the detritus of Desmond’s consciousness. There is little in the way of authorial comment or handwringing. As he encounters tinkers, Jews, gays and exiles, the narrator’s sympathy for the persecuted feels instinctive rather than ideological or vainglorious. The prose is polished clean of the boredoms of moralising and the delusions of judgement. The effect—cumulative and quiet—is one of softening, sensitisation.

More than an immersion in the horrors of a century, though, A Farewell to Prague is an existential questioning, a book that embodies, without fully resolving, the doubts and pain from which it must have arisen, which are related to transience and the insubstantiality of experience. A great traveller from a generation which came of age before that was a commonplace, Hogan composes a rich tissue of a life’s heightened moments: far-off cities and landscapes; lovers (male and female) and the rooms where he lay with them; dawns seen from squatted high-rises in Paris, London or Berlin; encounters with friends now lost to madness, suicide, or some banal happiness. Yet as these moments are presented, one after another, we come to feel that the very act of transcription only underscores their evanescence. Hogan holds each memory up to contemplate it one last time before it tumbles into oblivion. Experience leaves no trace, bar some ink markings on a page. Though the prose is restrained and unsentimental, the tone is unceasingly elegiac, often piercingly sad, with death and oblivion alighting everywhere like mist. Hogan writes as if to acknowledge the futility of even the most intensely lived, well-travelled life. His densely layered memories—cities, people, years bleed together in the same paragraph or even the same sentence—move us to mourn our own vanishing lives, the cities we have passed through and the faces we will never see again. ‘Missing someone, someone’s face,’ he reflects, ‘is like missing a country, the sky of another country.’

And this, it seems for most of the book, is all that Hogan is offering: a monument to evanescence. Yet as the memories continue to pass like the landscape outside a train window, a kind of novelistic structure does emerge. Through his wandering, Desmond gains perspective on his trauma, and on the bitterness that had threatened to consume him. He manages to rescue something small, bright and fragile within himself by forging a faith based on kindness and love. ‘I looked towards the country of childhood when I’d had a soul,’ he says, ‘and realised it was possible to get souls back, but only through long journeys, inner and maybe outer.’ Following the death by AIDS of a lover named Markel (their relationship is depicted with great tenderness), Desmond tells himself that ‘the only real way to fight evil is not prayer but to hold someone’s hand.’ The evil that has shattered Europe is the same evil that howls through Desmond’s psychic wounds, and which also dwells, he admits, in his own heart; the fight for love is the fight against fascism, against the hatred of gay people or foreign races, against a world lost to heartlessness and cruelty.

At one point, the Russian film-maker Andrei Tarkovsky is invoked as a ‘modern ikon maker… who’d given meaning to our arid age.’ The invocation is apt: Desmond is a brother in spirit to Tarkovsky’s Stalker, who tells us that some truths are knowable only to the wretched, the broken, the bereft of hope. A melancholy refrain blows through this Zone-like narrative-in-ruins: ‘Once hit by it, you are haunted forever.’ Healing, it seems, is never total. The drowning may glimpse something sacred, but they drown nonetheless.

For all its tonal charisma, A Farewell to Prague, like so many novels, does drag on a bit. Impressions and anecdotes grow indistinct through accumulation—the mind wanders. Not so with The Ikon Maker, Hogan’s first novel, also newly republished. This slim, linear story is perhaps a better introduction to the resurgent Hogan, particularly for readers craving the pleasures of more familiarly structured fiction.

Hogan wrote The Ikon Maker in his mid-twenties, yet the voice here is fully-formed—clear, strong, and precociously wise. Susan O’Hallrahan is the widowed mother of a loving, otherworldly son, Diarmaid, who takes solitary walks in the Galway countryside where they live together, and constructs ‘ikons’ of feathers, beads, and paper. Susan feels guilty when she sends Diarmaid off to boarding school; her guilt is compounded when a bullied boy with whom Diarmaid has formed an intense, homoerotic friendship, hangs himself from a tree. Returning to Galway, Diarmaid has grown distant from his mother; he broods and is ‘unsatisfied with authority’. Defying his mother’s wish that he study at Galway University, Diarmaid moves to London, where he becomes a hippy, rejecting the mores of Ireland. Lacking a lover, Susan becomes ‘obsessed’ with her son; the simmering eroticism in their relationship is drawn with arresting candour and intimacy—at one point she sniffs the crotch of his pyjamas, enchanted by the smell of his pubic hair. She is sexually drawn to beautiful young men whose bodies remind her of Diarmaid’s. When Diarmaid drops out of contact altogether, Susan embarks on a trip to England in search of him. Encountering his friends and lovers, she is forced to realise that her son is homosexual, and that, made hard and bitter by Ireland, he has embraced the brutality of Republican terrorism.

Like Colm Tóibín’s Brooklyn, The Ikon Maker is gracefully told from the perspective of a complex, strong-minded, rural Irish woman. The portraiture of both Susan and her son is compelling. Moreover, this story of inter-generational alienation captures Ireland at a fascinating moment of transition, awakening from the millennial slumber of a cruel and dreary religion to a disorientating modernity (symbolised here by the ‘ape-like’ face of Mick Jagger, whose poster Diarmaid pins up over his bed.) The old Ireland is fading fast—a vignette in the epilogue recounts how a priest seduces and impregnates a young girl, triggering a generalised crisis of faith, ‘a whole conviction gone astray… Christ looking rather numb and insane on the cross.’ Yet Susan, for one, cannot place much hope in the post-national youth culture that floods in through television and radio to fill the vacuum.

Only occasionally does the young Hogan display signs of immaturity or resort to melodrama (as in the final third of the book, wherein almost every page sees someone or other weeping, often ‘with total abandon.’) The flaws are inconsequential: The Ikon Maker is an uncommon, powerful novel, a portal in which we can fathom the trauma of our hunched, tight, beaten-down little island.

Words to Form my Mother