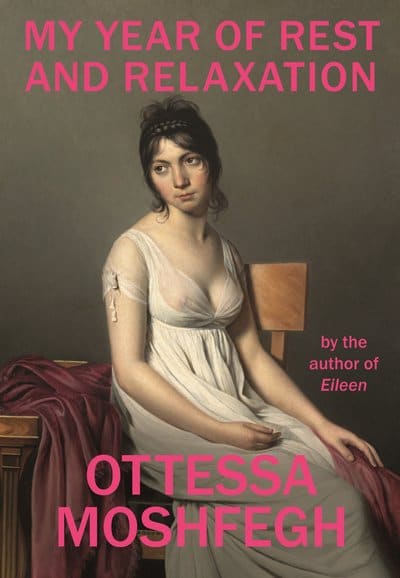 My Year of Rest and Relaxation

My favourite moment in Mary Gaitskill’s novel Veronica comes early. Eccentric, middle-aged Veronica asks the narrator Alison, young and beautiful, how she got into modelling to which Alison responds, ‘By fucking a nobody catalog agent who grabbed my crotch.’ It’s hard to know what Alison’s aim is here. To embarrass the older woman? To elicit her sympathy? To disgust her? To impress her with her sexual availability? What exactly does she want her to do—clap? Hold her hand? Perhaps she simply doesn’t care; she considers Veronica far beneath her. Whatever reaction Alison is looking for, she doesn’t get it. Instead Veronica turns around and says, ‘Every pretty girl has a story like that…but prettiness is always about pleasing people. When you stop being pretty, you don’t have to do that anymore. I don’t have to do that anymore. It’s my show now.’ In a few short sentences, Veronica exposes the weak desire, the neediness, under Alison’s pretend cool. She destroys her reality. Who’s actually pathetic? Who’s the loser here? At the end of their exchange, Alison concludes, ‘Imagine ten pictures of this conversation. In nine of them, she’s the fool and I’m the person who has something. But in the tenth, I’m the fool and it’s her show now. For a second, that was the picture I saw.’ This is a particularly difficult switcheroo—taking the power away from the narrator, granting the ridiculous, comic figure the upper-hand, destabilising all we’ve encountered before—and Gaitskill is an expert at it. Charlie Kaufman manages it in Anomalisa. And Ottessa Moshfegh pulls it off on the last page of her recent novel My Year of Rest and Relaxation.

Moshfegh’s second novel (following on from Booker-shortlisted Eileen) arrives on a wave of publicity, self-aggrandising quotes, an impressive knowledge of the oeuvre of Whoopi Goldberg and a general sense of a ‘moment.’ Moshfegh is, to put it mildly, assured of her talent. It’s her show now. This level of swagger, which I would find unbearable if I was confronted with it in life, I find fascinating in interviews. I appreciate her willingness to go off-script. There is the sense that she is skewering the very idea of a rigid, carefully maintained public self. She talks a big game. Well, as she proves again with My Year of Rest and Relaxation, she is good at her job.

The premise is simple. The narrator—wealthy, attractive, adrift in a pre-9/11 New York, still reluctantly grieving after the deaths of both of her parents—decides to take enough prescription drugs so that she will sleep for a year; an act of extreme self-care. She is ‘plagued with misery, anxiety, a wish to escape the prison of my mind and body.’ She is like all of us, basically. When the year is finished, and she emerges from the cocoon of her apartment, she will be reborn and free from her thoughts which are, safe to say, less than charitable. She is, at her best, narcissistic, solipsistic, completely intolerant and spits bile at an almost competitive rate (When her best friend, Reva, admits that she would rather commit suicide than be without her married lover Ken, the narrator acerbically responds, ‘At least you have options.’) She bleeds disdain. If this was your consciousness you would want out too.

She is diagnosable, but with what? It doesn’t matter because, in the city directory, she finds Dr. Tuttle, a hilariously unhinged and weird creation willing to prescribe her anything she wants, including a drug called Infermiterol which induces long periods of blackouts. In many ways, My Year of Rest and Relaxation is structured like a blackout; the haziness, the confusion, the dark, the lapses of time and, finally, the sickening surprise of light. Things (slightly) pick up pace when Ping-Xi, a modern artist from the gallery where the narrator is unceremoniously fired, takes an interest in her project. He makes her still, sleeping body, her prone form, his muse. If nothing else this allows Moshfegh to turn her merciless eye, that caustic gaze, to the New York art scene: ‘Stacey Bloom had started a magazine called Kun(s)t, about women in the arts, mostly profiles of rich art party girls who were starting their own fashion lines or opening galleries or nightclubs or starring in indie movies. Her father was the president of Citibank.’

My Year of Rest and Relaxation isn’t strictly working within a genre, and casually disrupting the rules as Moshfegh did in noir anti-thriller Eileen, but it has a recognisable set-up: single girlfriends trying to make it in the big city. Think Rona Jaffe’s Best of Everything or, because Moshfegh freely admits she prefers even a bad film to a good book, Working Girl (which is referenced) or Claudia Weill’s Girlfriends. The narrator and Reva, sit around her expensive city apartment and, as sleeping beauty discreetly shovels down truckloads of pills, Reva waffles on about her weight, her job, her mother’s illness. It’s brunch, except one of the participants is deranged. Of Reva the narrator says: ‘Since I’d known her, the drone of what-ifs, the seemingly endless descriptions of her delusional romantic projections had become a kind of lullaby.’ Still, her friend stays as men move in and out of their orbit. Reva’s boss Ken, with whom she is having an affair, brings his wife to her mother’s funeral. The narrator is in an on-and-off ‘relationship’ with an older Wall Street type called Trevor and, even by her own deplorable standards, Moshfegh outdoes herself here. The darkest comedy is derived from Trevor’s ability to easily use his girlfriend, and his subsequent, hapless attempts to rehabilitate himself with worthier women. ‘I’m with Cecelia now,’ he says, ‘her son is autistic.’

My Year of Rest and Relaxation—despite what could be initially perceived as a lack of compassion, its obvious Bret Easton Ellis influences and top, thin layer of scum-coated prose—is a soft, feminine book. The only relationships of consequence are those the narrator has with her mother and Reva. Her mother, a bedroom drunk so unfeeling she makes Joan Crawford look maternalistic, is the person she desires a scrap of affection from. When she imagines the end of her relationship with Reva, she sees it like a break-up, one that actually hurts. She would leave her a farewell note: ‘I tried to think of the worst thing I could say about a person? What was the worst, most cutting, truest thing? Was it worth saying?’ Love and hate are two birds in the same cage, flapping-around, bumping into each other. Moshfegh is suggesting that this coldness and shutting-down, both mentally and, later, physically, is the only appropriate response to a shallow and materialistic world that has allowed the narrator to glide. At one point, Reva is questioned about her obsession with her appearance, told that it’s not a contest. ‘Yes, it is,’ Reva responds, ‘You just can’t see it because you’ve always been the winner.’ Like Veronica, she too can bite back. In a blackout, the narrator orders lingerie, books beauty appointments, sexts strangers online. Even in her sleeping state, vanity persists. The world doesn’t want her fully awake—living, doing, feeling, making-up her own mind. Like Ping-Xi, it only requires her body. Why would she care? Why would she try? Everything is already available to her.

Much of the comedy, depending on your sense of humour, in Rest & Relaxation comes from vanity, particularly Reva’s. Reva’s basicness—her happy hours, her half-baked wellness philosophies—allow the narrator to feel a sense of superiority. Reva with her trite, second-hand speech at her mother’s funeral; Reva with her sad affair and abortion; Reva in her Victoria’s Secret lingerie. Isn’t she stupid? Isn’t the narrator—and by extension, us—so much smarter, so much better? Just when you start to agree, just when you come round, Moshfegh wrong-foots you. This narrator isn’t interesting or tough; she never was. She’s a twenty-five year old orphan with only one person who cares about her. Everyone alive wants to feel tougher than they are. Everyone wants to feel indestructible. Moshfegh proves, on the last page, what we already know: that we’re not. At one point the narrator thinks, ‘Reva was a pioneer; she was the only friend who had ever really dared to try to know me.’ Reva takes the leap.

The narrator’s final assessment of Reva is a singular moment of tenderness: ‘She was beautiful, with all her nerves and her complicated, circuitous feelings and contradictions and fears.’ It’s almost an exact mirror of Alison’s last judgement of Veronica. ‘That you’re beautiful,’ Alison responds, when Veronica asks what she is thinking, ’that not everyone could see it. That I almost became the kind of person who could not.’ Moshfegh isn’t a nihilist, or a shock-merchant, or she isn’t either of those things in a boring way. She is asking a lot of questions. How do you love after you’ve been badly hurt? Why are we all so conformist and status-seeking? How do you circumnavigate all that’s been dully ingrained—taste, style, all those markers, all that silliness—to do the worthwhile work of actually knowing someone? Like Veronica, My Year of Rest and Relaxation is, at it’s strange, cold heart, a friendship story. Brutal, unexpected and unfit for the world, but a friendship all the same.

I dream of being a robot in Labrador City