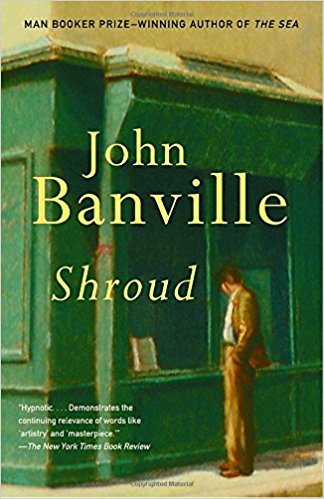 It takes a Nabokov to create a Humbert and it takes a Banville to make a Professor Axel Vander – an articulate intellectual character, constantly muttering caustic asides as he shuffles through the world. Vander doesn’t invite sympathy but he is an engaging old nut. He likes to shake his walking stick at people who annoy him. And he is a complete fake, and rather vain about it. He does not mean anything he has said in his celebrated works and nothing he has said means anything. This intellectual con man who has outsmarted the smarts is not – as they say in the philosophising business – authentic. It is his nature, if in a fix, to shed his skin and wriggle on.

But it’s not all for laughs. The novel opens with Vander receiving a letter from Europe from a woman who intimates she knows something unsavoury about his past. It transpires that he is a Jew who jettisoned his inconvenient baggage-loaded family and race, flirted with Nazism (for fun as much as anything) and ended up recreating himself, post-Holocaust, in the New World.

Late in the novel we get a description of Harlequin, one of the stock characters of traditional Italian comedy, a personality Vander associates himself with:

He is called by many names, and no-one can say which was rightfully and originally his… He is without doubt of divine essence, if not, indeed, Mercury himself, god of twilight and the wind, the patron of thieves and panders… His black half-mask completes the impression of something strange and fiendish, suggesting a cat, a satyr, an executioner… Consider how he is viewed by public opinion, and try to conceive, if you can, how he could ignore this opinion or confront it… Is this a man? Yes. God receives him in his shrines and allows him to pray. He is not a criminal and yet no tongue would say of him that he is virtuous, that he is honest, that he is admirable. No moral praise seems appropriate for him, since this would suppose a relation with other human beings, and he has none.

Vander’s desire to keep a grip on the mask takes him to Turin, for a confrontation with Cass Cleave, the young woman who has researched his past. Turin is an apt setting for the unravelling of a tale which plays with the ideas of identity, biography, and authenticity. Turin is an arcaded and aristocratic city yet unblighted by sightseers; it is anonymous, neither Mediterranean nor Alpine, a place unregistered in literature. Yet Turin hosts the celebrated shroud of the crucified Christ, a relic which Vander described as the world’s oldest self-portrait. (Though, he might have added, exposed in the end as a fake.) Once you believe in a story as strange and powerful as the Resurrection, a shroud is not evidence, but illustration. The intimation is clear: the attractive power of a story has nothing to do with its literal verity. Turin is also the city where Nietzsche – the philosopher of the individual will – went insane and died. (And also the birthplace of Primo Levi, survivor and chronicler of the Nazi death camps, though Banville doesn’t mention this.)

Implausibly, the old satyr tups his would-be biographer – explicable perhaps by the fact that she’s completely mad – and Vander’s history unfolds to the reader, and to himself, coloured by his consciousness that ‘I can not really rid myself of the conviction of an enduring core of selfhood’ and a notion that ‘I am being given one more chance to redeem myself.’ There is a nod to Rousseau:
Vander just has to confess how naughty he is. And, of course, how clever. ‘If it had been a work of art I was fashioning they would have applauded my mastery. Perhaps that was my mistake, to do it all in secret, instead of openly, with a flourish.’

Not much happens in the conventional sense, but that’s the kind of novel it is: wordy, intricate and allusive, with Cass Cleave going definitively off her unstable rocker and Vander himself experiencing visions and flashbacks and engaging in an increasingly erratic and frantic dialogue with himself.

Shroud is composed of pieces which, after much meandering, add up less to any final meaning than to a journey into disorientation. The book brims with false clues, arrows pointing nowhere and details which are more vivid for the sense of confusion they impart than for what they mean. For example, early in the book Vander meets a vivid and incomprehensible character in a cafe, and just because he is so vivid and incomprehensible we feel sure that we will meet him again:

‘A clownish and carrot-haired fellow wearing an illfitting, loud checked blazer and a bright yellow shirt with a soiled collar, the wide wings of which were spread flat over the lapels of his blazer, who kept glancing surreptitiously in my direction with a faint elusive leer.’

Carrot Head follows Vander into the street, babbling insistently in an obscure dialect and gesturing, and doesn’t give up until Vander shakes his walking stick at him. This promise is satisfied late in the story, when Carrot Head reappears. But the same pantomime is enacted and we are left none the wiser. Carrot Head, White Rabbit, red herring. Vander is like Alice down the rabbit hole, and all you can do is wander along after.

While a book for those who’ve been to college, it is not its intellectual acrobatics which sustains Shroud, and still less the plot. Its strength is the playfulness of the prose, the richness and oddity of the descriptions, and a narrator who makes beautiful sentences seem effortless. Banville has a knack for the apt word which springs a sound or image to clear and startling life. This talent for the evocation of simple things is the real joy of reading Banville.

There are times it all verges on being a bit too rich, and you yearn for an object or action to be simply itself, rather than pregnant and bristling with meaning. Had this been presented to as a first novel you could imagine an assertive editor saying, ‘Great stuff, but some of those paragraphs aren’t paying the rent. Let’s make it a little leaner.’ The sections related from Cass Cleave’s perspective, for example, contain a little too much fruit and nut and have none of the acid sharpness of Vander’s observations.

There is a sense that Banville is having a fine time enjoying his intellectual virtuosity and verbal fluencywhich reminds at times of Nabokov and – I dare to say it – the much more flippant Updike. The language so often hops and skips with the joy of a maker making. But while comparing this to that have a look at Nabokov’s fevered Humbert, addressed by a voice in the dark at the hotel where he plots the deflowering of his Lolita:

Fast forward to Turin. Vander has disposed of his spouse and is in the company of a young thing who he claims is his biographer.

Bartoli and Kristina Kovacs were … sitting very still, very straight, like a pair of magistrates, their hands folded before them on the table … ‘I know you killed your wife,’ Franco Bartoli said. I coughed, spluttering grappa. ‘What?’ I croaked, gagging. ‘What?’ Kristina Kovacs patted me solicitously on the back. ‘He says,’ she said, ‘you dropped your knife.’

Gags echoing through the literature of the post-Christian world. God is dead, the shroud’s a fake, everything is permitted. And yet it’s not. Something nags the conscience, and the cleverer you’ve been the more it nags. ‘The shame.’ These were the final words of Banville’s confessional tale of murder, The Book of Evidence, and we’re reminded too of the confessional murder tale which is a bold black line between the literature of the nineteenth century and all that has come since Dostoyevsky’s Crime and Punishment. Nietzsche noted that God was dead, Dostoyevsky that we were in difficulties without him.
This story of a man falling apart, trying to salvage something of himself, will take you there intellectually, but it will not break your heart. It’s all so fluent, articulate and clever – you enjoy it too much to feel touched by tragedy. Will it be to your taste? Probably, if you smile at the image of the young Vander, newly arrived in New York, guzzling barbiturates and feverishly writing his first academic work of con-artistry: The Alias as Salient Fact; the Nominative Case in the Quest for Identity.

And then you wonder is the whole exercise a bit of an elaborate put-on, much like Vander himself. Vander, the star guest at a conference in Turin, delivers a learned but offhand address at a university conference. At question time:

A young man at the back of the theatre cleared his throat and asked in an earnest mumble what was, please, Professor Vander’s view on the current state of cultural criticism? I lifted my head high and back and smiled. ‘My view?’ I said. ‘Very fine, from this elevation, thank you.’