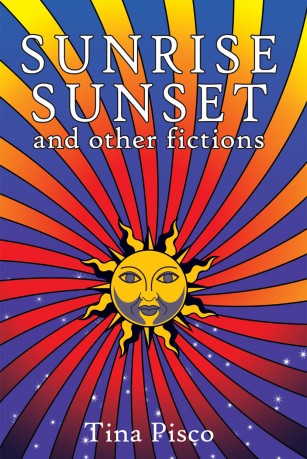 Let’s get the declaration of interest out of the way: I first encountered Tina Pisco at the 2008 West Cork Literary Festival where I heard her read a flash piece. It was knife-sharp; darkly incantatory. Some years later I recommended Pisco to Spolia – an online literary journal in the US. The story Spolia published (‘Erase And Rewind’) features in Sunrise Sunset. While guest-editing the ‘Fear & Fantasy’ issue of this journal, I read another story from the collection (‘The Strip’). I’m declaring this because I am name-checked in Sunrise Sunset’s acknowledgments – for which, thanks. But really, I had nothing to do with the making of these stories. They are all Pisco’s own.

And what a good thing that is.

Like Nuala O’Connor’s recent collection Joyride to Jupiter, one of the pleasures of Sunrise Sunset lies in its variety of both form and content. There are thirteen pieces here, including flash fiction, a graphic story, and a short novella which transposes ‘A Christmas Carol’ to contemporary urban America. The tone shifts too – from unapologetic fantastic-realism (‘Spell Work 101’) through gritty observation (the sublime ‘Declan’s Sister’) to witty borderline-polemic (‘A Carol’s Christmas’). There are stories which grapple with global realpolitik: forced migration, rape, fundamentalist warfare. There are creepy tales of the unexpected. There are coming-of-age narratives set in suburban and not-so-suburban homes. Yet for all its kaleidoscopery, the overall impression is one of coherence: this witch’s broth has been brewed by a singular, intelligent vision.

Coming away from Sunrise Sunset, I was left thinking about cycles: circadian, seasonal, menstrual, life, familial, economic, global – the rise and fall (and rise again) of worlds, inner and outer. This tidal swing and sway is reinforced by Pisco’s recurring motifs: seals, handsome men, lions, cats, birds, heat, the sea, blood, cars, sunrises, sunsets, even names – John and Carol/e. The swirling semantic rhythm reminded me of the great art of the Neolithic: its spirals carved on burial chamber walls, its ceramic figurines of women nursing baby lions. There is an underlying philosophy at work here: almost Buddhist, except it refuses to be named. And perhaps this is Pisco’s greatest strength as a writer – her ability to leave the important things unsaid.

Yet Pisco is never obscure. She understands story: not just the dynamics of each tale, but the art-form itself. Her narratives are full of hints that are seeded, followed-through and brought to satisfying dénouements. She is generous and upfront in referencing her sources: folklore, Dickens, Neil Gaiman (the black cat in Coraline, anyone?).There are oblique nods too to Angela Carter and Daphne du Maurier, particularly in the title story, and the building creepiness of ‘Erase And Rewind’ and the marvellous ‘The Strip’. This means, particularly in the more fantastical pieces, that we catch on very early to what Pisco is at and where the story is going.

This presents a risk, especially with the novella, where the transposition at first feels quite slight – okay, we get the joke, we know what’s coming, so why should we care? But Pisco understands that good transposition needs, sooner or later, to deviate from its source. The writer has to find a story and moral logic that both honours the original and carries the correct weight for the new context. As we delve into ‘A Carol’s Christmas’, we encounter tiny deviations from Dickens and it’s these that make the story most satisfying. We realise that Carol is both Scrooge and the over-extended, bullied Bob Cratchett; this blurring, like print off-set, puts both the original and the new into sharper focus. Pisco also grapples successfully with the time-bomb Dickens left for any adapter – sentimentality. She doesn’t shy away from pulling heartstrings: I, like Carol, had a tear in my eye at her vision of Christmas Future. But Pisco’s Ghost is too sardonic, too wise, too knowing – too modern – to let anyone’s tears flow for long.

Similarly in ‘The Strip’, though we can guess where narrator Ellen is heading, the reveal is written in language so distilled it almost takes the breath away: ‘Ellen knows everything: what the Universe is made of, how time can run backwards, where all the dead souls go, why some choose to stay.’ The pay-off is not epistemophilic, the rush of disclosure. It is poetic; to fully get what Ellen sees in that moment, we have to exercise sympathetic magic – put ourselves in her place and imagine.

Pisco’s prose is assured throughout: never showy yet full of startling images. A woman sits on a bayside deck, illuminated not by moonlight but the glow of her tablet. A ghost prowls through an edit suite, smartphones cables leaking from her rotting corporate suit. The voices of the many narrators are distinct and embodied: smooth, seductive, misleading, self-recriminatory. Every great sentence – and there are many – has the simple, casual, muscular grace of a lioness flicking out her paw to bat at prey.

The range is exhilarating. It’s refreshing to read magical realism that doesn’t make apologies for itself, a mature female voice that’s not pretending to be anything else. At times, the collection feels almost like a guide for living as woman in this complex, compromised world. ‘My body! My choice!’ screams teenage Ruby alone in the woods, terrified by the prospect of how her vegetarian feminist lesbian mother will respond to her first period. What a clever choice, to put a marching slogan into this most personal of places.

Some pieces, however, did leave me wanting. While ‘Four Flashes from the Frontlines’ is taut and convincing, deft in its handling of contrasts, ‘Moon Angel’, which tackles related subject matter, feels less sure – particularly in the chosen point of view and the level of detail around the narrator. Is this a story that could be taken further, I wondered; or was I meant to read it as an exercise in disconnect? ‘Declan’s Sister’ – though a beautiful piece in its own right, redolent of Colin Barrett in its depiction of small-town anomie – made me long for Pisco to write a full-on novel about the young, set in a grotty, post-recession West Cork town.

Because, for all the delights of the fantastical pieces, it is when Pisco turns her attention to the ordinary that this collection slices most profoundly. Her innately magical sensibility blends with realism to create moments that linger, meanings that percolate through the mind once the reading is over. Ruby tying her top around her waist to hide her new blood. Carol/Scrooge hauling wet sheets out of a washing-machine. Rob describing Declan’s desperate Sister as an ‘angel’, in a town where sink estates have ‘mushroomed like fairy rings’. The Strip’s sad raver, Buddha-Boy, smiling to himself as he listens to music only he can hear. And, compellingly, the powerless narrator in ‘Imagine This/Imagine That’, who, in her tiny last line, creates that most magical of storytelling illusions: trifurcating her identity so she is simultaneously herself, the reader, and the author. Leaving us with a reproach which is also a wish, an impossibility which is also a call to arms. That’s a spiral worth engraving on the walls of any burial chamber.

Philosophy of a Fly