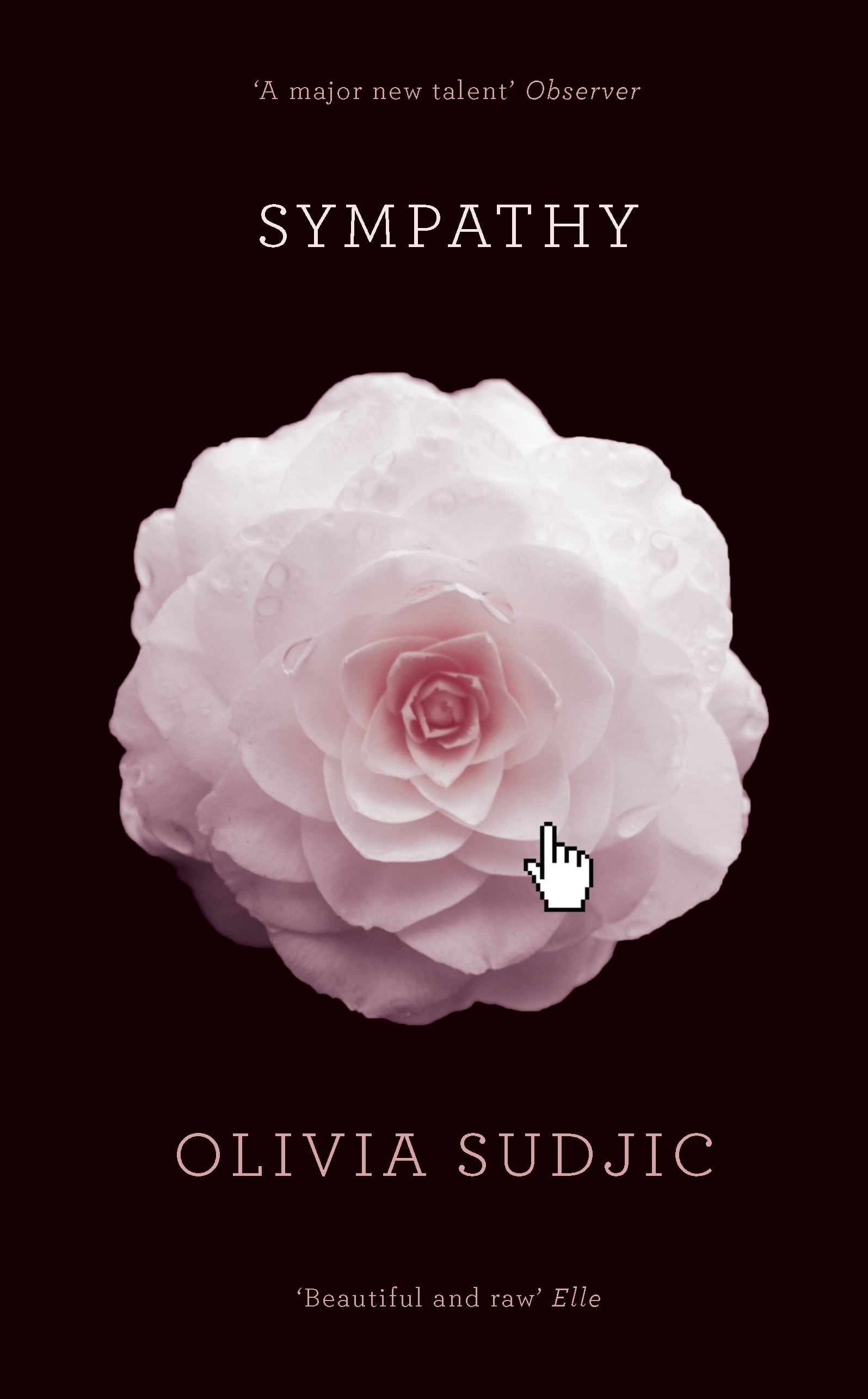 What do our passwords really protect? Hardly information, because a phone or email account can be hacked, and besides, ‘information wants to be free’. Rather, passwords guard the ability to share information, and in this sense, they guard a person’s voice.

Sympathy, a debut novel by Olivia Sudjic, sees its protagonist commandeer another woman’s smartphone, study its contents, and use what she finds there to manipulate its owner into friendship. This leads to infiltrating another’s life, blurring and fusing herself with the object of her obsession, aided throughout by a worrying yet utterly mundane level of intrusion facilitated by social media.

Alice is English, aged twenty-three, newly graduated and “at a loose end”. A self-described “quantum fuck-up”, she leaves behind her adopted mother for New York, arriving at the Manhattan home of her ailing grandmother, Sylvia, who subsists on a diet of vodka and prescription medications and who occasionally mentions her past as a literary critic.

Reserved, though an adept observer and listener, Alice turns her blankness to her advantage. “It can sometimes be good to be plain-looking,” she notes, “because it is a temptation to those who pride themselves on having a good eye”. Alice works her way into the home of Ingrid and Robin Rooiakker, a pair of monochrome, fastidiously tasteful architects, as a minder for their children. She also begins a relationship with Dwight Nutt, a Mormon turned “Innovation Consultant, App Developer and Apiarist”, who speaks in queasy neologisms and whose work includes a new and much-hyped app for facilitating threesomes, called TriMe.

Cultivating a new life for herself, Alice begins a kind of diligent auto-monitoring, using diaries, photographs, lists and diagrams to document days spent wandering New York. Her approach falls somewhere between autobiography and Quantified Self, the movement which strives for ‘self knowledge through numbers’ by using technology to track every detail of their lives. In particular, Alice warms to Instagram as a way to grant her life purpose; her tiny audience provides an excuse to continue exploring and photographing the city. The novel itself neatly mimics the narrative arc of countless Instagram accounts, which, Sudjic observes, “chronicle so many million journeys of self-discovery”.

It is Instagram, also, which leads Alice to the point of her obsession: Mizuko, a Japan-born writer and lecturer known for weaving together personal history with accounts of public tragedy, including the explosion of the Columbia Space Shuttle in 2003, 2011’s Tōhoku earthquake, and the Fukushima Daiichi nuclear accident which followed. Successful, confident and a little bit older (enough to at least appear to have her life together), Mizuko is also addicted to social media. Alice alights on her as a “ beautiful quantum self”, a long-lost twin of another parent and heritage.

Convinced of this newly-forged psychic tie, Alice tracks down Mizuko, engineers a meeting and infiltrates her world, making the first move at a talk about a Japanese hero of the Second World War, Chiune Sugihara, a diplomat who issued visas allowing thousands of Jewish refugees to leave Lithuania. This scene sets a template for what is to follow: solipsism in the face of broader tragedy, set in a narrative which debates the emotional highs of online life and its shortcomings in the off-screen world.

Mizuko justifies writing about her family with the line “You own everything that happens to you.” But is any of this happening to you, or even in front of you? If the ethics of ‘personal’ writing about other people are dubious, then what of the mediated, filtered online life, where the user is encouraged to think of the world as a network formed around them, one which they can alter and edit with an easy click?

Is this a novel about the vain, those so self-involved as to be absent of character? Or is it about the depth of courage, fear and affection we pour into our devices, a feeling beyond sympathy, beyond love, which we habitually channel into our iPhone screens? Can’t it be both? Sudjic is critical yet accepting of technology’s place in her characters’ lives. It is treated as damning yet wholly instinctive: characters employ newsfeeds instead of memory, a camera in place of a mirror, emoji hearts in place of emotions they can physically ‘feel’ and understand.

Sympathy could be scathing and cynical – yet another assassination of millennial vanity and Brooklyn poseurs, and their much maligned fondness for avocado toast. Similarly, it could be gimmick-laden, precious or earnestly defensive and whiny. But it’s not: what makes Sympathy exciting is how it recognises online life as an act of self-fashioning, an active, creative culture not unlike that of personal writing. In Mizuko, the juxtaposition of Instagram with creative non-fiction is foregrounded; both pursuits are deconstructed, at times appearing ethically bankrupt, then revealed–if not exactly redeemed–as an instinctive push against past generations and their reticence. Mizuko says that she values her writing at all costs; she is “prepared to sacrifice friends and family”, but later admits to less noble motives: “It’s how I get back at my mom.” The same could be said of her use of social media: as author, editor and subject she broadcasts a curated version of reality, and when others fail to comply with this narrative she writes them out.

In interviews, Sudjic has described social media as “sympathy-on-steroids”, a medium which offers the reader-follower a chance to lose their self in somebody else’s life, to dwell “on the periphery” of the lives of strangers. The “steroids” here might not be the product of heightened intimacy, but a result of distance: with every image, post and story we consume, we project ourselves onto their subject. Social media breeds apophenia in the user, because everything is indeed connected now, and you are connected too. To the opportunist, or–as with Alice–someone simply so lacking in selfhood as to crave complete escape, this offers a chance to weave oneself, Ripley-like, into another person’s existence – forging connections, predicting their likes and dislikes as accurately as any startup’s algorithm. This goes so far that Alice admits (about Mizuko), “I could regurgitate her opinions from old statuses. I had a memory that went forward in time as well as back.”

As with Ripley, however, the illusion cannot hold for long. What follows is an ominous love song for the emotional cyborg, the technology addict whose heart has flown out of their chest, somehow, to reside in the online ether. The spinning on-screen loading wheel becomes “an instrument of torture”. The blue of the message marked ‘read’ is a “neural pathway” between readers, while an unfollow is an act of masochism and intimate revenge. And sharing, above all, is revealed as hazardous, because the mediated self constantly risks slipping away. Sudjic arrives at a gently disturbing, Cronenberg-y conflation of mind and device: taking Mizuko’s phone in her hand, Alice admits “it felt kind of like holding her brain”.

Online relationships, however one-sided, can very often be all-consuming, and online self-fashioning even more so. What Alice experiences is a combination of the two, as Sympathy reveals how much the love we feel for others, online, depends upon taking. An Instagram feed can suddenly appear as a list of new lives to be appropriated, material for the faceless, the leaching and lonely, as ‘inspo’ to furnish them new bodies, clothing, opinions and ways of seeing. Someone else’s life always looks better, not least when they use filters and know their best angles.

Wired on Provigil and unrequited digital love, Alice consistently fails to connect to her own feelings; she loses the ability to live with immediacy and clarity. But where does solitary humanity live? What part of life remains uncovered by wifi signal? As the novel progresses, Alice begins to grope at a reality she has lost. Time away from devices is prized as restorative, a mark of moral strength. Alice begins to dream of ‘self-cancellation’ through deletion of apps, and scenes appear where technology is destroyed and thrown away in quasi-suicidal ecstasy (the ‘laptop funeral’ is, interestingly, a niche genre of YouTube video). Isolated in Mizuko’s apartment without their phones, dependent on each other at last, Alice says “Left to our own devices, or lack of them, we became a cult, and yet one in which I was never sure which of us was the charismatic leader and which the gullible follower.”

There is a sense of love, here, which only functions at a distance, a sense of there not being enough humanity for Mizuko and Alice to share. Creator and consumer might be equally damned, as lacking and mediation-addled as each other. Sympathy speaks to themes of self-containment and psychic purity similar to those in Catherine Lacey’s “big data dating” parable The Answers, or Alexandra Kleeman’s comparably creepy, gently dystopian You Too Can Have a Body Like Mine.

The narrative leads to a scene with hallucinogenic drugs, which techno-utopian dreamers once believed would, like technology, elevate minds to a common plane. Tripping in a police cell after being rounded up at an illegal rave, Alice experiences another kind of synthetic sympathy, and, abandoning any remaining selfhood, gives Mizuko’s name to the police in place of her own.

It is unsurprising, too, when Mizuko invokes the Shinto concept of ‘Kegare’, a defilement or ‘mixing up’ of elemental forces, which leaves life subtly out of joint. The downside to becoming a cyborg is that you risk losing the natural world, and all its impulsivity. As Sudjic writes, of a phone’s screen in the dark, “the numinous glow was always a false dawn.”

Roisin Kiberd has written essays and features for the Stinging Fly, the Dublin Review, Winter Papers, the White Review, the Guardian and Vice, among other places. Her first book, The Disconnect: A Personal Journey Through the Internet was published by Serpent's Tail in 2021.

Observations upon hearing she was leaving Australia