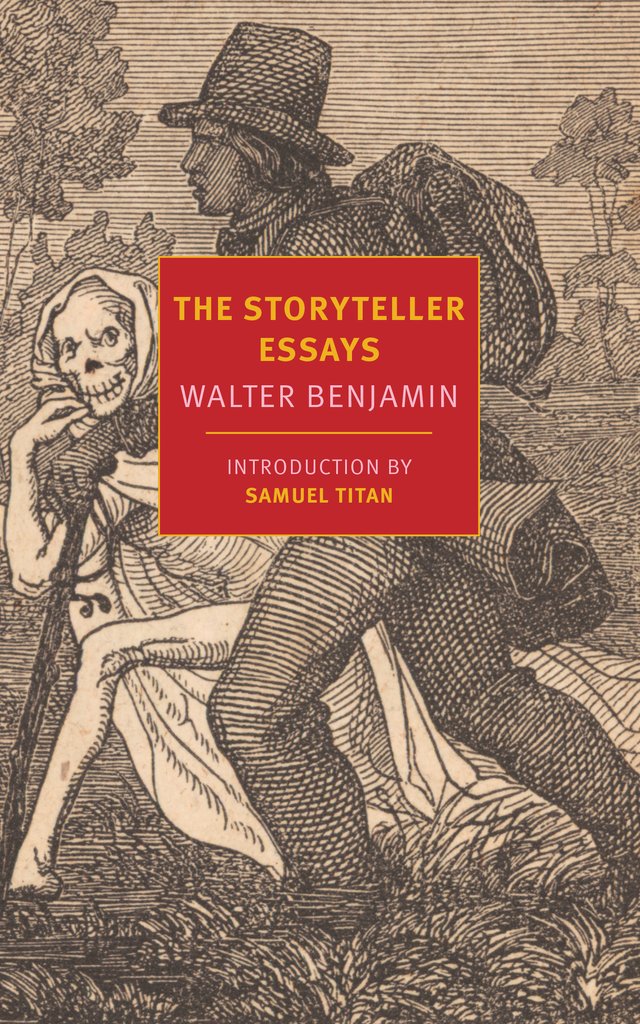 Edited and with an introduction by Samuel Titan

Translated from the German by Tess Lewis

Walter Benjamin died by suicide in 1940, while fleeing the Nazis. The essays collected here were written between 1930 and 1936 and revolve around the stark and simple contention that modern literature – the novel primarily, but the short story too – is not true storytelling but a degenerate form of that craft. Put another way, the literature that preoccupies the intellectuals, the academics and the bourgeoisie is what remains when storytelling loses its way and can no longer perform its essential function of offering guidance and hope.

It is a stark message. But because it is delivered without panic, quietly, in graceful sentences, from within the culture of books and criticism, it is hard at first to accept the implications of what Benjamin is saying. You suspect he is being bombastic in order for him to come back later and tell you what modern literature’s saving grace is, but the moment of redemption does not arrive.

Storytelling, Benjamin explains, is an oral tradition, and is disappearing with the loss of the world that sustained it. Storytelling requires boredom, for one thing: ‘The activities that were secretly and intimately connected with boredom are dying out. And hence a second reason the gift of storytelling is disappearing: people no longer weave or spin, make handicrafts or do woodwork while listening to stories. Another reason, again connected to a change in work, is the death of craftsmanship in the creation of practical objects – things no longer last as they should.’

Reading such claims over eighty years later, we might be reminded that every generation foresees a crisis and the end of the world as we know it. It is also possible that Benjamin had his eyes wide open at the beginning of our era and proved able to observe its salient features. The latest being the handheld device capable of providing permanent audio-visual stimulation and limitless information. Reading has not died, but it is another kind of reading. It is fragmentary, fast and data oriented, and the idea of sitting alone and in silence with a book increasingly looks like a meditative act of renunciation. ‘This process of assimilation [of the story], which takes place deep inside us, requires a state of relaxation that is becoming ever rarer.’

The printing press made the novel possible, the growth of a literate middle class in the 19th century created an audience that could read it, and in this artificial fallen realm the soul of the story passed away. The spoken story, the story a child hears from a parent before going asleep, or the kind of story told whenever people meet to pass the time, belongs to an oral tradition that encompasses myth, legend and the fairy tale. ‘Experience that is passed from one mouth to the next is the source from which all storytellers have drawn. And of those who have written down their stories, the greatest are those whose writing differs least from the speech of the many anonymous storytellers.’

This brings us to the idea that stories are moral creatures. They are moral because they are practical. They orient us in the world. The narrator of a story ‘is a man of good counsel for his audience. But if the expression “of good counsel” has begun to sound old-fashioned to our ears, that is due to the fact that experience is ever less communicable. That is why we ourselves are no longer of good counsel, neither for ourselves nor for others.’

Benjamin’s concern is not the state of the novel, but the state of the world. A coherent story requires a stable, coherent world. We can moan and complain, but we can’t tell a story that does us any good. ‘The reason for this state of affairs is obvious: experience’s stock has fallen in value. And it seems this fall will never end.’ Men returned from the battlefields of the Great War ‘completely mute’, unable to articulate what had befallen them. ‘For experiences have never been refuted more thoroughly than strategic ones were by trench warfare, economic ones by inflation, physical ones by mechanized warfare, ethical ones by the ruling powers.’

Man no longer mediates his experience through the matrix of story, ritual and tradition. The cultural heritage is jettisoned, and the impossible burden of making sense of life belongs to the individual, who is obliged to ‘start again from the beginning, to start fresh, to make do with little, to rebuild with less than nothing and without looking left and right.’

In a world of competing explanations, ideologies, styles and fashions, all the novel can do is express the malaise. The greater novels can articulate it better. Think of Dostoyevski’s Crime and Punishment, where the hero is a rebel, constructing a rationale to test the most basic moral rule there is – the taboo against murder. Or Celine’s Journey to the End of the Night, which begins on a World War One battlefield, then provides a grand tour of the varieties of disillusion so seething and caustic that it is thrilling. (The example of the first author is Benjamin’s, the latter is mine).

Benjamin: ‘The “meaning of life” is, in fact, the centre around which the novel moves. But the search for it is nothing more than the initial expression of perplexity experienced by the reader who sees himself transposed into this written life’.

It is hard now to comprehend the sense of loss felt by one living in Benjamin’s time and place, but it is worth trying. When Benjamin says that we are entering an age of barbarism in which our stories are complaints rather than good counsel, he is not employing a rhetorical device. He is speaking from the epicentre of destruction of a civilisation, with the vacuum filled by fads and fashions, spiritual and artistic, and violent ideologies which exploited new communication technology and widespread literacy to create a mass psychosis. The Great War had not only killed and maimed a generation, it had destroyed the Austro-Hungarian Empire. It put up borders and left behind a patchwork of restless and economically unviable national states. Benjamin (like Joseph Roth, whose novels describe the collapse of this civil space and free fall towards fascism) was a Viennese Jew. And to the east, amid the ruins of the Russian Empire, the Bolsheviks had established their own realm of barbarism.

Moving onwards from where Benjamin lived and died, perhaps storytelling did find voice again, and was able to tell a story, but by then it wasn’t a novel anymore. When Aleksandr Solzhenitsyn published The Gulag Archipelago he sub-titled it ‘An Experiment in Literary Investigation’. His chronicle of the Soviet slave-labour camps was documentary and historical, but it was also a mosaic of personal accounts. For Solzhenitsyn, the idea of ‘literature’ was that it told the truth. It expressed lived experience in the land where no true stories were permitted.

When Solzhenitsyn went to the United States as an exile in the 1970s, he found that his idea of literature was not current among free people. Literature was an intellectual, academic pastime, and aesthetic and semantic complexity was valued. He wrote: ‘In the West nowadays, the colder and more aloof the author, and the more a literary work departs from reality, transforming it into a game… the higher a work is esteemed.’

Perhaps if Benjamin had not killed himself while trying running from the Wehrmacht and had made it to America, and lived long enough, he and Solzhenitsyn might have found something to talk about.