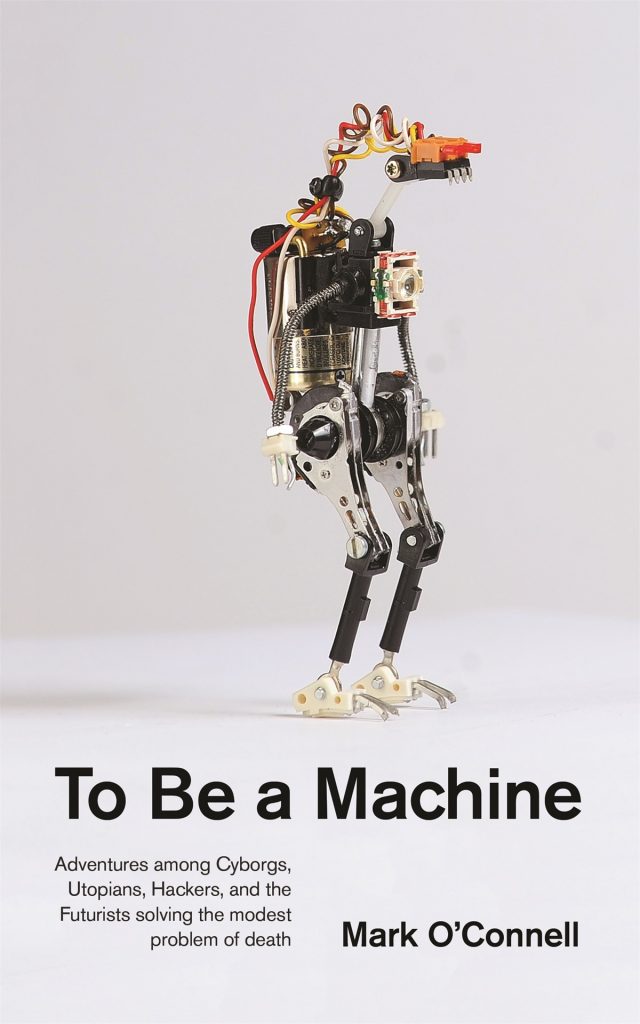 To Be A Machine

It has been clear to me for a while that Mark O’Connell is the outstanding writer of non-fictional prose in Ireland. His work for publications like Slate, The Millions, The New York Times and The Dublin Review has regularly stood shoulder to shoulder with that of such top-flight, older generation book-chatters as Martin Amis or Geoff Dyer (writers on whom O’Connell has previously trained his critical acuity).

To Be a Machine, O’Connell’s book exploring the transhumanism movement – basically, the faith of those who believe that technology will allow us to overcome our notorious human frailties, such as death – is not his first: there has previously been a scholarly work on John Banville, and an ebook titled Epic Fail: Bad Art, Viral Fame, and the History of the Worst Thing Ever. Yet there is a sense that, those efforts notwithstanding, O’Connell is finally making his debut. With the clout of a major publisher behind him, he now gives full flight to his cultural alertness and observational smarts.

Having anticipated this meeting of writer and subject since first getting wind of it, I must report that as I read the first fifty or so pages I experienced a mild, creeping disappointment: whatever artful new shape I had hoped O’Connell’s talent would forge, this was not quite it. What we had here, it seemed, was pretty much a straight-shooting work of journalistic non-fiction. After an initial confession of the nature of his interest in transhumanism – O’Connell is drawn to the movement by a fascination with death, which is heightened by his having recently become a father – the authorial self politely recedes from the foreground, making way for a dutiful focus on the human and conceptual quarry.

Once any unfair expectations of genre-dissolving novelty have been put aside, what comes into focus is a delight. To Be a Machine is, among other things, a journey into the American Weird, and a topography of a Bay Area vanguard where the line is dissolving between technology and metaphysics, science and faith. On a series of trips, mainly to the USA, the mild and reasonable O’Connell meets a procession of driven, fanatical, visionary men (and the occasional woman) professing beliefs so outré that they often strike the author as insane. There are the Silicon Valley billionaires who confidently await the coming of the Singularity, when humankind will be uploaded into an everlasting noosphere; the cyberpunk slackers who disdain the squidgy frailties of incarnation and ‘biohack’ their own bodies; the vastly bearded, table-pounding gerontologist Aubrey de Grey, who wages jihad against death itself. As O’Connell passes the mike among this loose consortium of more or less sympathetic nutters, the book reads like an intellectually amplified episode of Louis Theroux’s Weird Weekends.

More so than Louis Theroux, O’Connell is a confident swimmer in the deep waters of idea, and To Be a Machine is as much concerned with transhumanism’s philosophical roots as with its scientific basis. O’Connell discerns traces of derelict religion in the fears and longings of his subjects: ‘Beneath the talk of future technologies, I could hear the murmur of ancient ideas.’ The epigraph is tellingly provided by Don DeLillo, whose uncanny readings of modern life have clearly informed O’Connell’s perception of an America where the old gods may have vanished, but the faith has not. The aforementioned Aubrey de Grey reminds the author of ‘a medieval saint: the fanatical thinness, the holy fury in the eyes.’ Ray Kurzweil’s utopian eschatology is described as ‘a kind of computational pantheism… an algorithmic immanence.’ Rationalism itself, cathected with a zeal once channelled into the monotheism it has helped to undermine, becomes the ironic repository for the prayerful hope of escaping the human tragedy. ‘Magical rationalism’, O’Connell terms this odd development whereby reason becomes the handmaiden of unreasonable beliefs. Transhumanism, he suggests, is ‘the event horizon where Enlightenment rationalism, pushed to its most radical extremes, disappeared into the dark matter of faith.’

In a handful of domestic interludes O’Connell brings it all back home, underscoring the timeless sorrows driving the transhumanist quest via vignettes from family life. A modern, secular couple, the author and his wife falter when the moment comes to enlighten their infant son as to the stark reality into which they as progenitors have ushered him – specifically, the fact that mammy and daddy and baby himself are condemned to annihilation. The mother assuages her son’s panic by explaining that men are at work right now on the problem of death – ‘that’s what Dada’s book is all about’ – which may be solved in time to avert what the young lad understandably considers an appalling tragedy. ‘When you’re big’, she tells him, ‘maybe nobody will have to die any more’. It’s a kitchen-sink dramatisation of a scenario as old as civilisation: unable to bear (or divulge) too much reality, the O’Connells resort to the faith-based illusions that they, as a post-Catholic Irish couple, had ostensibly renounced.

It is this intimate awareness of all-too-human frailty that gives To Be a Machine its emotional force, which radiates through even the most cerebral passages. O’Connell is no transhumanist, but his empathy prevents the book from becoming a mere parade of eccentrics. Transhumanism is a Promethean revolt against an intolerable fate, but for O’Connell, any meaning life may have is inseparable from the animal facts of finitude and loss that the transhumanists contest. ‘I never loved my wife and little boy more’, he says, ‘than when I thought of them as mammals.’

A dizzying chapter considers the apocalyptic possibility – taken seriously by such Alpha Brains as Bill Gates, Elon Musk and Stephen Hawking – that artificial intelligence could, as an awkward side-effect, obliterate all matter in the universe. Meditations on robotics and cryogenic preservation are less startling: the futurity these phenomena represent feels retro next to the info-theology espoused by the Singularity set.

A five-star set-piece brings the curtain down: the author climbs aboard the ‘Immortality Bus’, accompanying a transhumanist candidate for the 2016 US presidential elections on a coast-to-coast campaign trail. Decked out like a coffin, the knackered bus threatens to career off the road and plunge into a ravine ‘in a blaze of chintzy irony’. Like a twenty-first century revamp of Ken Kesey’s Merry Pranksters, tripping not on LSD but on the promise of eternal life by way of really good computers, the transhumanist entourage mock ‘deathist’ ideology and recruit allies for the greatest humanitarian crisis the world will ever face – mortality.

Not naturally possessed of the cruelty of the born satirist, O’Connell renders even the oddest fanatics relatable, but he is adept at quietly demolishing the dangerously deluded when he sees fit. His preferred weapon is a finely calibrated irony, which leaves its target standing naked after a series of deft swipes. Here he is on Ray Kurzweil, PR-friendly Singularity guru and Director of Engineering at Google:

He takes a goal-oriented approach to cosmology, imposing upon the universe itself a kind of corporate project-management structure, composed of a series of key deliverables across deep time.

The problem was not, in other words, that his fellow scientists found his claims ridiculous and false. It was far worse than that: they were afraid of being convinced of the truth of those claims and thereby coming to seem ridiculous themselves. And so what was preventing the mass of his fellow gerontologists from being persuaded by his work was, if I understood him correctly, precisely the irresistible force of its persuasiveness.

O’Connell is a crafter of unwaveringly graceful sentences; even those bearing the heftiest informational payloads are as light as feathers. As enjoyable a book as any I’ve read recently, To Be a Machine is a work of acute intelligence, wisdom and empathy that catapults its author straight into the front ranks. We can only hope that Mark O’Connell’s elegant, searching mind will cast light on our murky times over many books to come.