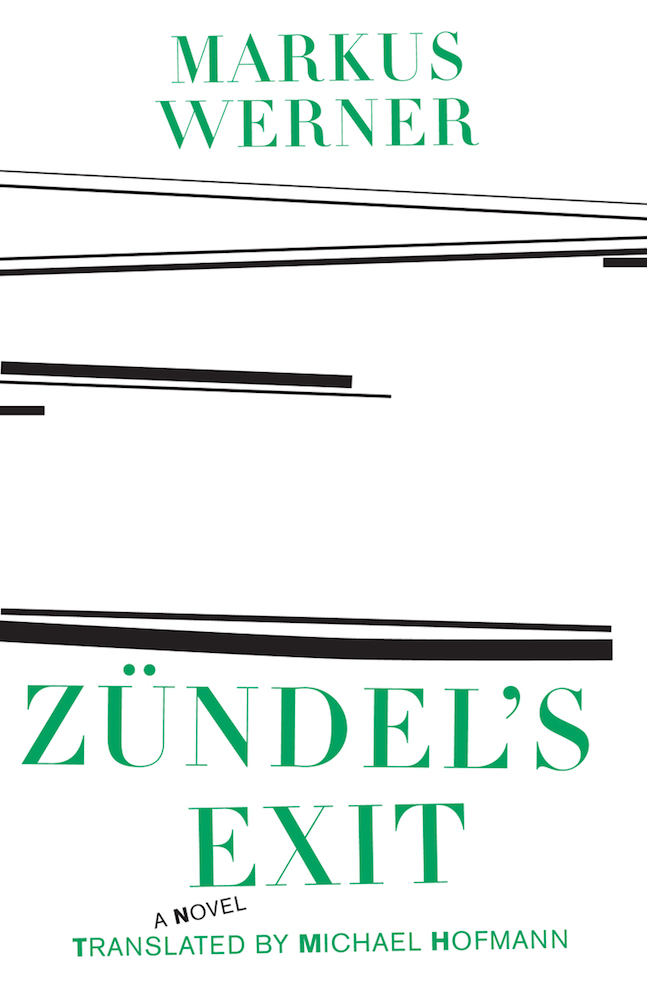 Poor Switzerland. Its very success in achieving the goals that other European nations aspire to—stability, prosperity, long-lasting democratic harmony—has made it the object of a certain smug condescension, grounded in a Nietzschean machismo which insists you can only be a real culture if you’ve torn yourself apart with brutal conflicts, political frenzies, or the slow poison of dark institutional secrets. And yet, when it comes to Swiss literature, the condescenders might seem to have a point. Who, after all, are the world-renowned Swiss authors? Only a handful spring to mind: Rousseau, who feels more French than Swiss; Jung; Robert Walser, perhaps. Could it be that the Swiss have just not suffered enough to write great books?

But that is to consider only the grand schema. Markus Werner’s debut novel, Zündel’s Exit, published in German in 1984 and newly translated by Michael Hofmann, suggests a lively forest floor beneath the thin canopy of world-famous Swiss names. Admirably brief, funny, and travelling light while possessed of considerable depths, Zündel’s Exit recounts the process of disintegration whereby Konrad Zündel, a thirty-three year-old schoolteacher in Zurich, falls irretrievably out of the everyday world. Returning from a solo trip to Ancona, Italy, near the end of his summer holidays, Zündelcomes to suspect his wife, Magda, of having an affair. Following an argument, Magda leaves town to stay with her sister. Zündel, brooding on the countless humiliations that have defined his entire life, decides to leave his wife, job, and bourgeois existence behind. He travels to Genoa, where his misfortunes accumulate and his psychic condition deteriorates. Memorably comic scenes of humiliation are spliced with unsettling philosophical ruminations as Zündel, an inveterate pessimist, sees his darkest suspicions about life—and women —come to pass. His staggering from one undignified spectacle to the next is pure slapstick. He is caught peering through a keyhole at lovers in the shower. His attempt to buy a revolver with which to shoot himself comes to an ignominious conclusion. His tooth pops out while he is talking to a pair of Swiss tourists. After getting wasted in a sleazy Genoa bar, he is chased down a lane by two policemen, where he falls to his knees, vomits, and pisses himself. A woefully sordid encounter is had with a prostitute in a room with a ‘plastic wastebasket beside the bed, half full of used condoms’. ‘Amore amore,’ she says ‘mechanically’, while attempting to suck off an appalled Zündel.

Zündel’s breakdown—which, by the end, has taken on near-absolute levels of traumatised withdrawal—is narrated not by Zündel himself, but by his friend, Viktor Busch, a pastor with access to the notebooks that Zündel filled during the weeks in which the story is set. This indirect narration is coupled with a scarcity of descriptive detail: we learn little about the characters’ appearances, and half of the novel elapses before we are casually informed of things like Zündels age and Busch’s profession. There is a distancing effect in this minimalism of detail, so that we never attain the kind of intimacy with Zündel that a more exhaustive novel might offer. But there is just enough for us to care, and the sketch-like prose allows us to see Zündelas a European Everyman, or Underman—the kind of resentful, needy, incorrigibly romantic beta-male also rendered by Michel Houellebecq, Karl Ove Knausgård, and the like. Zündel allies himself with the ‘sheep’ of the world: the timid, harried ones who want only to get through life as best they can without being mauled by the ‘wolves’. He wishfully imagines a future wherein the ‘sheep’ grow claws and exact a ‘merciless’ vengeance on their tormentors. Otherwise, both Werner and his protagonist tend to shun the heroic gesture and the sublime sentiment, opting instead for an immersion in the prosaic and the disappointing, a confrontation with mediocrity compelled by Zündel’s mission ‘to see myself as negligible… as the banal prelude to a rotting corpse.’

What makes Zündel’s Exit stand apart from other pessimistic comedies of human misery, such as those of Thomas Bernhard (of whom there are traces here), is the compassion underlying its depiction of a man’s collapse into isolation and despair. Whereas Bernhard offers only spleen and the loathing of other people, Werner, via the device of having Zündel’s story recounted by the pastor Busch, affords us an alternative, kindlier perspective on love and the human situation than the one which has consumed Zündel. Through his respectful depiction of his friend’s crisis, Busch comes over as an admirable, modest character, the type never found in the works of cynics like Bernhard. We are assured early on that Magda has not, in fact, been unfaithful—Zündel is a victim of his own propensity to believe the worst. Though Zündelsuccumbs to misogyny (he even writes a drink-fuelled ‘memo for men’, bullet-pointing the frailties of womankind), Werner situates this misogyny within a broader emotional landscape so that it does not inundate his novel, nor give the sense that Zündel’s rage is a simple vehicle for the author’s own bitterness. In the end, Zündel’s tragedy is not his inability to endure what he calls his ‘habitual slither through life’, but his turning away from the sources of love that are available to him (his wife, Busch, and Nounou, a woman he sleeps with in Italy). There are opportunities for salvation, but Zündel is a congenital biter of the hand that feeds, and finally the author of his own destruction.

The unseemliness of the act of writing is one of the novel’s most interesting preoccupations. Zündel is a frustrated writer—or rather, an embarrassed writer, compelled to write yet convinced that to do so is an act of vanity, a contemptible drawing of attention to oneself. ‘Whoever isn’t prepared to get through life in discreet silence and without leaving his mark anywhere is a publicity-crazed scribbler.’ He confesses that he ‘wouldn’t mind writing a little novel, were it not that so doing would reveal myself to be a self-important so-and-so, who—like any writer—has eyes only for himself.’ If these are Markus Werner’s concerns as well as his character’s, we might speculate that his novel’s elegant compression, its care in not outstaying its welcome, are the product of authorial delicacy—the closest Werner could get to the blank page that Samuel Beckett suggested would be his final work. In a conversation with Busch, Zündeldisparages ‘all those secret writers, with their desk drawers full of yellow pads, schoolteachers in the main… who exceed the median by that one hair’s breadth that you need to be aware of your own mediocrity and suffer from it’. Elsewhere, he professes disillusionment with literature and those who perpetrate it: ‘you dolled-up yarn artists… Your chitchat’s at the root of my trouble… I want action, not the book.’ For all his misgivings and embarrassment, though, Zündel does want to be read—his notebooks have been posted to Busch on Zündel’s instructions, following the latter’s disappearance. Zündel’s ‘little novel’ gets written after all. As Emil Cioran, another pessimist who wrote from an acute sense of the vanity of writing, put it, ‘Writing is the creature’s revenge, and his answer to a botched Creation.’

The dialogue in Zündel’s Exit tends to be clunky and unnatural (a near-universal drawback of fiction in translation), and a grandstanding finale sees Zündel’s revolt deteriorate into a rather trite, establishment-slagging anti-heroism. These blemishes, though, are all-but effaced by the pleasures on offer in Werner’s excellent debut. What is enacted so entertainingly in Zündel’s Exit is the inability to live, the consciousness of life’s intolerability. As Zündel broods, ‘Everything is hostile, everything that happens to me exceeds my capacity to endure it… Sooner or later, everyone feels unviable.’ Strange truth of human existence: by virtue of the billions of spermatozoa each of us outraced to breach the egg and win that seminal contest, we should all see ourselves as natural conquerors, a race of Genghis Khans and Cleopatras who, upon meeting one another, ought to embrace in the joyful recognition of a fellow Master. Far more common, though, is the feeling, secret and terrifying, of not really being up to scratch, nor even of belonging here, the sense that all the others are in on some key notion that has always escaped us, and are complete in a way we have never been. To be human, perhaps, is precisely this condition of never feeling fully human, suspecting oneself of being a mere hodgepodge of sensations, pain, and organic matter that staggers through life above an abyss of dissolution. Zündel’s Exit, in its modest, humorous way, speaks from and to this not-quite-human condition.